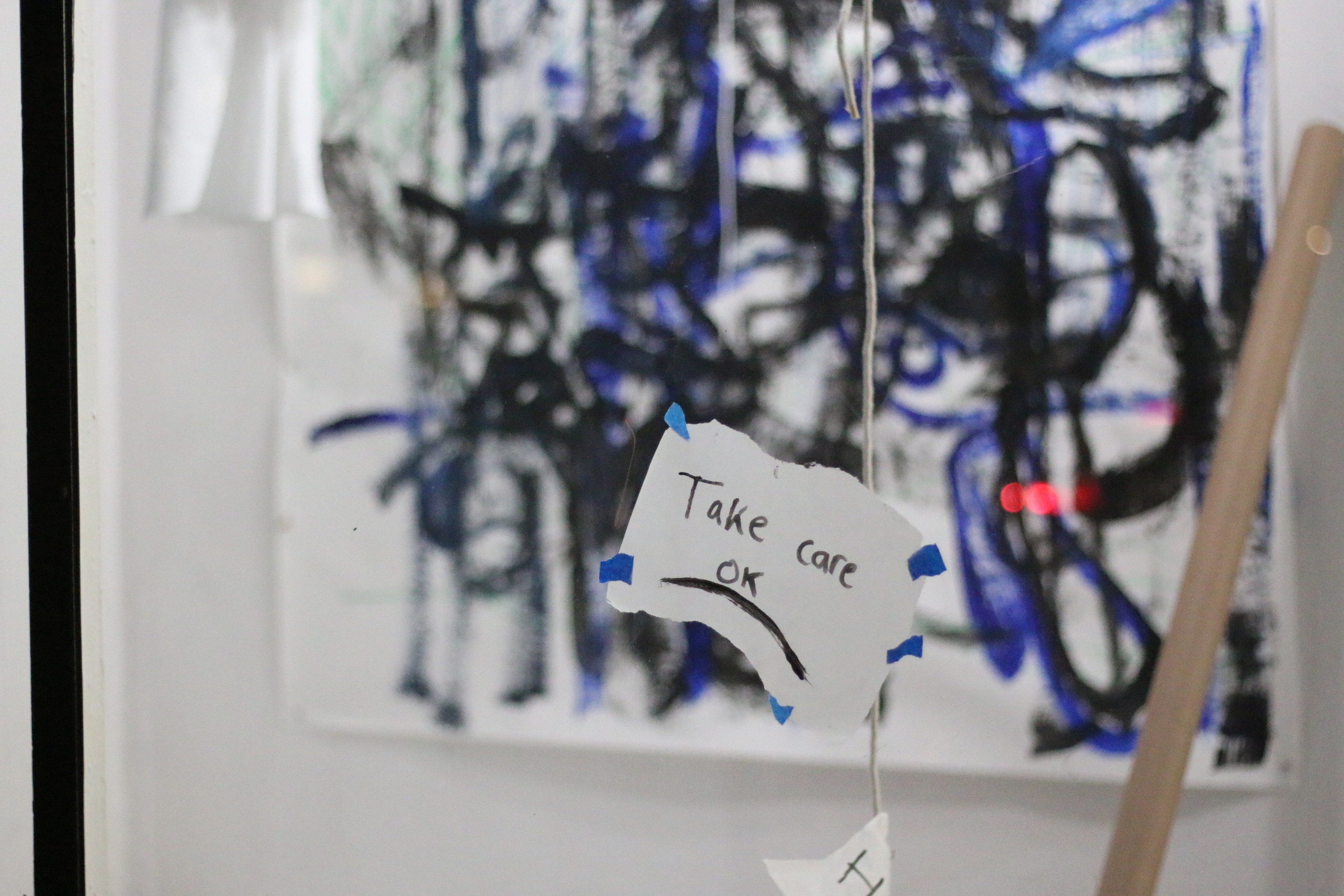 In the final hours before the six-county Shelter in Place order came into effect in Northern California, signs went up, people gathered for last drinks, and the homeless tried to find warm places to sleep. Here are some scenes from San Francisco’s Mission District and the Castro, just before the order came into force. 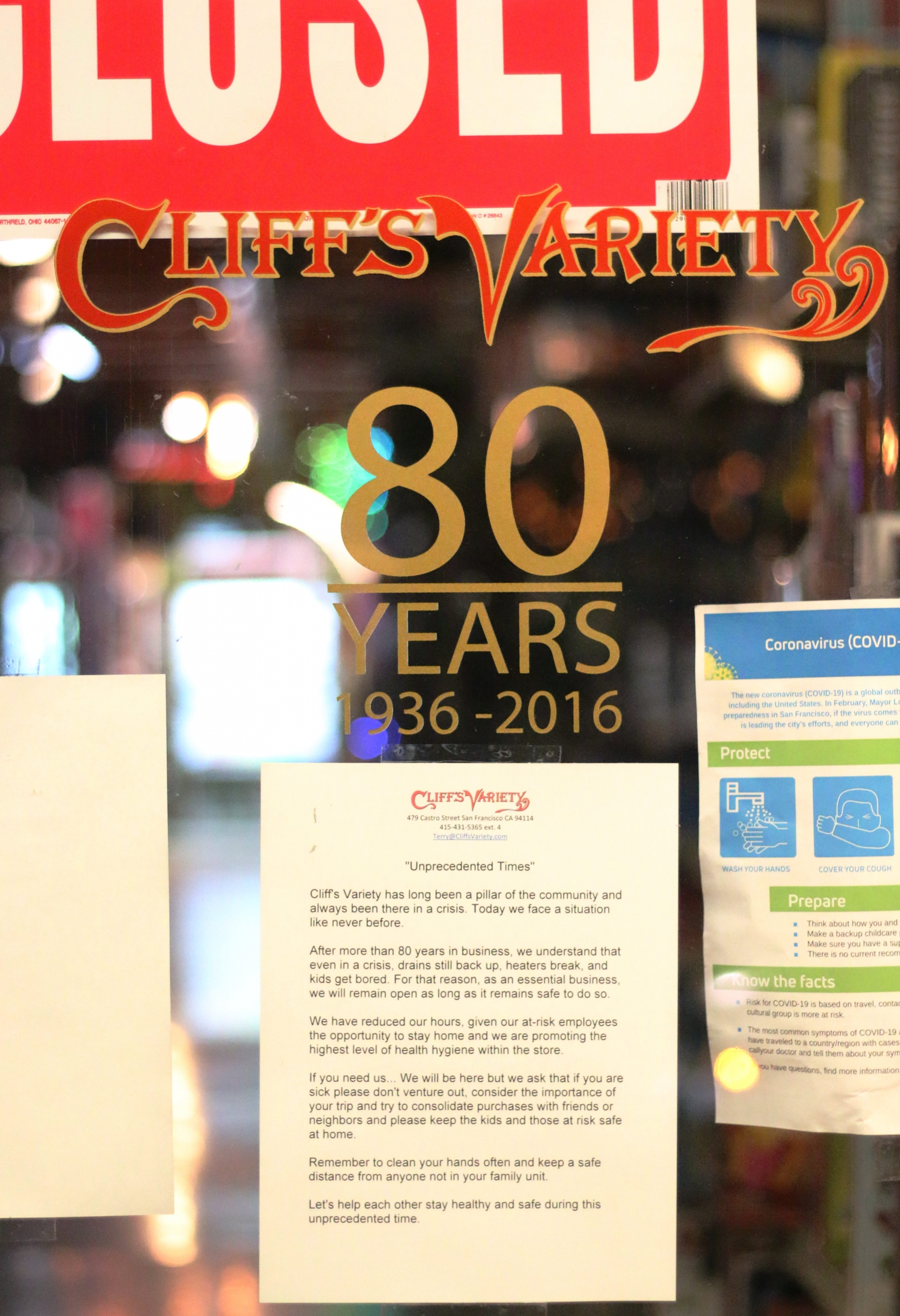 Cliff’s Variety is a hardware and home goods store which has a cornerstone of the Castro area of San Francisco, even since before it was know as a haven to the gay community. Hardware stores will remain open, but many are limiting their hours and the number of people who can be in the store at any one time. 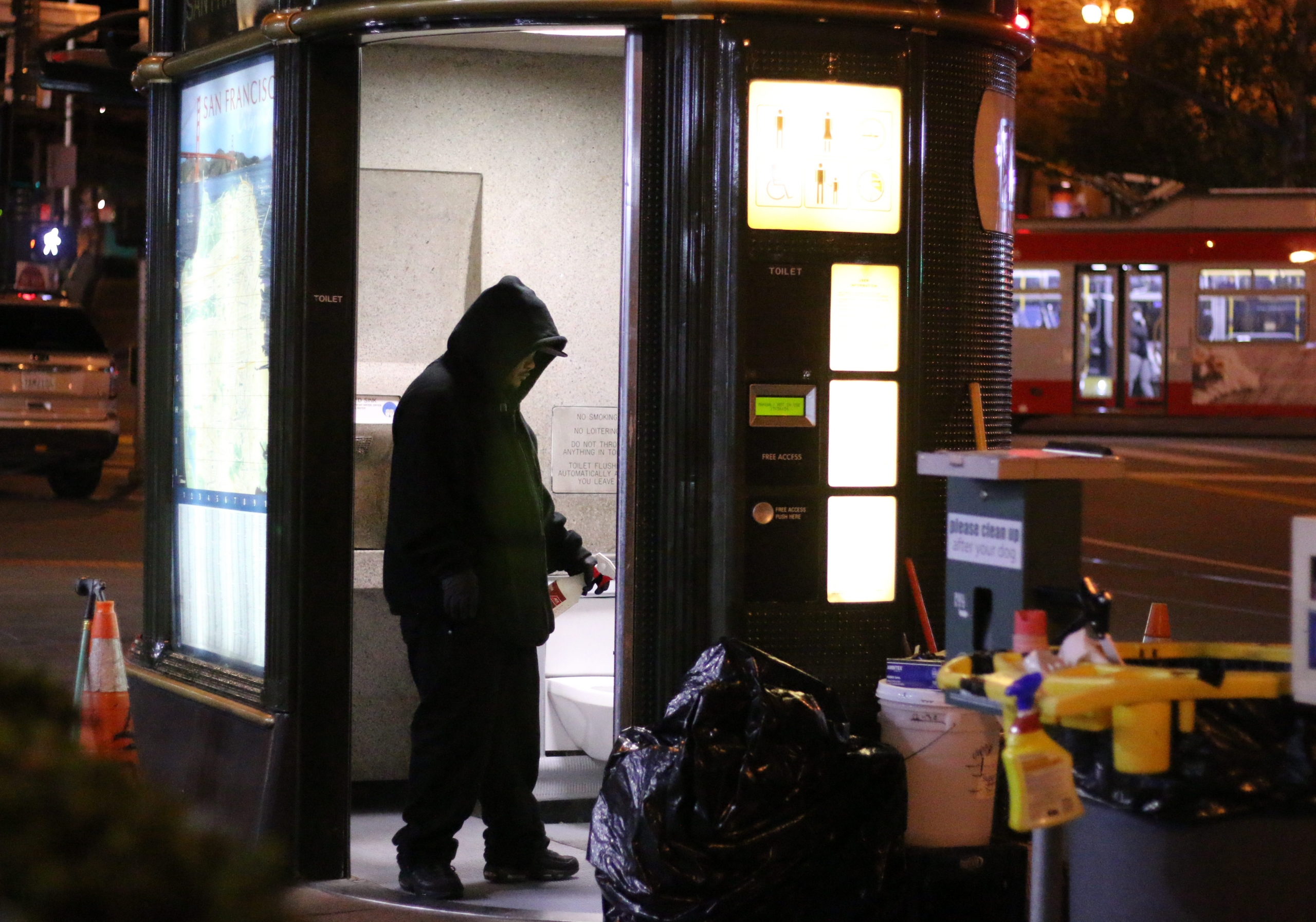 A San Francisco city worker disinfects a public bathroom late at night in the Castro area. Homelessness is prevalent in the area, and many homeless people rely on these public bathrooms for health and safety. 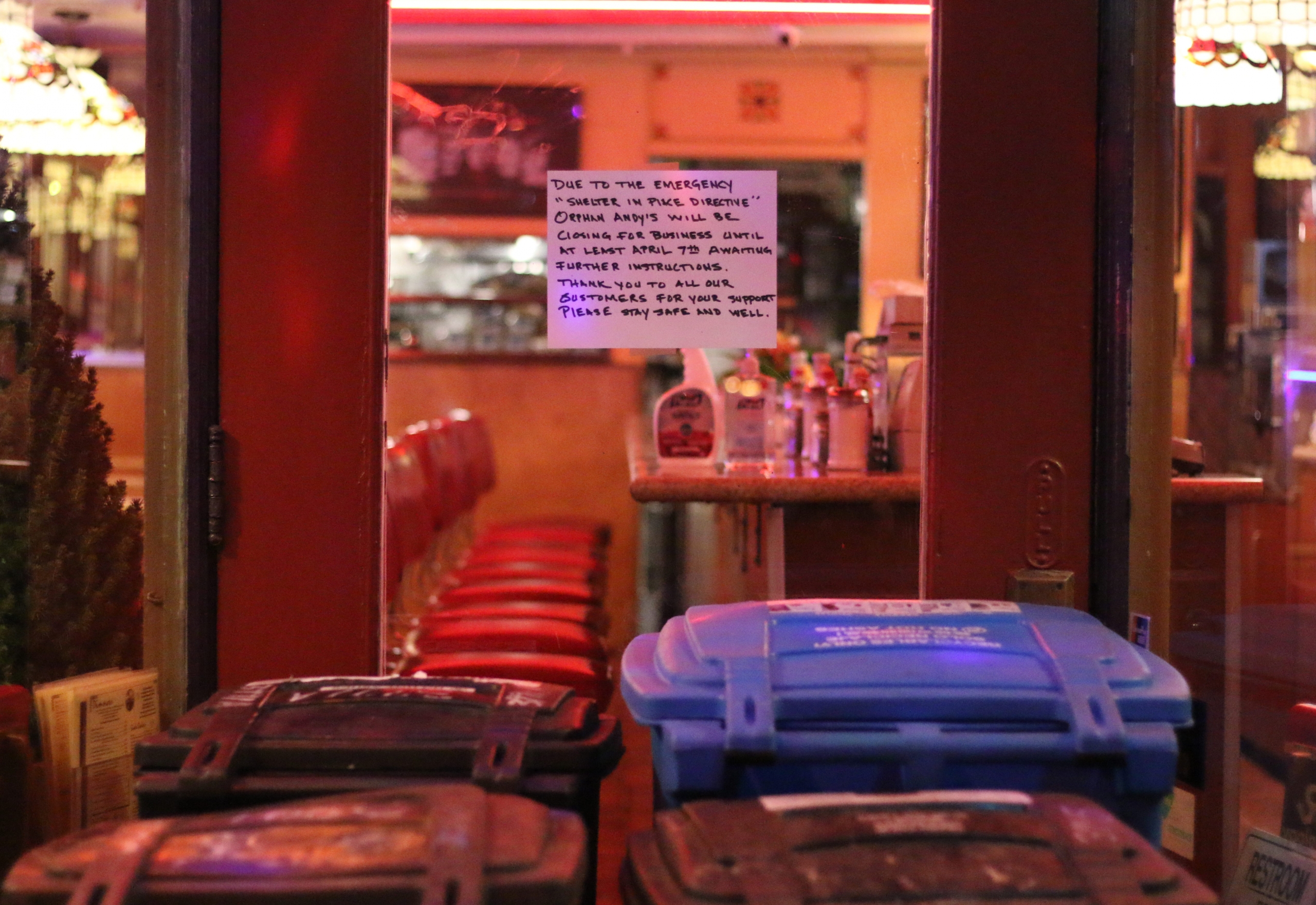 Orphan Andy’s, a diner in the Castro, shuts its doors following the Shelter in Place order. 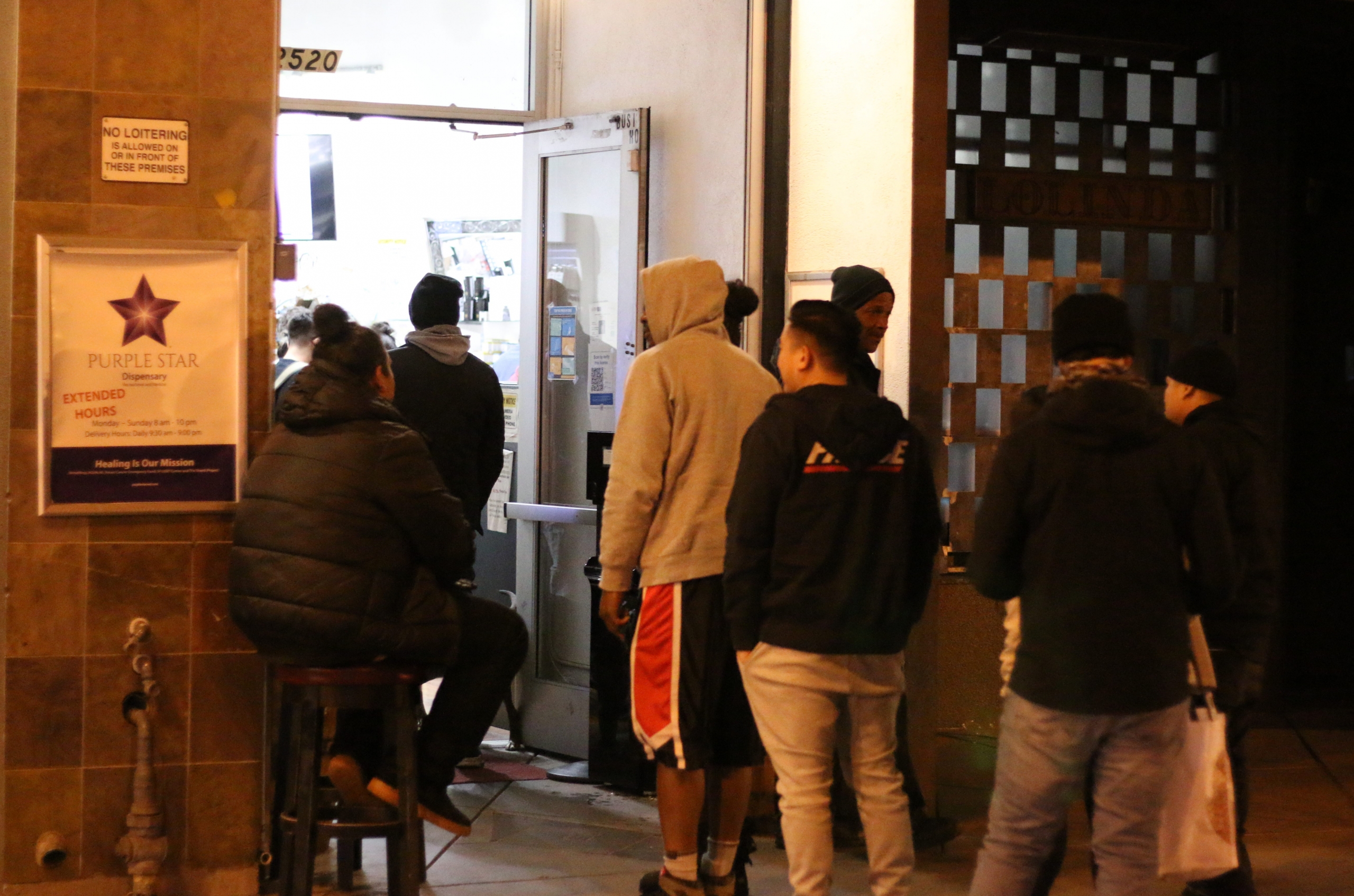 The Purple Star cannabis dispensary serving customers lining up out the door as people prepare to hunker down in San Francisco’s Mission District. 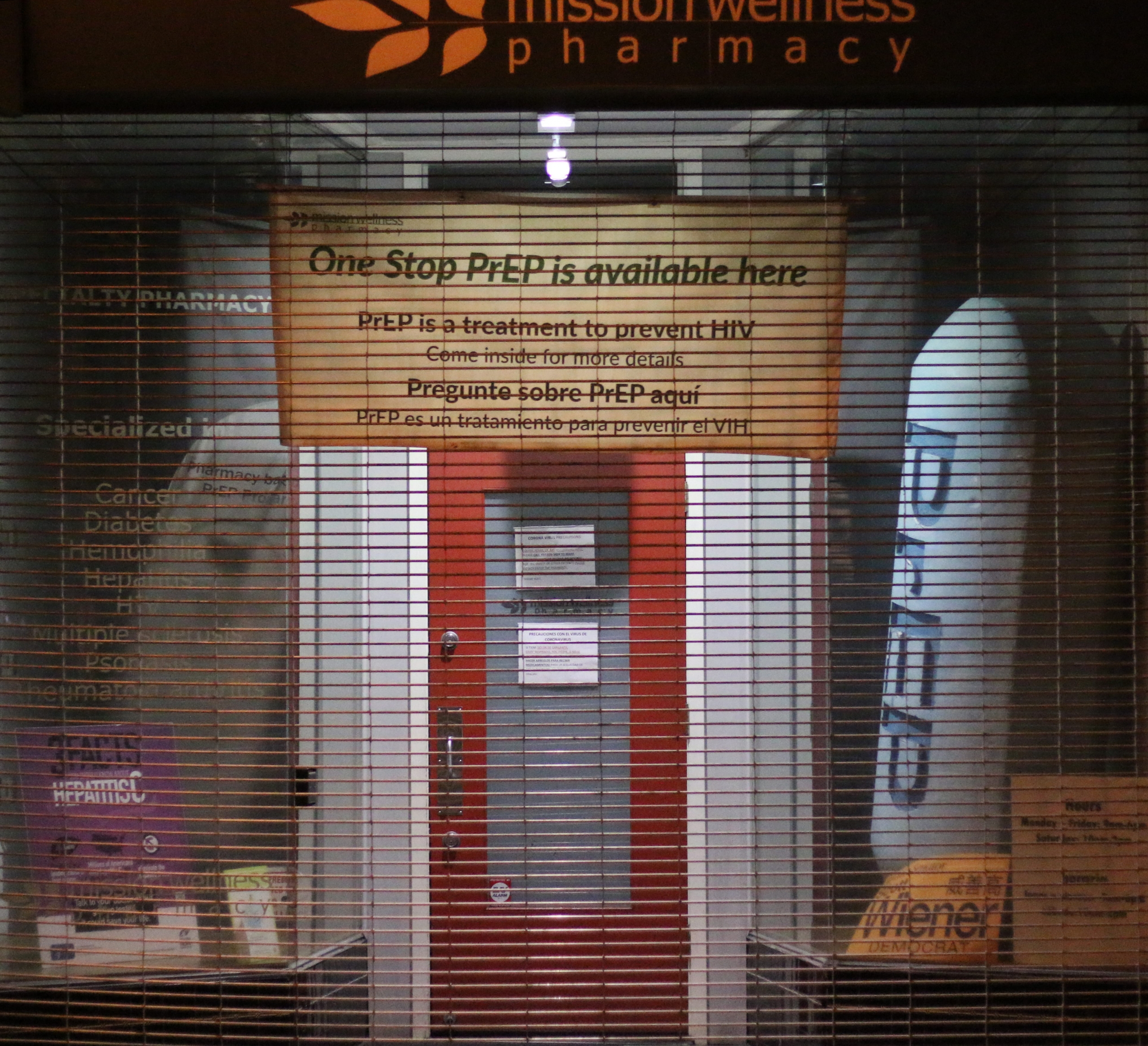 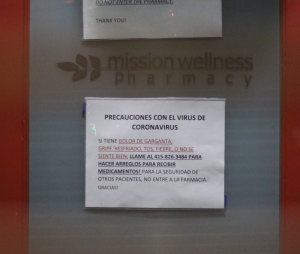 A Mission District PrEP clinic is closed by the Covid-19 Shelter in Place order, putting people in the community more at risk for HIV transmission. PrEP stands for Pre-Exposure Prophylaxis, and is often given to people at high risk of exposure to HIV, like injection drug users, mixed status couples, and sex workers. PrEP therapies are highly effective at stopping the transmission of the virus, but only if taken daily. 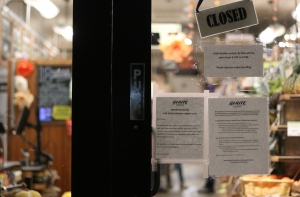 Birite, a small high end grocery store near Mission-Delores. Late at night employees are chatting in the closed store, in advance of the Shelter in Place order. Stores have been jammed with people for the past week in San Francisco.

Markets are changing their hours and controlling access, trying to clean and stock shops while keeping their employees and customers safe. 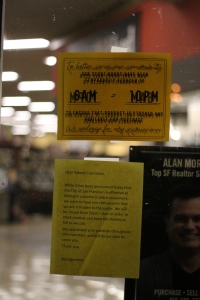 The 24 hour Safeway announces new hours to give employees a chance to clean and stock the story. 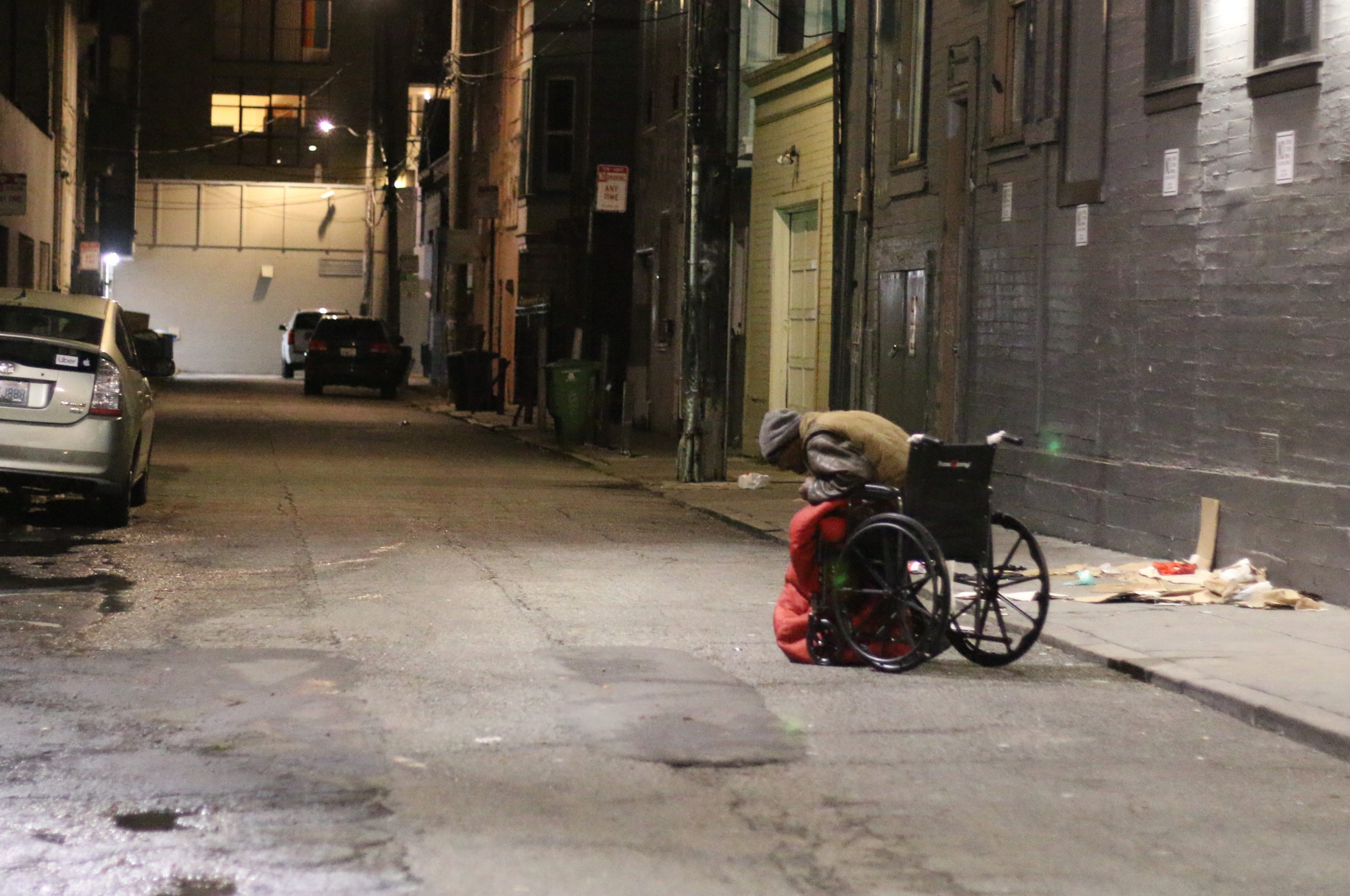 A homeless man in a wheelchair makes his way along a dead-end street next to the 16th and Mission BART station in San Francisco. Having nowhere to go, the homeless are exempt from the Shelter in Place order. Governor Newsom of California has begun securing hotel rooms to bring the homeless inside, but it’s  a fraction of what’s needed to help with the enormous homeless population of the Bay Area. 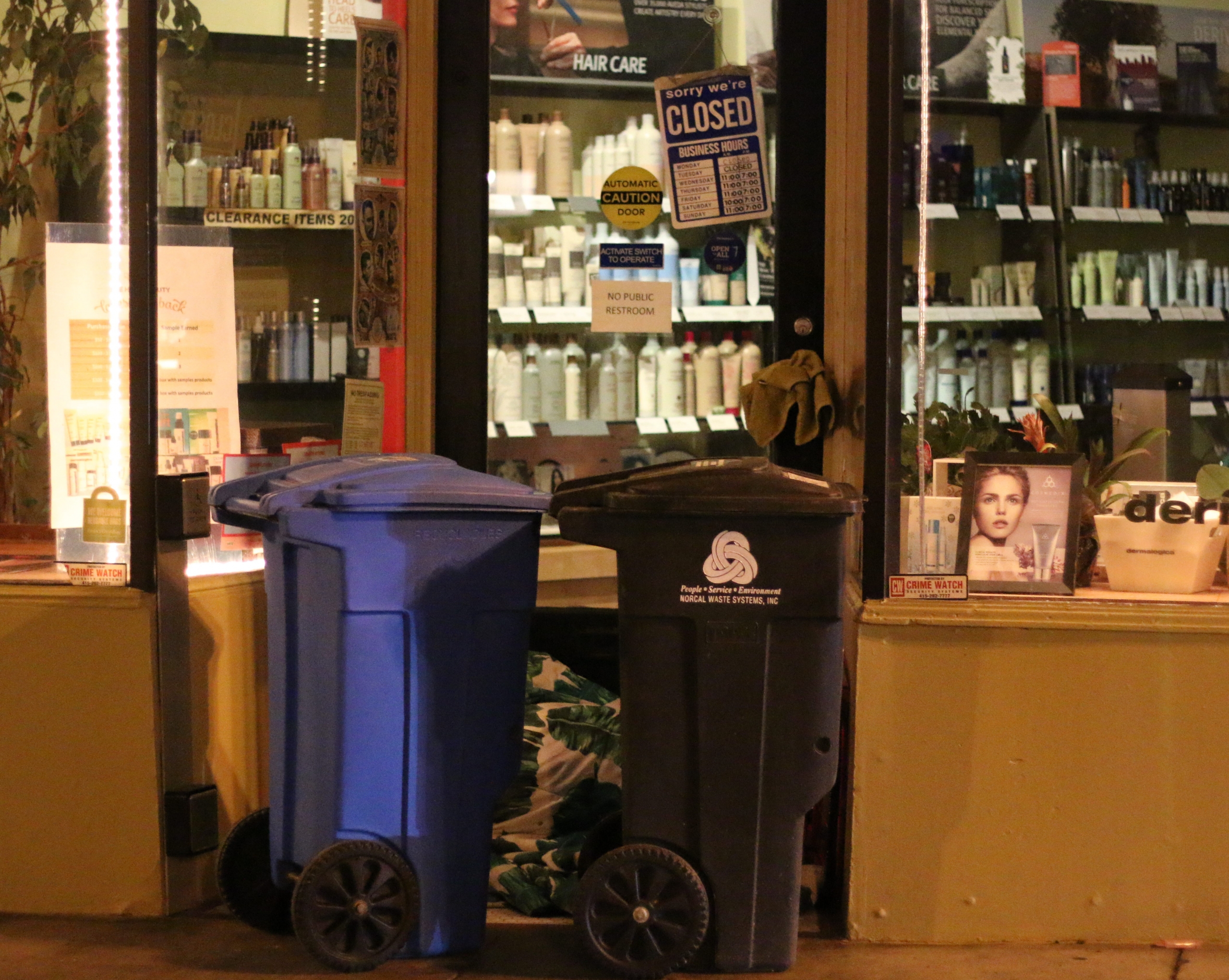 Two bins in front of a salon in the Castro area of San Francisco protect a homeless sleeper. Salons won’t be among the essential services that can remain open under the Shelter in Place order, and their workers rarely have any form of paid time off. 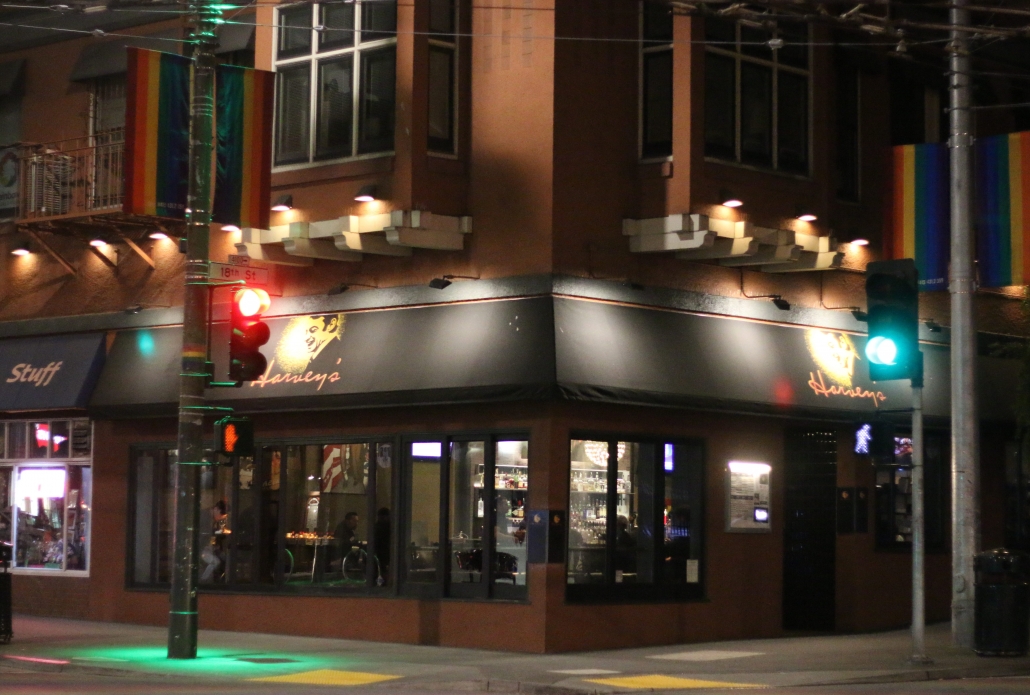 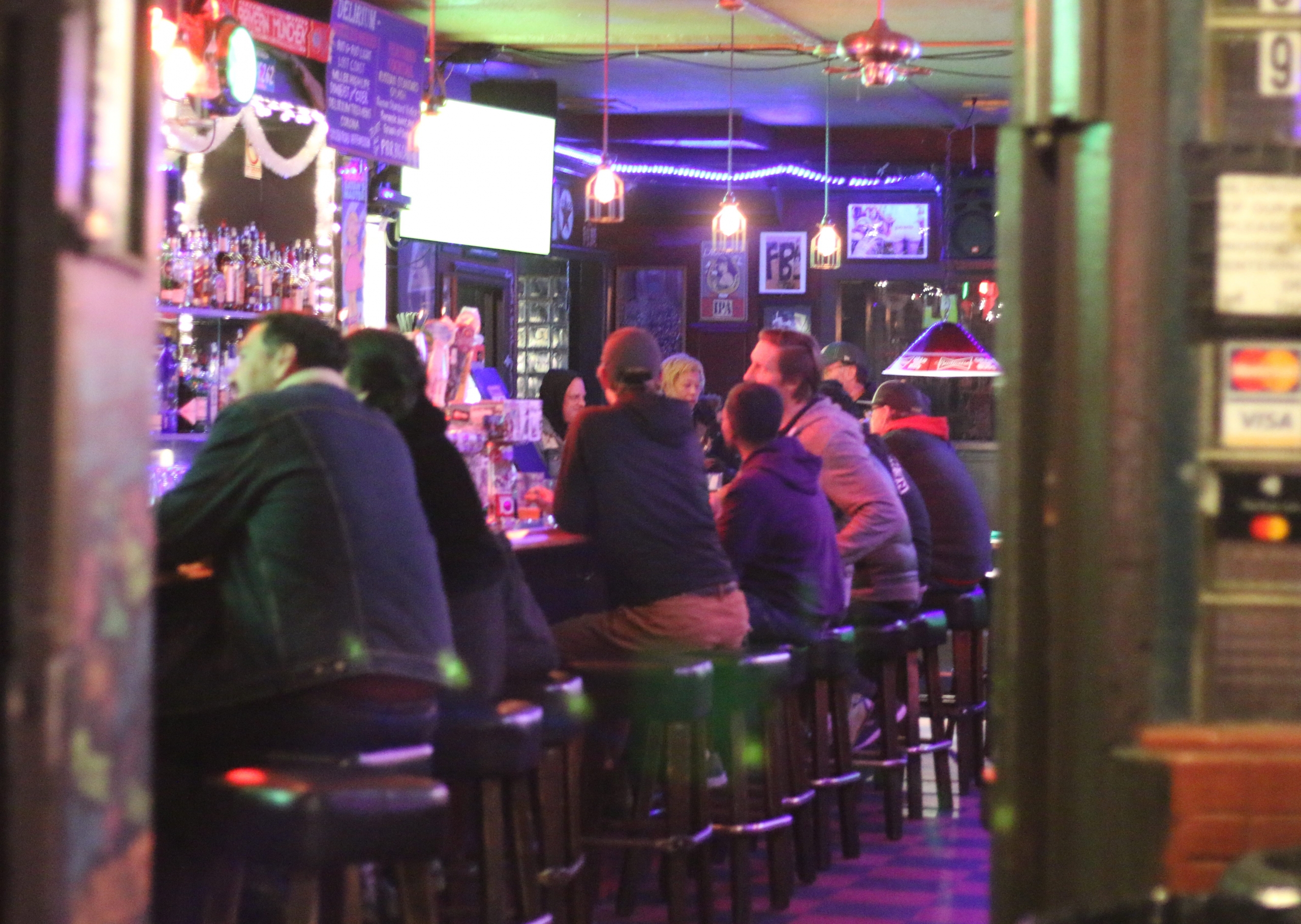 Bars in the Mission District that were still open as the Shelter in Place order was about to take effect were often filled, with possibly unwise patrons trying to get in last drinks. 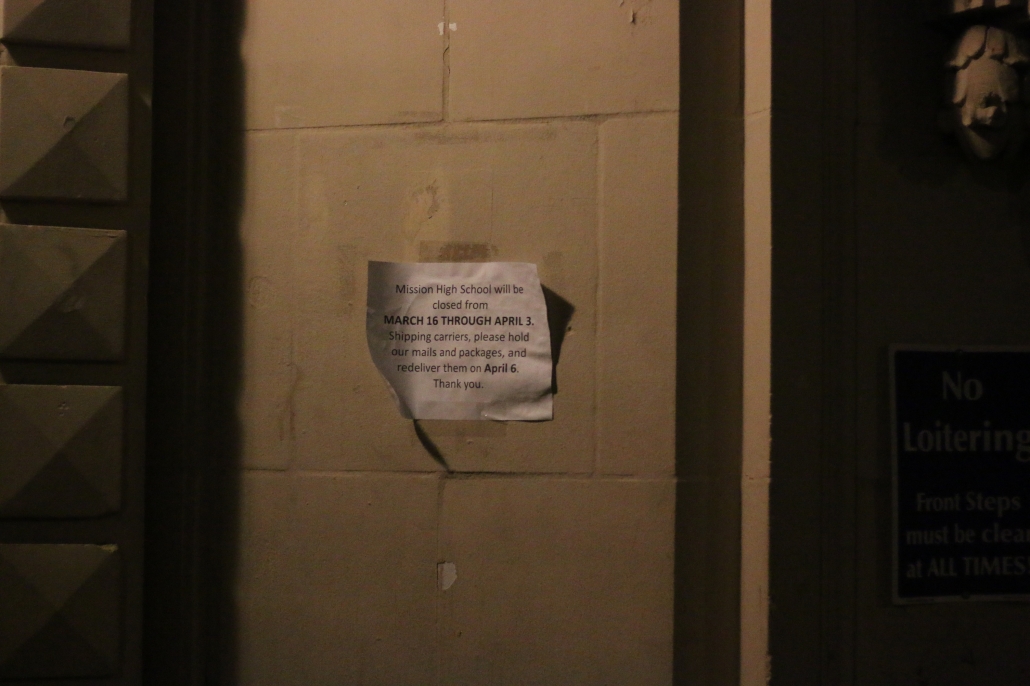 Schools in San Francisco, like Mission High School are closed until April, though it seems possible they won’t reopen for this school year as the pandemic progresses. 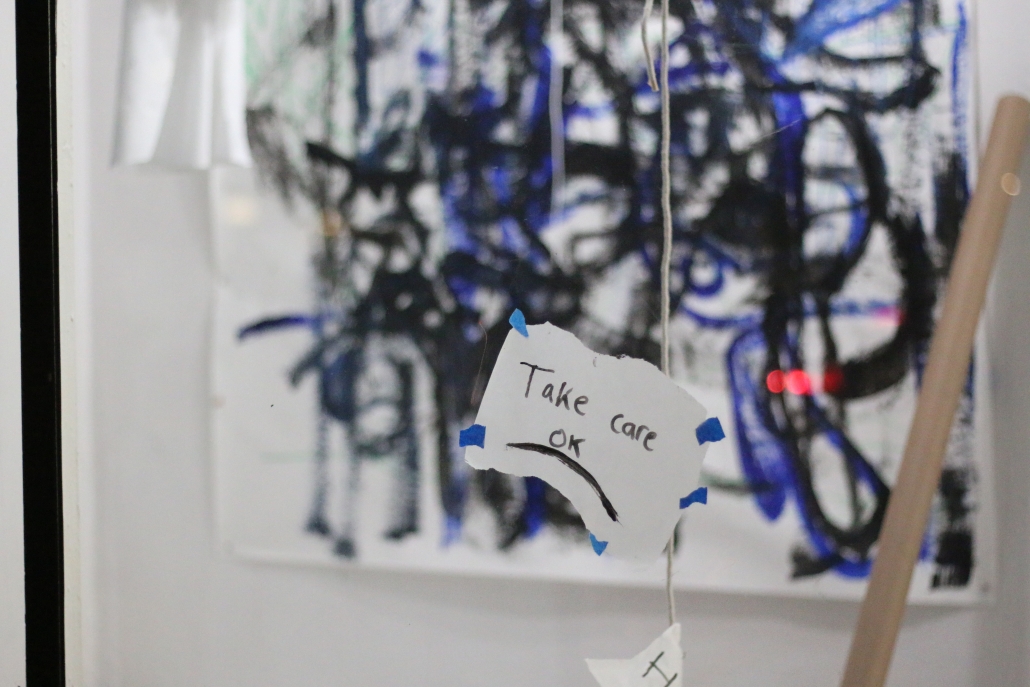 Take care of each other.

Three Things: Even More Family Fun with COVID-19 Introduction To New Series: The Public And Its Problems by John Dewey