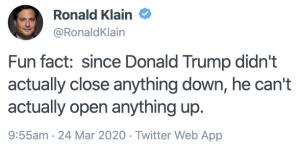 Trump Threatens to Withhold Disaster Declaration for Michigan because Gretchen... Dispatch from the War on COVID-19 [UPDATE-1]