Trump And Southern Governors Team Up To Kill Republican Voters 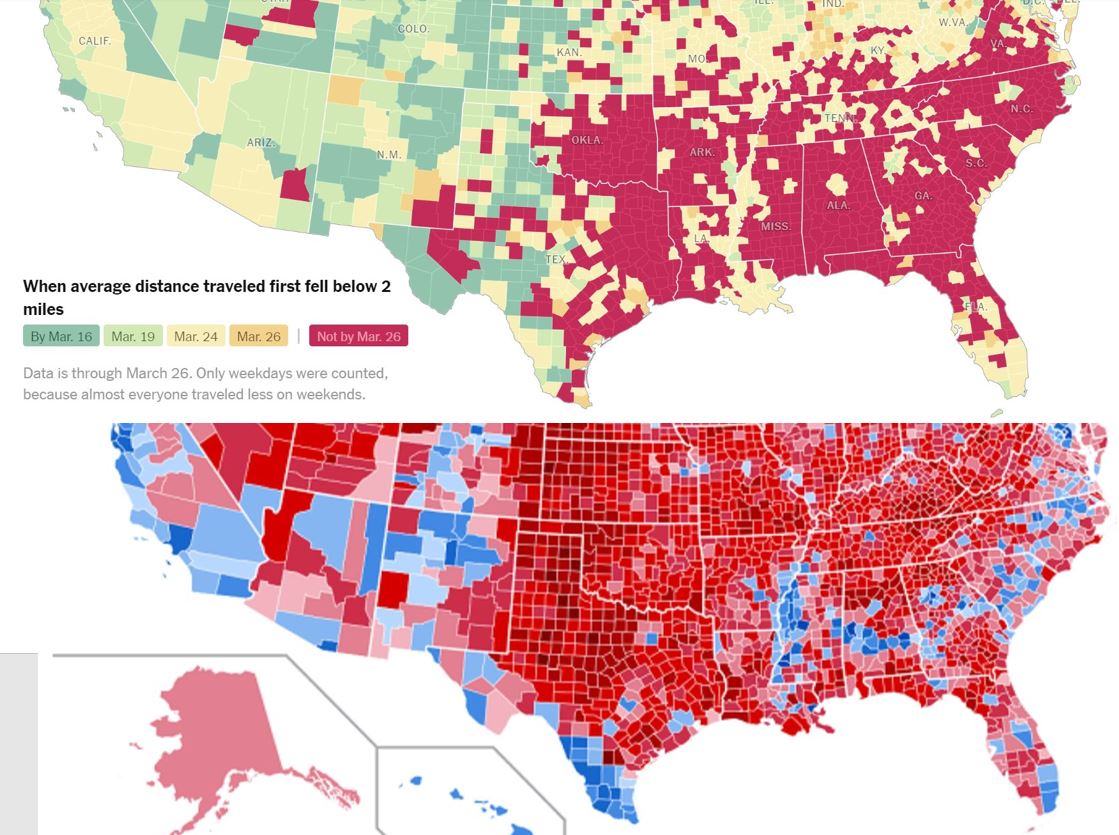 The New York Times is out with another set of jaw-dropping cell phone data. This time, the analysis addresses, on a county by county basis, when various areas reduced their average travel below two miles a day. When I saw the map, it immediately looked to me like the map for the 2016 presidential election results. Because the areas where people still had not curtailed travel by March 26 were primarily in the South, I grabbed that section of the map and pulled a similar cut from a map of the 2016 voting results. 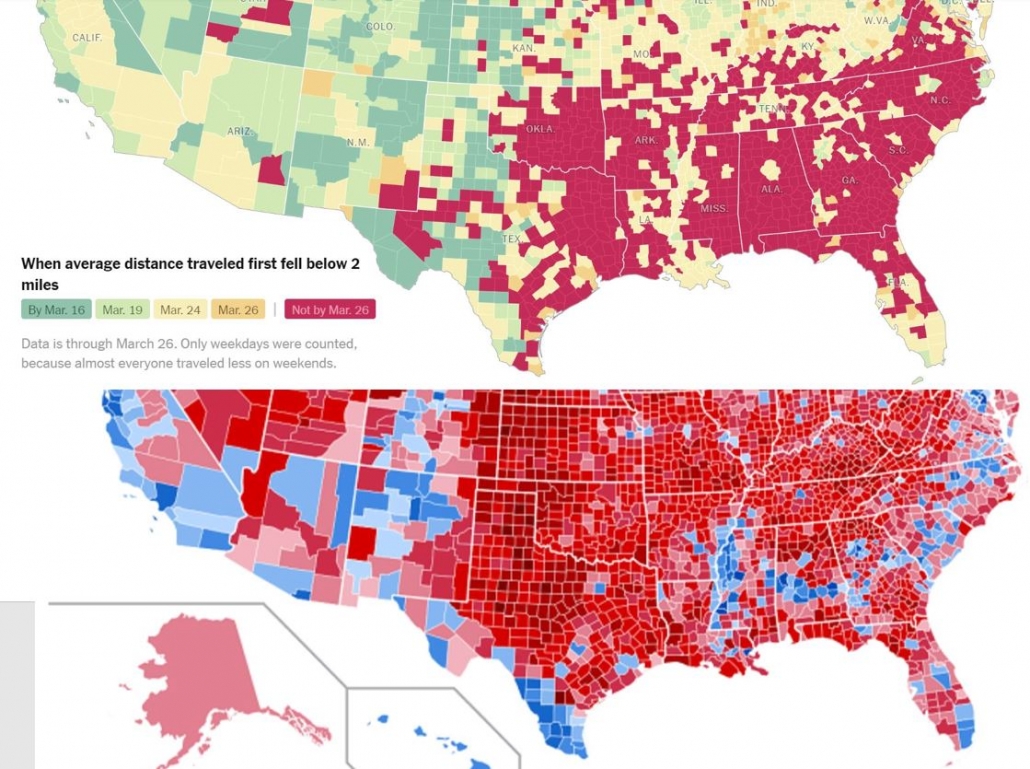 There really isn’t much that needs to be added to this, other than to point out that Southern Republican governors, by delaying statewide stay home orders, allowed control to devolve to the county and city level. The small pockets of blue you see in the 2016 election results overlay almost perfectly on the pockets which shut down despite the lack of action by Republican governors. My little island of blue, Alachua County, stands out nicely in north central Florida. Note also how isolated the Birmingham area is in Alabama. This map makes it not at all surprising that Birmingham elected a progressive mayor in 2017.

The correlation is not complete, as I’m a bit stumped by St. John’s county appearing to have shut down travel around the same time as Alachua County. I don’t think they ever did a county shut down, and in fact they didn’t even close their beaches until March 29, after a viral photo showed massive numbers of people on the beach on the St. Johns side of the line at Duval County on March 28.

What the Times map shows, though, is that we have a massive social experiment underway. In the South, red counties have been much slower about curtailing travel (and presumably social contact) than blue counties. According to Marcy’s constantly updated list, Florida, Georgia, Mississipi and Texas have statewide shut down or stay home orders going into effect today or tomorrow. I do hope that the cell phone tracking data collection continues, so that we can see if there even is compliance in these deep red areas. Considering Trump’s early rhetoric and the blather from Fox News, it would not surprise me in the least if compliance is much slower and spottier in these areas.

It almost goes without saying that the longer these areas continue social mixing, the longer the rest of us who are already isolating will have to wait before there can be a consideration of a general easing of restrictions. And, of course, we can sadly expect the death toll to stay high longer in those areas continuing to travel. The end result of this is that Trump’s failure to move quickly on a national stay home order, coupled with red state Republican governors parroting that rhetoric, means that in the South, counties that vote predominantly Republican could see deaths stretching out much farther into the summer than in counties and cities controlled by Democrats who enacted social distancing much earlier.

Update: I am too angry to address this any further than to give this link and a couple of paragraphs:

Hours after Gov. Ron DeSantis issued a statewide stay-at-home order Wednesday, he quietly signed a second order to override restrictions put in place by local governments to halt the spread of coronavirus.

The second order states that new state guidelines that take effect Friday morning “shall supersede any conflicting official action or order issued by local officials in response to COVID-19.” In other words, local governments cannot place any limitations that would be more strict than the statewide guidelines.

Locally, it means Hillsborough County cannot mandate churches close their doors, a rule that drew national attention and the ire of the local Republican Party after Tampa megachurch The River of Tampa Bay held two Sunday services, leading to the arrest of pastor Rodney Howard Browne.

If New York Got a Late Start, Then Trump Hasn’t Even Started Yet Michigan Is Using More a Pessimistic Model than the White House