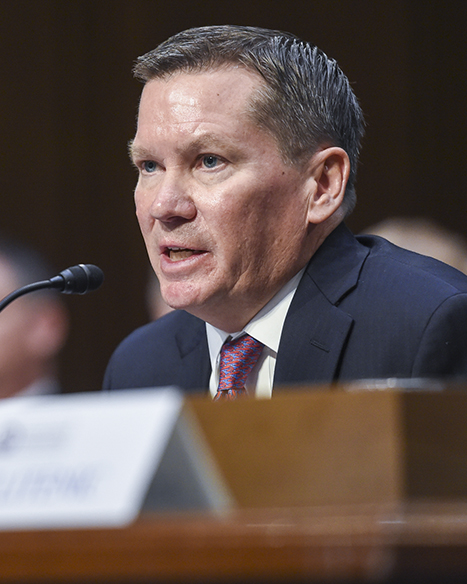 Last Friday, Trump fired Michael Atkinson, the Intelligence Community Inspector General who treated the Ukraine whistleblower complaint as mandated by law. Yesterday, Adam Schiff wrote a letter to Acting Director of National Intelligence Ric Grenell, warning him that the Committee was reviewing whether Trump fired Atkinson to undercut ongoing investigations and asking for assurances Grenell had not and would not tamper in anything the replacement Acting IG, Thomas Monheim, was investigating.

“The Committee is reviewing the circumstances of Mr. Atkinson’s dismissal, including whether his termination was intended to curb any ongoing investigations or reviews being undertaken by his office,” Schiff wrote.

Schiff asked Grenell to provide a written certification to his committee that he would not interfere with the work of future officials in that role and that he certify he has never interfered in the work of Thomas Monheim, now the acting inspector general of the intelligence community.

Grenell responded by acting like the online troll he is, falsely claiming that Schiff had “leaked” (AKA, released) the letter before he actually sent it to him. 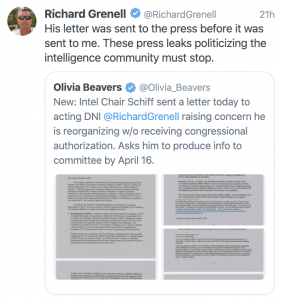 Take all that as background to this ABC story. It describes both the source of intelligence behind a report on how aggressive the virus was in Wuhan, and the chain via which it ended up in Trump’s Presidential Daily Brief in early January.

Concerns about what is now known to be the novel coronavirus pandemic were detailed in a November intelligence report by the military’s National Center for Medical Intelligence (NCMI), according to two officials familiar with the document’s contents.

The report was the result of analysis of wire and computer intercepts, coupled with satellite images. It raised alarms because an out-of-control disease would pose a serious threat to U.S. forces in Asia — forces that depend on the NCMI’s work. And it paints a picture of an American government that could have ramped up mitigation and containment efforts far earlier to prepare for a crisis poised to come home.

“Analysts concluded it could be a cataclysmic event,” one of the sources said of the NCMI’s report. “It was then briefed multiple times to” the Defense Intelligence Agency, the Pentagon’s Joint Staff and the White House.

From that warning in November, the sources described repeated briefings through December for policy-makers and decision-makers across the federal government as well as the National Security Council at the White House. All of that culminated with a detailed explanation of the problem that appeared in the President’s Daily Brief of intelligence matters in early January, the sources said.

The intelligence came from wire and computer intercept and satellite images, both incredibly sensitive intelligence. And the report made its way from the National Center for Medical Intelligence in November to DIA, the Joint Staff, and the White House in December, to Trump in early January.

The report doesn’t actually push the time when Trump could be expected to know of this warning, it pushes the timeline back for others in the chain of command. But it does make it clear that people in that chain of command took it seriously enough to keep elevating it.

And then, Trump ignored it.

Yes, this is leaking to add to the political accountability on Trump’s refusal to listen. But it’s also a remarkably detailed report about the work of intelligence — the value that the Deep State brought to an issue that threatens to sink Trump’s presidency — that, partly because of his intellectual limits and partly because of his distrust of the “Deep State,” Trump ignored.

If this stuff can’t be shared via proper channels we may see more of it in the press in the coming months.

Update: On Twitter, Brian Beutler noted that George Stephanopoulos laid the groundwork for this story when hosting Mike Esper on Sunday.

STEPHANOPOULOS: You said at top of this interview that the Pentagon has been ahead of the curve every day, and you mentioned in January. But did the Pentagon receive an intelligence assessment on COVID in China last November from the National Center for Medical Intelligence of DIA?

ESPER: Oh, I can’t recall, George. But our — we have many people that watch this closely. We have the premier infectious disease research institute in America, within the United States Army. So, our people who work these issues directly watch this all the time.

So, you can see, we were weeks ahead of this in terms of preparing our own force and opening up our stockpile to the rest of the government.

STEPHANOPOULOS: But that’s in January, because, reportedly, this assessment was done in November, and it was briefed to the NSC in early December to assess the impact on military readiness, which, of course, would make it important to you, and the possible spread in the United States.

So, you would have known if there were briefed to the National Security Council in December, wouldn’t you?

ESPER: Yes, I’m not aware of that. I will tell you, again, our folks work this all the time. That’s why we have a global pandemic response plan that I initiated on February 1st. That’s why we have stockpiles of strategic supplies, whether it’s masks, gowns, PPE, ventilators, all those things we need.

Like All Else, Trump’s Inspector General Turnover Is about Pandemic Chuck Grassley and His Two Republican Friends