On Mountains, Mountain Climbing, and COVID-19 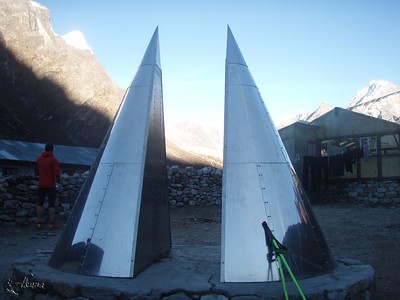 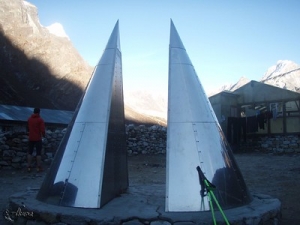 Memorial to climbers who have died on Mount Everest at the Pheriche Aid Post (h/t akunamatata via flikr; CC BY-ND 2.0)

The language of mountains and mountain climbing is all over the COVID-19 coverage, from the talk of “reaching the peak” of infections to the euphoria of those who proclaim that in various areas, we are “hitting the plateau.” But as a mountain-climbing friend once told me “Climbing the mountain is the easy part — it’s the descent that’ll kill you.”

This is not just a cliche, or a (non-)urban legend, but backed up by the experience of those who know the mountains best:

Kami Rita Sherpa knows Mount Everest better than anyone else: He’s summited the world’s tallest peak 24 times, more than any person in history. . . .

Sherpa said problems arise not from those lines [of climbers waiting at altitude to pass along single-file sections of the climb], but when people accidentally push past what their body can support. Some research suggests that Everest climbers can develop a kind of “summit fever,” racing to the top to prove they can, even when their bodies are showing signs of giving out.

“At that altitude, it takes everything to put one foot in front of the other,” Everest climber and exercise psychologist Shaunna Burke recently told Business Insider. “If you haven’t judged how much gas you have left in the tank, then you can’t make it down. That’s why some climbers sit down and don’t get back up.”

“When returning, their body is out of energy, and many people die due to this cause,” he said.

It’s not just one or two climbers’ opinion, either. In 2006, Paul Firth and his colleagues published “Mortality on Mount Everest, 1921-2006: descriptive study” in the British Medical Journal, which looked at every documented death on Mount Everest and sought to understand what commonalities might be found among the fatalities. They first distinguished between deaths below 8000 meters as climbers and their guides traversed areas prone to avalanches, crevasses, and other features of the mountain, and the deaths that took place above 8000 meters, where the mountain is generally more stable but fatigue and altitude sickness are the greatest dangers. On the lower part of the mountain, guides were more likely to be the ones who died, which the authors surmise is because the guides make multiple trips up and down the climbing route, setting ropes and bringing supplies up to the higher camp, before they guide the climbers along the route they found and made more safe. When it came to the deaths above 8000 meters, however, things reversed, and they noticed some shocking numbers:

Table 3 presents data on the mountaineers who died after reaching 8000 m. Fifty three (56%) died during the descent, 16 (17%) after turning back below the summit, and nine (10%) during the ascent. The stage of the summit bid was unknown for 12 mountaineers (13%), and four (5%) died before leaving the final camp.

Look at those top three figures again: 10% died while making the push for the summit, and 73% died while descending. For every death going up, there were 7 going down.

Maybe these climbers who died on the way back down pushed too hard going up, and had nothing left for the descent. Maybe they became disoriented because of lack of oxygen and quit thinking clearly. Maybe they were so excited at having made it to the top that they got sloppy as they turned around and headed down the mountain.

Whatever the cause, the study was clear: descending from the peak is more deadly that making the climb up. As our veteran climber cited above put it:

Burke said that although all climbers want to reach the summit, that objective alone can be a problematic.

“The summit is only halfway,” she said. “Your ultimate goal should be to make it back to camp alive.”

I look at the images of the folks protesting the “stay-at-home” orders issued to fight the COVID-19 epidemic, and their cheers of things like “We made it! We stopped the disease! Now let’s open things up again and get back to work!” I read the tweets to “liberate” this or that state, cheering on those who think the task is done. Then I think of the mountain climbers cheering at having reached the top of the mountain, who don’t realize how dangerous things can be on the way back down. That’s what worries me about all the talk of opening back up right now.

Yes, some places may have reached the peak of new infections, the peak of ICU bed usage, and the peak number of intubated patients. But here’s the thing: we are still on the mountain. Getting to the top is great, but the goal is to make it back to camp alive.

I don’t want to minimize the accomplishment of the climb, whether speaking of those who scale mountains or those who have been struggling to keep ahead of the increasing numbers of those hit by COVID-19. But relatively speaking, climbing the mountain is the easy part. It’s the descent that’s much more likely to kill. Face it, people: This journey has a long way to go, with plenty of opportunities for negligence and for misplaced cheering which will give life to a virus that deals out death.

This is no time for getting complacent or sloppy. Stay home, stay safe, save lives.