Arrrr Matey, There Be A New Bucco In The Bay 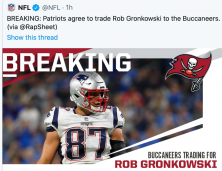 Marcy is penning all kinds of smart posts today, go read them. But as this is now a sports and music blog, I have an incredibly important update.

The Gronk is back! And he is going to join Tom Brady in Tampa Bay. 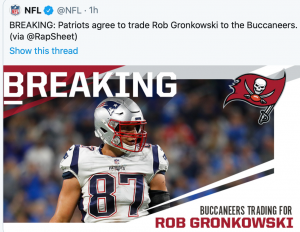 The Patriots have agreed to trade Rob Gronkowski to the Buccaneers, pending a physical, in a deal that reunites the retired tight end with Tom Brady in Tampa Bay.

Gronkowski’s agent Drew Rosenhaus confirmed Tuesday to ESPN’s Adam Schefter that his client was traded to the Buccaneers.

“Pending the physical, Rob has agreed to play for Tampa this season,” Rosenhaus told Schefter. “He will honor his current contract at this time.”‬

Gronkowski, who turns 31 next month, has one year and $9 million remaining on his current deal with the Patriots. New England will receive a fourth-round draft pick while the Buccaneers also receive a seventh-round pick in the trade, a source told Schefter.

Gronkowski already has taken his physical in Boston with a neutral physician, a source told Schefter, and is awaiting the official results. One source added to Schefter that he believes Gronkowski passed “with flying colors.”

Most Receiving TDs From Tom Brady

The 78 touchdowns Tom Brady and Rob Gronkowski connected on were the most in the NFL from 2010 to 2018. They are also twice as many as Brady has thrown to any other player.

Tampa Bay was the only place that Gronkowski was willing to play, a league source told Schefter. The Boston Herald first reported Tuesday that Gronkowski asked the Patriots to trade him to the Bucs.

This is exciting. At a time when there is no live sports news, this is huge. It would be huge even if there were not a lockdown on live sports. And, please keep in mind that the coach of the Bucs is Bruce Arians. Few here short of Scribe probably know exactly what that means. I do, because Arians was the gruff and engaging coach of the Cardinals for several years before his short lived retirement.

Arians lives by the motto of “No Risk It, No Biscuit”. In short, he believes in taking the top off and opening up the entire field. Neither Brady nor Gronk have ever had that, and they are made for it. TB12 will have a few more interceptions, and he and Gronk will have a hell of a lot of fun. The Buc’s wideouts, Mike Evans and Chris Godwin, were already seriously fantastic. Tampa did not even have to give up tight end OJ Howard (though, with Gronk on board, they likely will for even more help. Watch for it).

This is an absolute steal. Bill Bel needed the salary cap room desperately, but, still, this is a steal. A fourth rounder for as good of a tight end as ever played? And the Bucs get a seventh rounder thrown in too? Jeebus.

We have no idea if, when or how the NFL will return to play. But when they do, Tampa Bay is going to be seriously fun to watch.

The COVID Delay Should Give Reggie Walton First Pass at the Roger Stone Uns... Brian Kemp Suggests Workers at Nail Salons Don’t Own Their Own Lives