The Covid-19 pandemic demonstrates the class structure of the US. I’ve written several posts on the issue of class in the US, but most such analysis takes an index of some kind, wealth, education, income, and places people sequentially, then divides the line into groups which are called classes. For example, in this post I described Thomas Piketty’s classes based on wealth.

I discussed a modern Marxian class structure analysis here. Class is defined in terms of social and ownership relationships. Typically we think of three classes, the capitalists, the workers, and a small class of professionals and artisans who own their own means of production and work for themselves, but are to some extent dependent on the capitalist class. [1] This simple structure leads to difficult problems for people trying to use the analysis for social change.

1. In a large corporation, those at the bottom of the hierarchy own nothing but their labor and can only survive by selling that labor. They have little, if any, control over their working conditions. They are subject to the orders of those above them in the hierarchy. In higher levels of the hierarchy workers have limited control over the means of production, and have the power to control the actions of their subordinates. In even higher reaches, people achieve actual control over the means of production and control the actions of larger numbers of people. At the top are people who control the means of production through their power to direct their subordinates. In this more complex setting, the boundaries of class are blurred, and it is easy for people to misunderstand their position in the class structure.

It’s also difficult for people to understand that the problems they face in their jobs are common across all jobs. It isn’t just your boss who’s a jerk, your employer who has appalling policies on health care, sick leave, vacation and day-to-day irritations. Everyone faces those issues.

2. People don’t understand that capitalists exploit workers. This chart shows that the share of national income going to the labor sector has trended down since 1960. It dropped dramatically and stayed low during the last 20 years. That loss goes to the rich. I discuss the way in which capitalists justify this exploitation in this post. 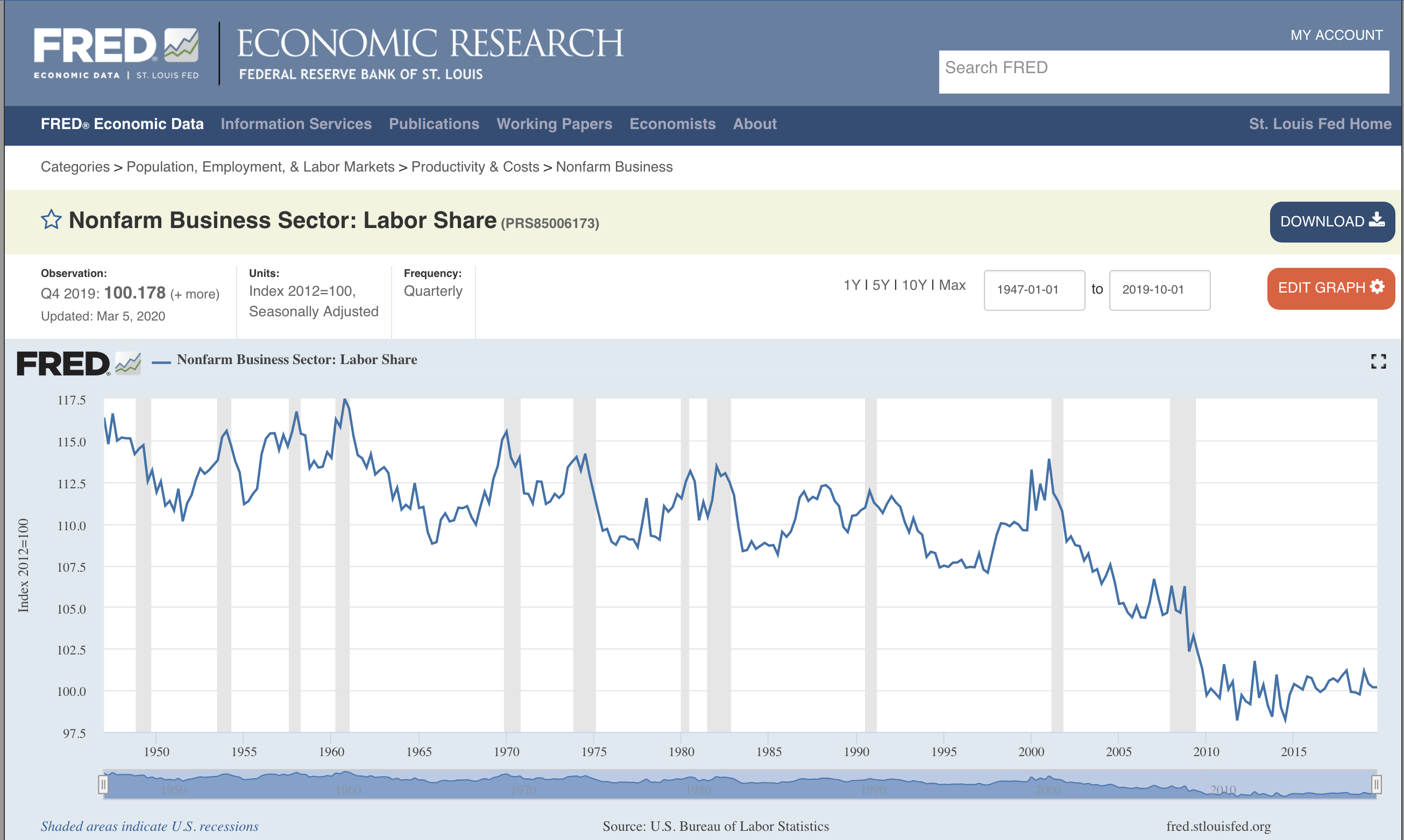 3. Most people do not understand how they are exploited operationally, because everything they experience seems natural. That’s because capitalists exercise substantial control over the public understanding of issues of political economy. Their version of business history dominates. Their theory of economics, neoliberalism, is not threatened by any widespread alternative. Their concept of the role of government has controlled since the 1950s. They have an out-sized input into our choices for political office in both legacy parties. They have used that power to hold onto and increase their power.

This pandemic has the potential to wake people up from their torpor. This article by Robert Reich is a good starting point. Reich identifies four classes defined in relation to the lockdown.

A. The Remotes: “…professional, managerial, and technical workers – an estimated 35% of the workforce” who are working and reasonably well-paid. They are largely unaffected by the lockdown.

B. The Essentials: the people who are required to go to their workplaces despite the lockdown, including health care workers, care-givers, farm workers, meat packers, grocery store and pharmacy employees, employees of gun stores and liquor stores.

C. The Unpaid: the non-essential workers who are now unemployed and subjected to lockdown, about 25% of the work force. Most of them lost their health insurance as well as their income, and face an unpleasant future.

D. The Forgotten: those “…for whom social distancing is nearly impossible because they’re packed tightly into places most Americans don’t see: prisons, jails for undocumented immigrants, camps for migrant farmworkers, Native American reservations, homeless shelters, and nursing homes.” The lockdown doesn’t affect them, as their lives sucked already.

Reich doesn’t mention the Fifth Class, those who are largely unaffected by the lockdown. This group has two segments. One is retirees and those near retirement, who presumably have the income and assets they need and to maintain their lifestyles. They have Medicare, stable housing, access to grocery stores and pharmacies, and generally can shelter in place with no discomfort. The second segment is people who have so much money they are not at all affected. They can just hop on their private jets and come and go as before, maybe with fewer people to serve them drinks.

The exploitation described in Point 2 is now in the open. The rich and their politicians value capital over the lives and well-being of the Essentials and the Unpaid. First, capitalists were heavily subsidized by the Fed and Congress, Second, politicians are granting the demands of the capitalists to reopen the economy and shield them from liability if they don’t protect their workers from deadly illness. Republicans force people to choose between working for the rich or protecting their health at the cost of their unemployment benefits and their life savings.

The domination of discourse raised in Point 3 has been eroded by the rise of the political rhetoric of Sanders, Warren, and others. A large number of working people of all incomes don’t accept the assertions of the rich and their media giants as gospel. They can see the impact of Covid-19 on themselves and everyone they know. They can read about the problems faced by other workers, and see that they are in the same position.

The practical outcome? Workers at a number of giant corporations are planning a work action for May Day.

“It’s more powerful when we come together,” Chris Smalls, a lead organizer of the May 1 walkout, who was fired from Amazon’s Staten Island fulfillment center after staging a walkout on March 31, told Motherboard. “We formed an alliance between a bunch of different companies because we all have one common goal which is to save the lives of workers and communities. Right now isn’t the time to open up the economy. Amazon is a breeding ground [for this virus] which is spreading right now through multiple facilities.”

The strikers are asking consumers to boycott Amazon, Whole Foods, Instacart, Walmart, FedEx, Target, and Shipt. They say that many of the workers will walk out, call in sick, or take other action. Their demands are astonishingly minimal: personal protective gear, paid sick leave, hazard pay, and a few company specific needs.

The Essentials and the Unpaid are forced to risk their health and their finances so the Remoters and the Fifth Class can live comfortably. That’s a concrete way of showing people their position in the class structure. Where are the politicians and media people capable of articulating this so everyone gets it?

====
[1] In this post, I use the term “capitalist” to mean the top .1% in wealth and the top managers of the largest businesses. It’s useful here where the basis of the analysis is more or less Marxist, but I’m ambivalent about it because I’m not particularly a Marxist. I’m just a guy who reads books. I usually use the term “filthy rich” which my mother loved, but it seems perjorative.