The frothy right is in full frenzy claiming that poor General Flynn, with his thirty years of intelligence experience, got naively caught in a perjury trap by FBI agents he regarded as his allies.

There’s a problem with that. Every single person claiming that Flynn was coerced to lie by the FBI — which necessarily concedes he did lie — is also accusing Flynn of perjuring himself in a recent sworn statement before Judge Emmet Sullivan. If what they say is true, then Flynn committed a crime in January, one for which the statute of limitations will extend until 2025.

Take this concession from right wing propagandist Jim Hanson, where he states that, “it seems clear he did lie.” 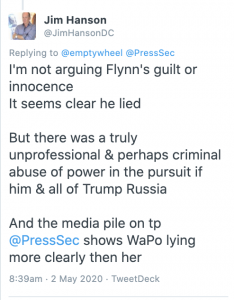 Hanson appears to excuse these lies because he doesn’t much care that, in the wake of an attack by a hostile foreign country, Flynn called up that country and told them it was no big deal, all while taking steps to hide that he had done so. That is, Hanson seems to excuse the lie because (in his mind, apparently) it is admirable for a man to work secretly with a country that has attacked America to help them avoid any repercussions for having done so.

Remember: Flynn told the FBI he thought an appropriate punishment for tampering with our elections would be a single Russian diplomat being sent home.

But once you’ve conceded that Flynn lied, you are accusing the General of perjury in a sworn filing submitted in January 29 which says,

I am innocent of this crime, and I request to withdraw my plea.

Flynn’s declaration is full of other details that are provably false — such as that he was extremely busy and only had a limited amount of time to give the FBI Agents who interviewed him. Flynn talked about hotels, ISIS, and Trump’s knack for interior decorating before turning to that interview; Peter Strzok even wondered how he had so much time to shoot the shit.

So when Flynn claims, in the declaration, to still not remember if he discussed sanctions with Kislyak or the UN vote with Israel, it’s not only not credible, but also refuted by other witness testimony, including KT McFarland’s own 302s and those of several top Trump aides, who told Mueller they recognized in real time that Flynn had lied.

Flynn technically maintains he did not lie (though that means his sworn plea allocutions were perjury, and he has never reneged on his sworn grand jury testimony admitting he knew while working for Ekim Alptekin that he was actually working for the Turkish government).

But if, like Hanson, you concede he did lie, if you believe the FBI did succeed in capturing Flynn in a “perjury” trap (actually, a false statements trap), then you, by definition, believe that his sworn statement from January is a lie — perjury, and perjury not coerced by any evil FBI Agents but instead coaxed by his pretty Fox News lawyer Sidney Powell.

It is a testament to how unmoored from any aspiration to truth that this entire campaign to excuse Mike Flynn’s coming pardon is that key propagandists participating in it don’t bother to familiarize themselves with the facts or the precarious net of sworn claims Flynn has made. There appears no concern, on the part of the propagandists, to ensure their stated views fit logically with Flynn’s sworn statements, to say nothing of adhering to the known facts or reality.

Ultimately, though, this debate is not about truth, because no one contests that Flynn got caught telling the hostile country that had just attacked us in 2016 not to worry about any retaliation, and Republicans are simply trying to find a way to minimize the political fallout in ensuring he pays no price for having done so. Ultimately, Billy Barr has rolled out four possible ways he can guarantee Flynn won’t do prison time, with varying degrees of political cost to Trump and blithely incurred damage for rule of law, and it is virtually assured that one of those ways will work.

But the willingness of those wailing “perjury trap” to concede that Flynn did lie introduces an interesting dynamic into these issues of power. That’s because Judge Emmet Sullivan, as recently as December, and possibly as recently as last week, showed some impatience with being dicked around like this (though he’s also increasingly impatient with Covington & Burling’s failures to provide Flynn all their records). And Sullivan has the ability to find that Flynn has lied to him, Emmet Sullivan, repeatedly, including in his declaration from January. Sullivan has the means to do so even if Barr orders Flynn’s prosecutors to withdraw their contest of his motion to withdraw.

It would raise the cost of a pardon if Trump had to do it after a judge were to find that Flynn continued to lie, in 2017 to Judge Contreras, in 2018 to Judge Sullivan, and again in 2020 to Judge Sullivan, all without the coercion of some baddy FBI Agents purportedly springing a trap on him. And yet that’s precisely the scenario that the perjury trap wailers make more likely.