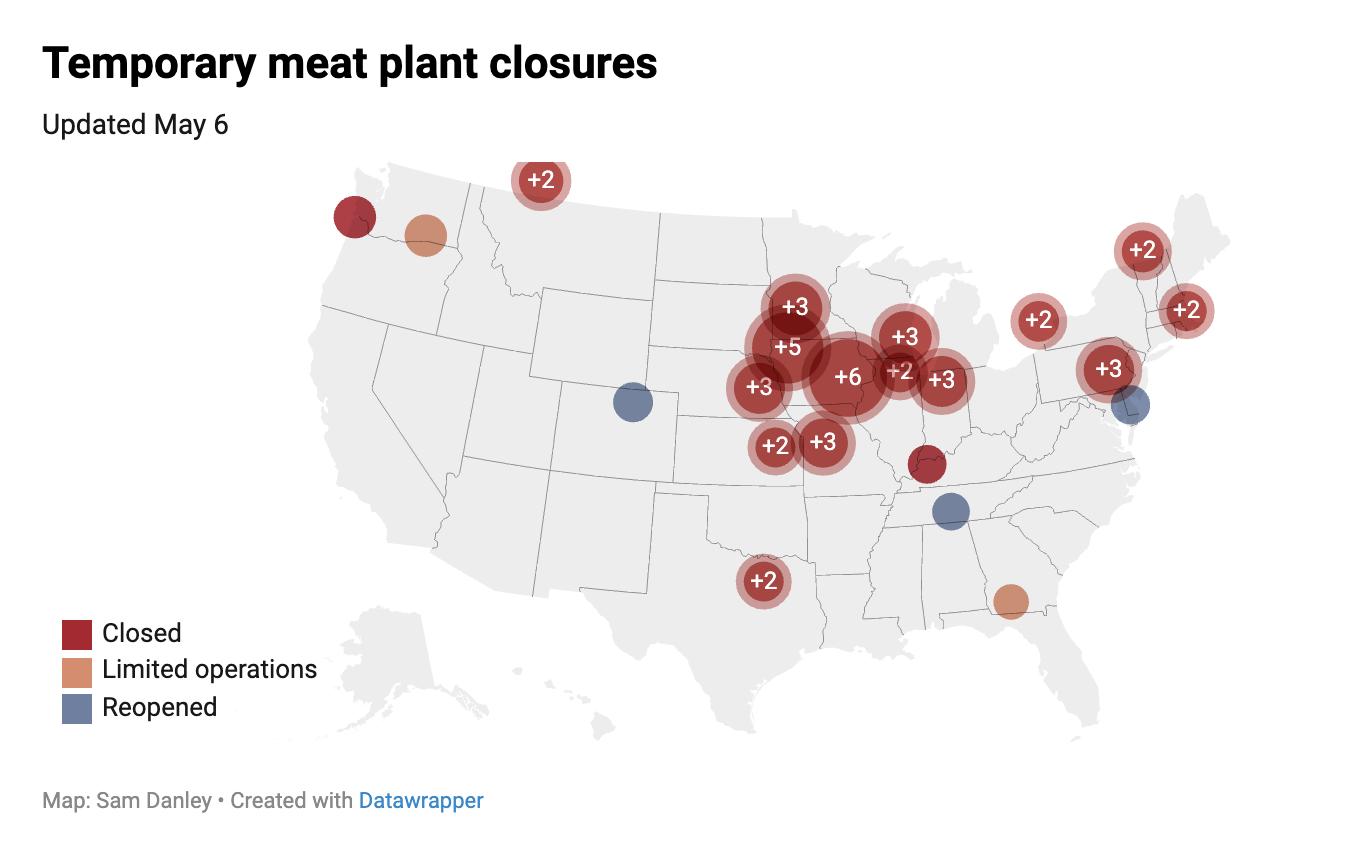 Over five weeks of a mostly-national shutdown, we never figured out how to protect essential workers.

During the period of the shutdown, outbreaks occurred throughout the meatpacking industry, leading to shutdowns in a number of factories. 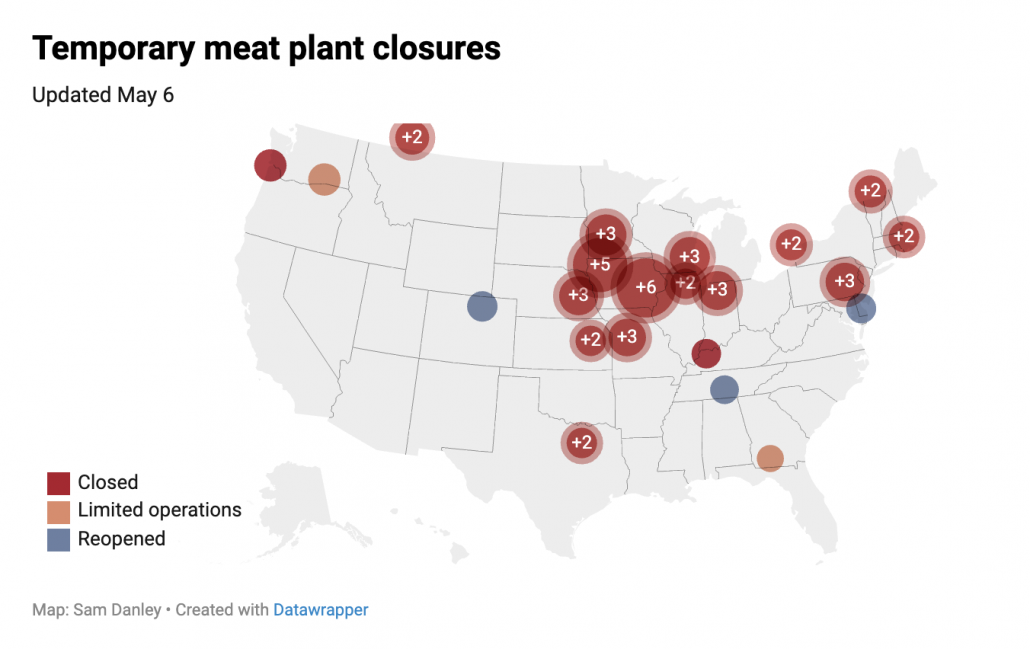 As a result, we’ve got meat shortages even as farmers have nowhere to sell their livestock. There were reports that a fifth of Wendy’s restaurants have run out of beef.

Stephens analyst James Rutherford said that a study of online menus for every Wendy’s location nationwide revealed that 1,043 restaurants — or 18% of its national footprint — have listed beef items as out of stock. More than 100 locations are still selling Wendy’s chili, which contains beef.

The shortages vary by state. Hundreds of Ohio, Michigan, Tennessee and New York restaurants are out of beef, while other states’ menus do not indicate any supply chain issues.

A Tectonix GEO analysis shows one reason why: people from one of the heavily affected areas traveled throughout the country. That suggests one possible way COVID has spread to a bunch of relatively remote factories was truckers serving the industry. I’ve heard inspectors also likely spread the virus between factories.

There were COVID clusters in a number of other professions that remained open during the shut-down: cops, prison guards, public transport workers, grocery store workers.

We never figured out how to protect these critical workers when it was relatively easy, when they and other essential workers made up most of the people on public transportation, when they were the only people relying on child care. That’s partly because we never managed to get the PPE and test and tracking systems in place to keep them safe.

And as a result, as the meat industry shows, our failure to protect critical workers has led to strains in a key part of our food supply chain, impacting consumers and suppliers up and down that supply chain.

Coronavirus has even threatened parts of our economy more directly responsible for keeping people alive. Before we shut down, for example, our Air Traffic Control was buckling, as the virus spread among workers in the close spaces of control towers.

If we were a sane nation, focused on the public good rather than bottom line dollars, we would have spent the five weeks of national shut-down figuring out how to protect critical workers and implementing those systems wherever workplaces had not shut down. We would have used that time to test the system and build up stocks of PPE and test kits needed to replicate the system in other, less essential work places. We would have perfected systems for keeping workers safe in the time of COVID, so we could learn how to do it while it was relatively easy, giving us something to replicate when the economy reopened.

We’re not a sane nation. We’re largely not focused on the public good.

And as a result, during the entire five weeks of the shutdown, we watched in fascination at what happens when you continue to work without implementing adequate measures to limit the spread of COVID without taking the obvious lessons from it. Again, we watched that happen at a time when it would have been easier to protect critical workers, because they were interacting with a limited number of other people. As the economy reopens, it will get harder to protect such workers, because there will be more people using public transportation and in grocery stores and relying on child care, increasing the likelihood that a single case can spread to more people, each potentially leading to the shut-down of an entire workplace three weeks later.

By failing to solve the problem of how you protect workers, those rushing to reopen the economy have set this country up for key failures in our rickety supply chain. Some of those failures will be nuisances, with factories idled because they’re missing a key part or shortages of non-essential items in stores. Some of the failures could lead to further health consequences. Some failures may happen in industries where workers are a lot harder to replace quickly. Those failures will make it harder for businesses that are open, as any outbreak will add to already inflated costs of operating, to say nothing of the blow to confidence such failures will bring.

It turns out, a lot of Republicans don’t understand how our economy works (though the same misunderstandings lay behind their opposition to bailing out the auto industry in 2008). They don’t understand that if critical parts of our fragile system break down, other parts begin to break down, potentially setting off a chain reaction.

And as a result, they’re rushing back to reopen the economy without first having done the basic things needed to operate businesses safely.

Yes, we need to take steps reopen the economy for the sake of the economy and our collective sanity. Which is why it was so important for the Federal government to put the pieces in place that would facilitate reopening the economy during the shut down. Only, the Trump Administration did not do that. It squandered the sacrifice made by the 33 million Americans who lost a job in that period. Now, not having put those pieces in place, the Trump Administration is pushing to reopen the world’s largest economy relying on little more than homemade masks to keep it running.