I wanted to point to some details from documents — the Sally Yates and Mary McCord 302s — submitted by DOJ yesterday in their bid to get out of the Mike Flynn prosecution. DOJ presumably submitted them for the way they show Jim Comey acting like Jim Comey, taking actions without approval from political leadership at DOJ in a failed attempt to politicize something. That he had done so was known, these 302s provide DOJ’s side of that story.

The 302s provide a bit more detail about how alarming the Mike Flynn transcripts were, though. For example, before McCord saw the transcripts, she assumed Flynn’s calls were simply an incoming Administration reaching out to foreign counterparts.

It seemed logical to her that there may be some communications between an incoming administration and their foreign partners, so the Logan Act seemed like a stretch to her. She described the matter as “concerning” but with no particular urgency. In early January, McCord did not think people were considering briefing the incoming administration. However, that changed when Vice President Michael Pence went on Face the Nation and said things McCord knew to be untrue. Also, as time went on, and then-White House spokesperson Sean Spicer made comments about Flynn’s actions she knew to be false, the urgency grew.

But when she actually read them, she realized they were worse than that. Specifically, she was surprised that Flynn had raised sanctions himself; the discussion didn’t come from Sergey Kislyak.

McCord did not recall exactly when she saw the transcripts of the Flynn calls, but believed she asked to see them after Pence’s statements about Flynn on Face the Nation. [Agent note: Pence was on Face the Nation on January 15, 2017.] McCord believed she probably had the transcripts by January 19, 2017, possibly having come over SIPRnet from Strzok. After reading them, she felt they were “worse” than she initially thought; she noted that her recollection of them is that Flynn proactively raised the issue of sanctions, and she feels it is hard to believe he would forget talking about something he raised himself.

When Yates talked to Don McGahn about it, she described that one of the problems with the calls but that Flynn made specific requests of Kislyak. Given these redactions, they must include stuff beyond the two issues that appear in Flynn’s own 302: the sanctions and the UN request. 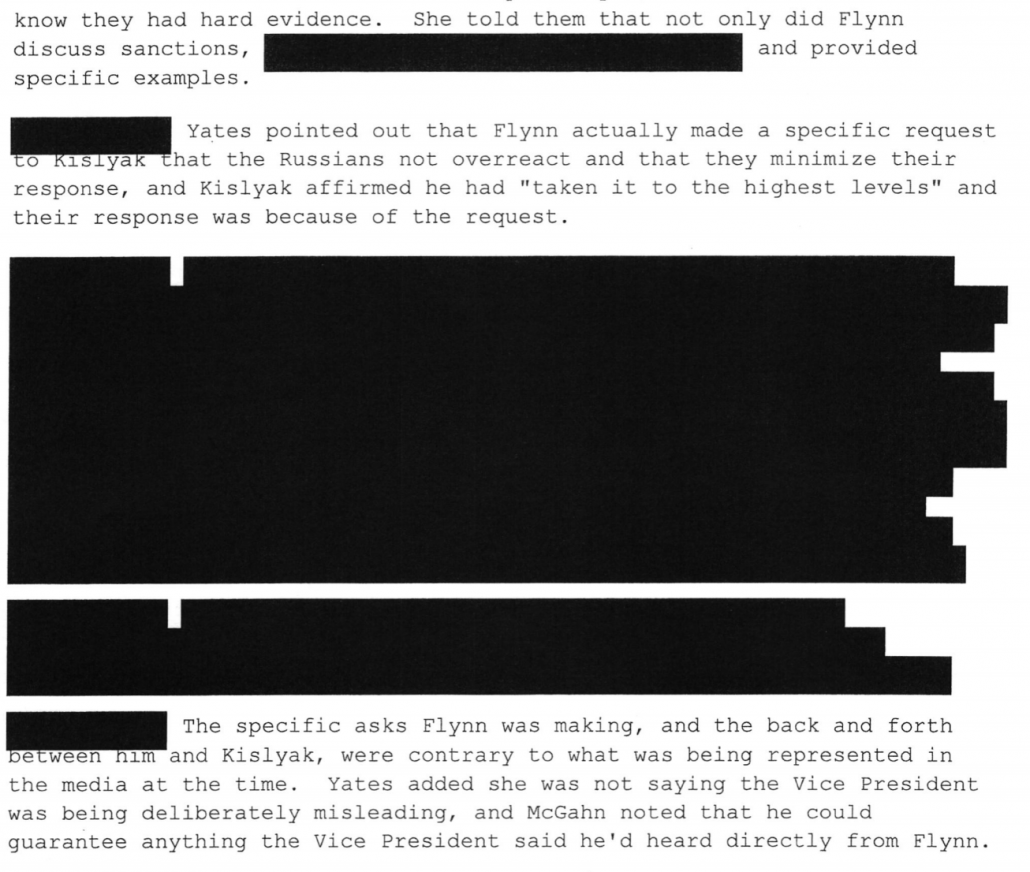 And it wasn’t just McCord who took this more seriously when she saw the transcripts themselves. Her 302 adds details (which were secondhand from McCabe) to this description from the Mueller Report:

Based on the evidence of Flynn’s contacts with Kislyak, McGahn and Priebus concluded that Flynn could not have forgotten the details of the discussions of sanctions and had instead been lying about what he discussed with Kislyak.202 Flynn had also told White House officials that the FB[ had told him that the FBI was closing out its investigation of him,203 but Eisenberg did not believe him.204

McCord describes how Pence went and got the transcripts from his Face the Nation appearance to compare with the Flynn transcripts. And Reince Priebus walked out of the room.

Pence, while reviewing, directed his Chief of Staff to get the transcript of his (Pence’s) Face the Nation interview, which he then compared to [redacted] transcripts. At one point in the meeting, Priebus said he’d seen enough and left the room.

And there are two more details about the White House response of interest. McCord specifically said, “Neither McGahn or Burnham gave any indication they had talked to anyone about the information.” She described that they had seemed “dumbstruck” by the news the previously day. But the following day, according to Yates, there was a very different tone to the meeting.

The second meeting was a distinct “tenor change” from the first. While the first meeting didn’t feel adversarial, McGahn started the second meeting with something like, “What’s it to DOJ if one White House official lies to another?” Yates was a little taken aback by that and explained again the same reasons for their concern that she had the day before. She told McGahn that there was more to this than one official lying to another, and Flynn’s actions themselves were problematic, especially when followed by lies and the public getting a false statement.

Of course, McGahn had talked to other people about the warning. He had spoken with Trump.

Finally, the day after Yates and McCord spoke to Don McGahn about it the second time, John Eisenberg emailed McCord using Flynn’s phone.

On January 28, 2017, McCord received an email from Flynn’s email account, but signed by John Eisenberg, Deputy Counsel for the President for National Security Affairs. The email stated it was a follow-up to McCord’s interactions with McGahn, and asked for a time to have a secure call. Given that the email was from Flynn’s email account, McCord opted not to reply to the email directly.

While the phone confusion is easily explained — Flynn’s office would be a SCIF, so phones would be left outside — the claim they shared passwords is inconceivable.

And, of course, it makes it clear that once Eisenberg got involved, he (the same guy who hid Trump’s Ukraine transcript) started working directly with Flynn on the pushback.