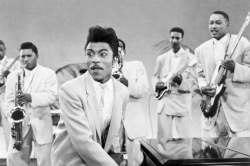 Things come, and they go. And we all do sooner or later. Today, Little Richard passed. I once heard (no, I have no idea where) Keith Richards say, and I am paraphrasing only slightly, “Chuck Berry wrote all the rock and roll songs”. Paraphrasing or not, that is about right. But he should have included Little Richard.

And now Richard Wayne Penniman is gone, There have been rock performers as big, sure. But few as seminal and important as Little Richard. He was, and stands, for everything rock became in his and Chuck Berry’s forever wake.

“In 2004 Little Richard wrote a profile of himself for our Immortals issue. He explained why he was so dangerous at the time — because was the first black artist whose records the white kids were starting to buy”

Yes, along with Chuck, that is exactly right. So, a little bit of Tutti Fruity for the weekend.

On another sad note, I was lazy and did not put up a thing last weekend. But our Roving Reporter Rosalind wanted to acknowledge a friend. And we shall do so now. The Covid deaths are real, and they hit home to one and all. So, a few words from Rosalind:

“While we are surrounded by sadness at the growing number of people losing their lives to Covid-19, we mourn also the everyday deaths that take away friends and family. Today I honor my longtime neighbor, Sam Lloyd, the hilarious character actor best known as the lawyer “Ted” on Scrubs. We had side-by-side parking spots at our Hollywood apartment building and caught up with each other regularly heading in and out. Beyond being one of the nicest and funniest human beings, he possessed a gorgeous singing voice, featured regularly with his four-part harmony group “The Blanks” on Scrubs. The tributes to Sam on twitter from all around the world show how far his comedic and musical powers reached. We are so fortunate to have a world of re-runs to keep us smiling, and his memory alive.

Such is where we are at today. The world is going crazy and you wonder if anybody gives a damn anymore. Here, we do. Thank you for doing so along with us. There will, of course, be others. But Little Richard was special. RIP.

The Logan Act Is Just the Cherry on Mike Flynn’s Foreign Agent Sundae All COVID-19 is Local, BBQ edition