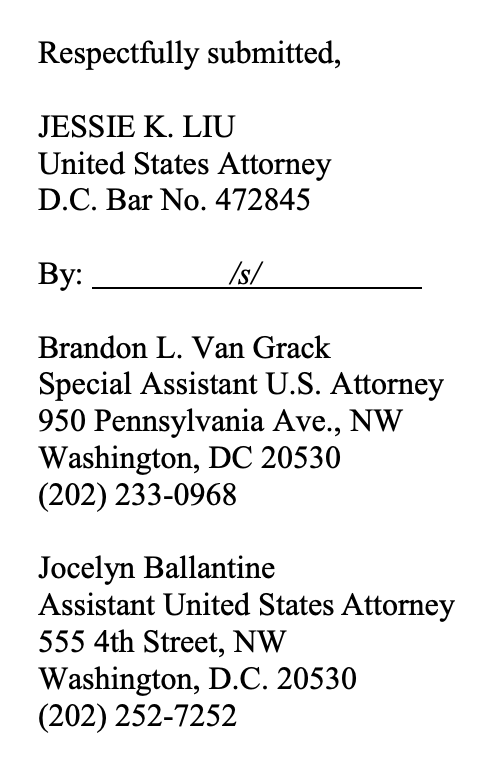 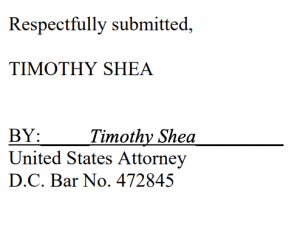 … as a filing Bill Barr’s DOJ submitted under the same bar number on November 1, 2019. 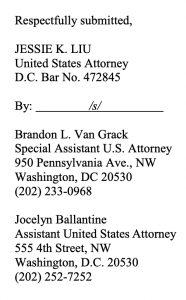 That filing, submitted under the supervision of a Senate-confirmed US Attorney, responded to a half-assed motion to dismiss that Flynn’s lawyers had slipped into a Brady motion. As such, it refuted Flynn’s argument that his prosecution should be dismissed for the same reasons that DOJ adopted last week.

The motion, submitted by Bill Barr’s DOJ, noted that Mike Flynn knew all the things he had invoked last fall in arguing to dismiss his case — including claims he was ambushed in his January 24, 2017 interview — when he pled guilty for a second time on December 18, 2018 and admitted he could never again complain about the circumstances of his interview.

Although the defendant now complains about the pace of that discovery, before December 18, 2018, the defendant was in possession of all of the information on which he now bases his argument that the case should be dismissed due to government misconduct. See Reply at 1-2, 16, 26; Notice of Discovery Correspondence, United States v. Flynn, 17-cr-232 (D.D.C. Oct. 1, 2019) (Doc. 123). Thereafter, on December 18, 2018, the defendant and his counsel affirmed for this Court that they had no concerns that potential Brady material or other relevant material had not been provided to the defendant.

For all of the above reasons, it is no surprise that with the same set of facts, the defendant and his prior counsel previously represented to this Court that the circumstances of the interview had no impact on his guilt, or guilty plea. On December 18, 2018, when the Court asked the defendant if he wished to “challenge the circumstances on which you were interviewed by the FBI,” he responded, under oath, “No, Your Honor.” 12/18/2018 Hearing Tr. at 8.10 The Court then asked the defendant if he understood that “by maintaining your guilty plea and continuing with sentencing, you will give up your right forever to challenge the circumstances under which you were interviewed,” to which the defendant answered, “Yes, Your Honor.” Id. And when the Court queried whether the defendant wanted an opportunity to withdraw his plea because one of the interviewing agents had been investigated for misconduct, the defendant stated “I do not, Your Honor.” Id. at 9. His counsel likewise represented to the Court that their client was not “entrapped by the FBI,” and that they did not contend “any misconduct by a member of the FBI raises any degree of doubt that Mr. Flynn intentionally lied to the FBI.” Id. at 11-12.

That motion, submitted by Bill Barr’s DOJ, argued the circumstances of the January 24, 2017 interview were proper. The filing specifically stated that the FBI was engaged in a legitimate investigation. It stated that “agents were not in search of a crime” and specifically denied trying to trap Flynn in a lie.

Nor did law enforcement officials engage in “outrageous” conduct during the criminal investigation and prosecution of the defendant. On January 24, 2017, when the defendant lied in his interview, the FBI was engaged in a legitimate and significant investigation into whether individuals associated with the campaign of then-candidate Donald J. Trump were coordinating with the Russian government in its activities to interfere with the 2016 presidential election. The defendant was not “ambushed” at the interview, and the interviewing agents certainly did not engage in “outrageous” conduct that undermines the fact that he lied. Reply at 1, 7. The documents produced by the government in discovery show that the FBI asked the defendant for permission to conduct the interview, informed the defendant that the questions would concern his “contacts with the Russian Ambassador to the United States,” interviewed the defendant in his own office, and afforded him multiple opportunities to correct his false statements by revisiting key questions. See, e.g., Memorandum of Andrew McCabe dated January 24, 2017 (Doc. 56-1) (“McCabe Memo”); Strzok 302. Tellingly, the defendant supports his allegation by selectively quoting from documents. For example, the Reply states that, according to the Strzok 302, the agents decided they would not confront the defendant if he did not confirm his statements. See Reply at 8. But the Reply omits the sentence in the Strzok 302 preceding that reference, where DAD Strzok explained that “if Flynn said he did not remember something they knew he said, they would use the exact words Flynn used . . . to try to refresh his recollection.” Reply, Ex. 6 (emphasis added).

Bill Barr Did Not Provide the Most Important Exhibit to His Mike Flynn Dismissal... Mike Flynn Collaborator Barbara Ledeen’s Past Role in Producing “New”...