As Richard Burr Rushes to Release Volume Five of SSCI’s Russian Investigation, the FBI Closes In 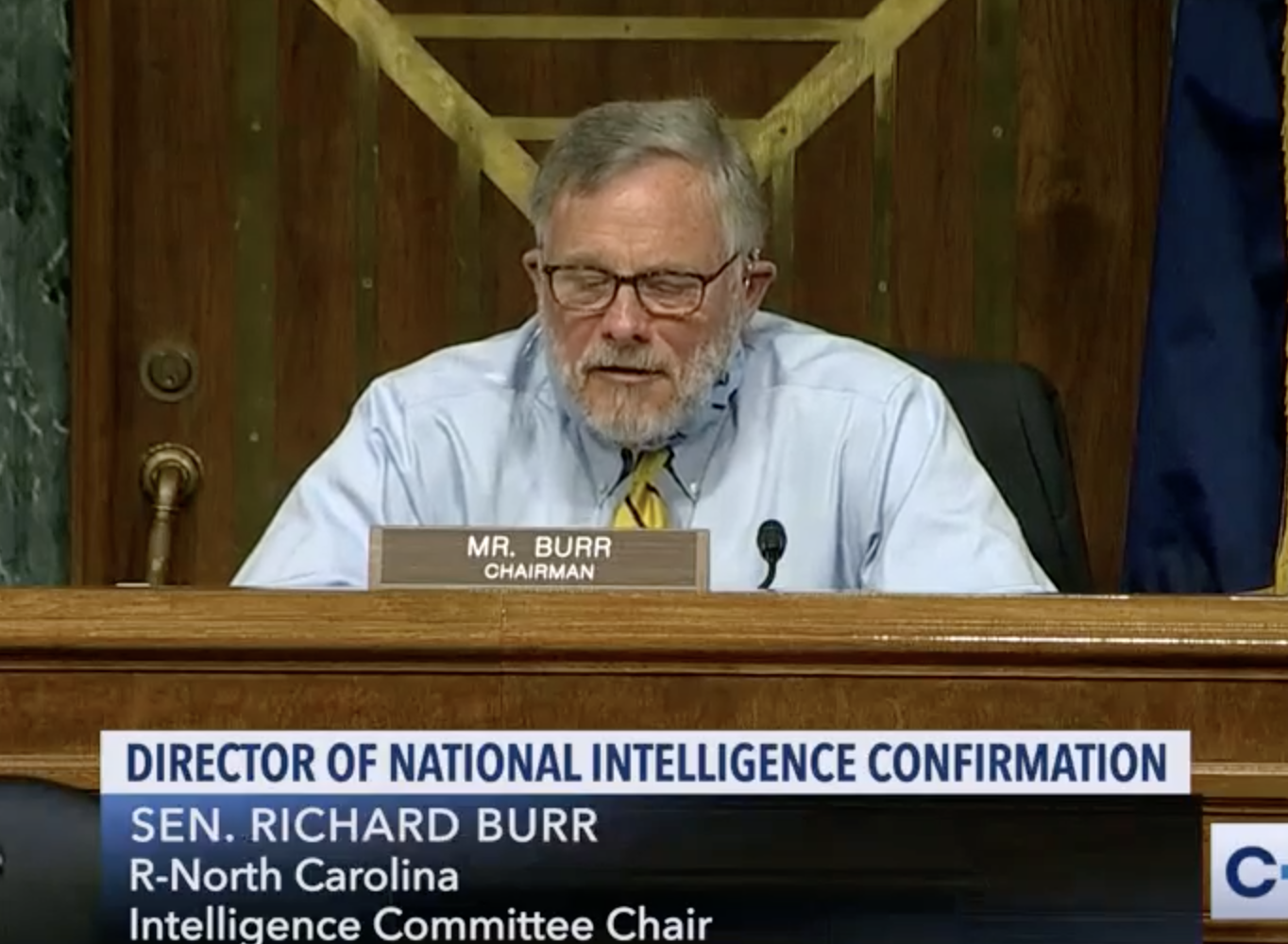 Update: As I was posting this, reports that Burr is stepping down as Chair of SSCI came out.

The LAT has a big scoop revealing that the FBI seized Richard Burr’s cell phone yesterday, having gotten a probable cause warrant incorporating information they obtained via a search of his iCloud.

Federal agents seized a cellphone belonging to a prominent Republican senator on Wednesday night as part of the Justice Department’s investigation into controversial stock trades he made as the novel coronavirus first struck the U.S., a law enforcement official said.

Such a warrant being served on a sitting U.S. senator would require approval from the highest ranks of the Justice Department and is a step that would not be taken lightly. Kerri Kupec, a Justice Department spokeswoman, declined to comment.

A second law enforcement official said FBI agents served a warrant in recent days on Apple to obtain information from Burr’s iCloud account and said agents used data obtained from the California-based company as part of the evidence used to obtain the warrant for the senator’s phone.

The same day Burr sold his stocks, Burr’s brother-in-law, Gerald Fauth, sold between $97,000 and $280,000 worth of six stocks, according to documents filed with the Office of Government Ethics. Fauth serves on the National Mediation Board, which provides mediation for labor disputes in the aviation and rail industries.

Burr has denied coordinating trading with his brother-in-law.

Given the progression from an iCloud warrant to the warrant for the cell phone, it’s likely the FBI is seeking out texts between Burr and his brother-in-law around the time of the stock sales. (The FBI often access iCloud to find out what apps someone has accessed, obtains a pen register to identify communications of interest using that app, then seizes the phone to get those encrypted communications.)

The public evidence again Burr is quite damning, so there’s no question that this is a properly predicated investigation.

Still, coming from a DOJ that has gone to great lengths to protect other looting (and has not taken similar public steps against Kelly Loeffler), the move does raise questions.

Particularly given the focus that Richard Burr gave, during the John Ratcliffe confirmation hearing, to getting the final volume of the SSCI Report on 2016 declassified and released by August.

Richard Burr: Congressman, over the course of the last three years this committee has issued four reports about Russia’s meddling in our elections covering Russia’s intrusions into state election systems, their use of social media to attempt to influence the election, and. most recently confirming the findings of the 2017 Intelligence Community Assessment. While being mindful of the fact that we’re, um, in an unclassified setting, what are your views on Russia’s meddling in our elections?

John Ratcliffe: Chairman, my views are that Russia meddled or interfered with Active Measures in 2016, they interfered in 2018, they will attempt to do so in 2018 [sic]. They have a goal of sowing discord, and they have been successful in sowing discord. Fortunately, based on the work–the good work of this committee, we know that they may have been successful in that regard but they have not been successful in changing votes or the outcome of any election. The Intelligence Community, as you know, plays a vital role on insuring we have safe, secure, and credible elections and that every vote cast by every American is done so properly and counted properly.

Burr: Will you commit to bringing information about threats to the election infrastructure and about foreign governments’ efforts to influence to Congress so we’re fully and currently informed?

Burr; Will you commit to testify at this committee’s annual worldwide threats hearing?

Mark Warner: Thank you Mr. Chairman. You actually took some of my questions.

Burr: My eyesight is good.

Warner: Mr. Ratcliffe, good to see you again and I appreciated our time, um, um, last Friday. I want to follow-up on a couple of the Chairman’s questions first. As we discussed, we’re … Volume Five, and so far our first four volumes have all been unanimous. Or maybe with the exception of one dissenting vote. If we get this document to the ODNI we need your commitment not only that we do it expeditiously, but as much as possible to get that Volume Five reviewed, redacted, and released, ideally before the August, the August recess. Now, I know you’ve not seen the report yet. All I would ask is, aspirationally that you commit to that goal, because I think as we discussed, to have a document that could be [big pause] potentially significant come out in the midst of a presidential campaign isn’t good or fair on either side. So if I could clarify a bit, recognizing that you’ve not seen the document is a thousand pages, that you’d try to get this cleared prior to August.

Ratcliffe: Vice Chairman, I would again, commit that I would work with you to get that as expeditiously as possible.

During the 2018 election, Burr had — at a time when the committee assuredly did not have the ability to rule it out — twice said there was no evidence of “collusion.” Burr has made no such claims recently.

Even just the Roger Stone disclosures from his trial make it clear “collusion” happened, and that’s ignoring the ongoing Foreign Agent investigation involving Stone. And the Intelligence Committees have been briefed on the existence of — and possibly some details about — either that or other ongoing investigations.

If Richard Burr is prepping to reverse his prior public comments about “collusion,” it might explain why the Bill Barr DOJ, which has stopped hiding that it is an instrument used to enforce political loyalty to Trump, would more aggressively investigate Burr than others.

tweets from our circle
bmaz@bmazRT @doug_ramsdell: Amen. too much glass, too much concrete for bullets to ricochet off. only way the opinion would be worse is if they nati…1 hour ago23 May 2022
bmaz@bmazHere is Adam Schefter, star "reporter" for @espn once again unabashedly shilling for a gambling business. What a li… twitter.com/i/web/status/1…1 hour ago23 May 2022
bmaz@bmazCowboy Chuck rides in. This is hilarious: twitter.com/awfulannouncin…1 hour ago23 May 2022
emptywheel@emptywheelThis sounds like a job for Mike Flynn. twitter.com/pbump/status/1…3 hours ago22 May 2022
RayneToday@raynetodayLOL Perhaps the mythical "single server" the right-wing wanted turned over after the DNC was hacked already resides… twitter.com/i/web/status/1…8 hours ago22 May 2022
Ed Walker 🍞🌹💉💉@MasaccioEWRT @espinsegall: Good morning. So Ginny Thomas was paid for many years to lobby against the ACA while Clarence Thomas on several occasions…12 hours ago22 May 2022
Ed Walker 🍞🌹💉💉@MasaccioEWRT @Artemesia44: We have a SC that is almost entirely right wing Catholic and is trying to impose its Opus Dei, handmaiden cult views on th…13 hours ago22 May 2022
Jim White@JimWhiteGNVWe feast tonight! The butts cooked faster than expected., but will hold safely wrapped in foil and in a cooler unti… twitter.com/i/web/status/1…1 day ago21 May 2022
RayneToday@raynetodayRT @darth: i know this is completely unrelated but imagine spending nine fuckin hours with that guy2 days ago21 May 2022
Jim White@JimWhiteGNVWho’s ready for baseball at the end of the rainbow? pic.twitter.com/QWJZZK5LpC2 days ago20 May 2022
Jim White@JimWhiteGNVMore than fifty folks from the church are signed up to eat pulled pork in my back yard tomorrow evening. Fortunatel… twitter.com/i/web/status/1…2 days ago20 May 2022
RayneToday@raynetodayRT @wyatt_privilege: Not a mind blowing observation but the game now is to send crazy shit upstairs to scotus and invite them to remold, sc…4 days ago19 May 2022
RayneToday@raynetoday~ding-ding-ding~ Accurate. twitter.com/robinmarty/sta…4 days ago18 May 2022