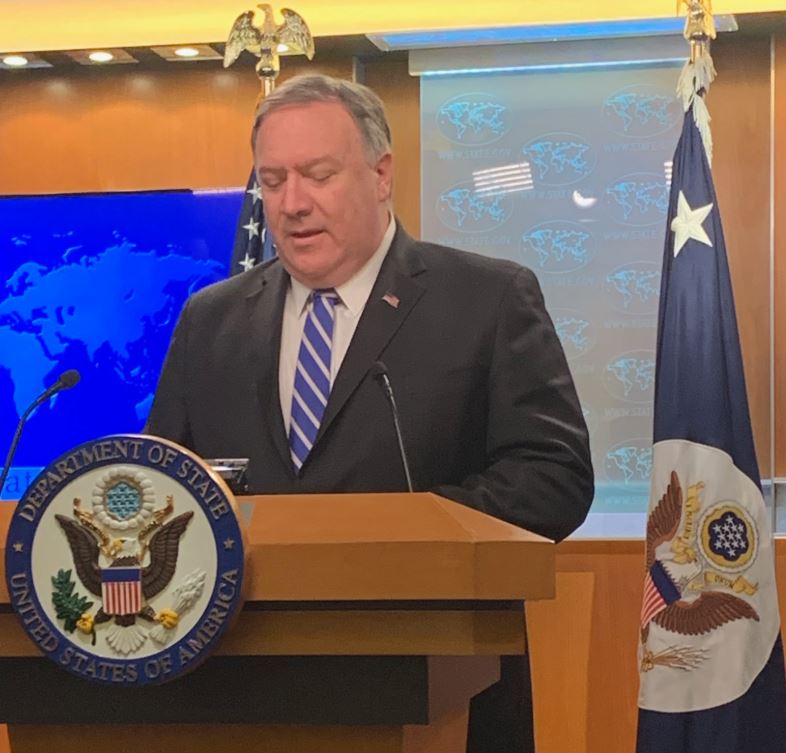 Recall that back on April 30, I wrote about how the Trump Administration had been orchestrating a propaganda push to claim that SARS CoV-2 was accidentally released from the Wuhan Institute of Virology. Of special importance is that the New York Times article I cited on the topic specifically mentioned Mike Pompeo as one of the primary forces behind pushing the story. Recall also that a part of this propaganda effort came from “leaked” State Department cables.

Apparently, getting called out by the New York Times was not enough to deter Pompeo from this effort. He returned to the airwaves on May 3, telling ABC that there is “enormous evidence” that the virus came from the lab. And then “magically”, but in reality following the aluminum tubes playbook straight out of Cheney’s Iraq WMD playbook, a “report” came into the hands of NBC, who published it May 8. The report purportedly relied on “open source” data to make the case that some sort of accident occurred at the lab in late October, prompting officials to shut down the lab and block roads surrounding it. NBC debunked one aspect of the report in their story, noting that a conference at the lab that the report claims was cancelled in this timeframe actually took place as planned.

Yesterday, Erin Banco and colleagues at Daily Beast published what can only be described as one of the most epic slap-downs of fake intelligence I’ve ever seen. Please go read the piece in full, because summarizing cannot properly capture its full glory.

The dissection of the false intelligence in the report begins with work done by Jeffrey Lewis (one of the best follows on Twitter at @ArmsControlWonk), who utterly destroyed the report’s claims regarding satellite data:

What’s more, imagery collected by DigitalGlobe’s Maxar Technologies satellites and provided to The Daily Beast reveals a simpler, less exotic reason for why analysts believed “roadblocks” went into place around the lab after the supposed accident: road construction. The Maxar images also show typical workdays, with normal traffic patterns around the lab, after the supposedly cataclysmic event.

“This is an illustrated guide on how not to do open source analysis,” said Jeffrey Lewis, director of the East Asia Nonproliferation Program at the Center for Nonproliferation Studies, who analyzed the MACE report for The Daily Beast. “It is filled with apples-to-oranges comparisons, motivated reasoning, and a complete refusal to consider mundane explanations or place the data in any sort of context.”

That’s right. The report took images showing roads blocked for ordinary road construction and claimed they showed that a catastrophic accident in the lab meant that traffic had to be kept away to prevent exposure to the leaked virus.

But the fun doesn’t stop there. I’ll get to who MACE, who prepared the report, is a bit later. The story continues:

MACE’s analysts tried to establish a “pattern of life” at the Wuhan lab in order to reveal what they claim is an anomaly, one purportedly caused by a leak. The MACE document charts the movement of apparent Wuhan lab personnel into and out of the facility leading up to October, when the alleged leak took place. In one slide, analysts wrote that there is an “18 day gap” in which “there were no observable events” from devices at the lab between Oct. 6 and 24, supposedly suggesting an accidental leak.

In doing so, they appear to have been unaware of a key cultural factor complicating the normal course of events: a holiday. “The first week of October is a golden week in China, which is going to disrupt that pattern,” Lewis said.

Yep. The “anomaly” MACE ascribes to leak was in fact an ordinary holiday when activity would be diminished around the lab for a perfectly ordinary reason.

And the Daily Beast investigators spread the fun around, getting the folks at Bellingcat involved in investigating the claims made in the report:

The Daily Beast asked analysts at the award-winning open source investigative news outlet Bellingcat to review the MACE dossier and evaluate the quality of its conclusions. Within minutes of receiving the dossier, Bellingcat senior investigator Nick Waters disproved one of the MACE document’s claims: that a conference on biosafety lab management at the Wuhan lab scheduled for the first week of November was canceled.

But the conference did take place, as NBC first reported. Waters found a Facebook post from a Pakistani scientist who had attended the event and taken selfies there, including at the BSL-3 laboratory.

Wow. And Waters doesn’t stop there:

He also took a dig at one of the many amateurish elements in the MACE presentation. “Perhaps the authors should have spent more time testing their analysis rather than working out how to crop the eye of Sauron into a logo copy-pasted from the internet,” Waters said.

Okay, I got a huge laugh at the eye of Sauron bit. That’s because I’ve run into the folks behind MACE before. As Daily Beast points out, MACE stands for Multi Agency Collaboration Environment. And according to this link they provide, MACE is hosted at a company in Las Vegas by the name of Sierra Nevada Corporation. Way back in 2011, I wrote about a technology called Gorgon Stare, developed by Sierra Nevada Corporation, that claimed to enable real time remote viewing analysis of entire villages in Iraq or Afghanistan from imaging equipment carried by high-flying drones. Of course, this technology turned out to be a very expensive boondoggle that did nothing to help intelligence-gathering. I can’t help wondering if the eye of Sauron bit was an insider joke at Sierra Nevada that Waters understood and shot right back at them to ridicule this report and the old Gorgon Stare technology.

So, while the MACE report clearly originated in the US, what I haven’t seen yet is a clear indication of just when it surfaced, especially when it surfaced for senior Trump Administration officials and the intelligence community. It would not surprise me if it goes all the way back to the propaganda campaign in mid-April I described in my previous post. The version of the report that NBC published has the last several pages redacted with the description that this was done to protect names from being disclosed. That really makes me wonder if the specific question from John Roberts of Fox News to Trump on April 14 about an intern at the lab being infected and then spreading it to her boyfriend and the wet market was based on the redacted portion of the MACE report. All we know about timing is that the report had made its way to Congressional committees by May 8 when NBC published it.

There is another weak intelligence document, though, that this time is traced directly to the State Department. On May 7, the Sydney Morning Herald debunked a “dossier” that had been leaked from the US embassy in Canberra that the Daily Telegraph (a Rupert Murdoch paper in Australia) wrote about on May 2. The Herald says this about Australian officials  looking for the basis of the dossier:

Senior members of the Morrison government and Australian intelligence agencies at first had trouble finding the document. Eventually they found a research report, based on publicly available information including news reports, which appeared to fit the description. The research paper contained no information that was generated from intelligence gathering, according to people who have read it.

Labor MP Anthony Byrne, the deputy chair of the influential intelligence and security committee, was “incensed” by the report of the dossier. Mr Byrne, one of Parliament’s biggest supporters of the US alliance, directly raised his concerns with senior members of the Morrison government and intelligence agencies, saying Australia shouldn’t accept intelligence that doesn’t exist and fall for a “tricked-up document”.

There are now widespread suspicions within senior ranks of the Australian government and the intelligence community that the document was leaked to The Daily Telegraph by a staff member in the US embassy in Canberra. This suspicion, whether true or not, underlines how the positions between sections of Canberra and Washington national security circles have diverged over the claim. Some senior officials clearly believe the US embassy is pushing a narrative in the Australian media that could be counter to the beliefs and interests of its hosts.

The episode highlights the danger of mischaracterising the work of intelligence agencies. Some of the footnotes in the document contained references to US media reports that were based on unsubstantiated assertions from the US government – the same kind of circular intelligence which resulted in the “children overboard” affair in 2001.

Wow. The Herald also goes there, comparing this propaganda ploy to an Australian false information scandal of similar magnitude to the Iraq WMD operation in the US.

But again, Pompeo and those under him seem to be central to this whole operation. The Daily Telegraph story appeared just a day before Pompeo claimed “huge evidence” and likely was based on a document leaked by a US embassy. And then NBC published the MACE document a few days later. I haven’t seen anyone suggest that the document in Australia is the MACE document, but the Herald’s description and debunking of it sure would fit with them being the same or at least having the same source.

Given Pompeo’s central role in spreading propaganda that has been so easily refuted, I can’t help wondering if we will have another shoe drop on the firing of Steve Linick. Note that in his letter to Congress on the firing (which will be complete at the end of a 30 day clock starting Friday night), Trump said it was based on Pompeo’s suggestion that Linick be fired. Also note that we were first told it was because Linick was investigating Pompeo using State Department personnel to run personal errands. Today, that’s been expanded to cover the fast-tracking of arms sales to Saudi Arabia. But in their article on that, CNN notes:

But at this time, House Democrats say they do not yet know which investigation was the biggest factor behind the decision to dismiss Linick.

Democrats on both the House Foreign Affairs and Senate Foreign Relations committees are interested in learning more about Linick’s investigations into Pompeo, and Engel emphasized the importance of cooperation from the administration in his statement Monday.

“The administration should comply with the probe I launched with Senator Menendez and turn over all the records requested from the Department by Friday,” he said, a reference to Sen. Bob Menendez of New Jersey, the ranking Democrat on the Senate Foreign Relations Committee.

I find it hard to believe that Pompeo would have felt truly threatened by either the investigation into using aides for personal errands or expediting the Saudi arms sales. Those just seem like garden variety Trump corruption that gets shrugged off as the next daily outrage appears. However, if Linick had started nosing around the leak of the State Department’s own Wuhan cables and/or the allegation of the leak of the report from the Canberra embassy, I think Pompeo would see a bigger danger. That would represent an investigation into an ongoing propaganda operation in which Pompeo disseminated easily disproved disinformation.

The final beautiful irony here is that if Linick had started such an investigation, it likely was based on open source information. Unlike the MACE information though, this open source information would consist of Pompeo’s own recorded media appearances and the subsequent public debunking of the propaganda. That propaganda getting debunked would be both Pompeo’s direct statements and the debunking of the “supporting” material that appears to have been released either by him or those doing his bidding.