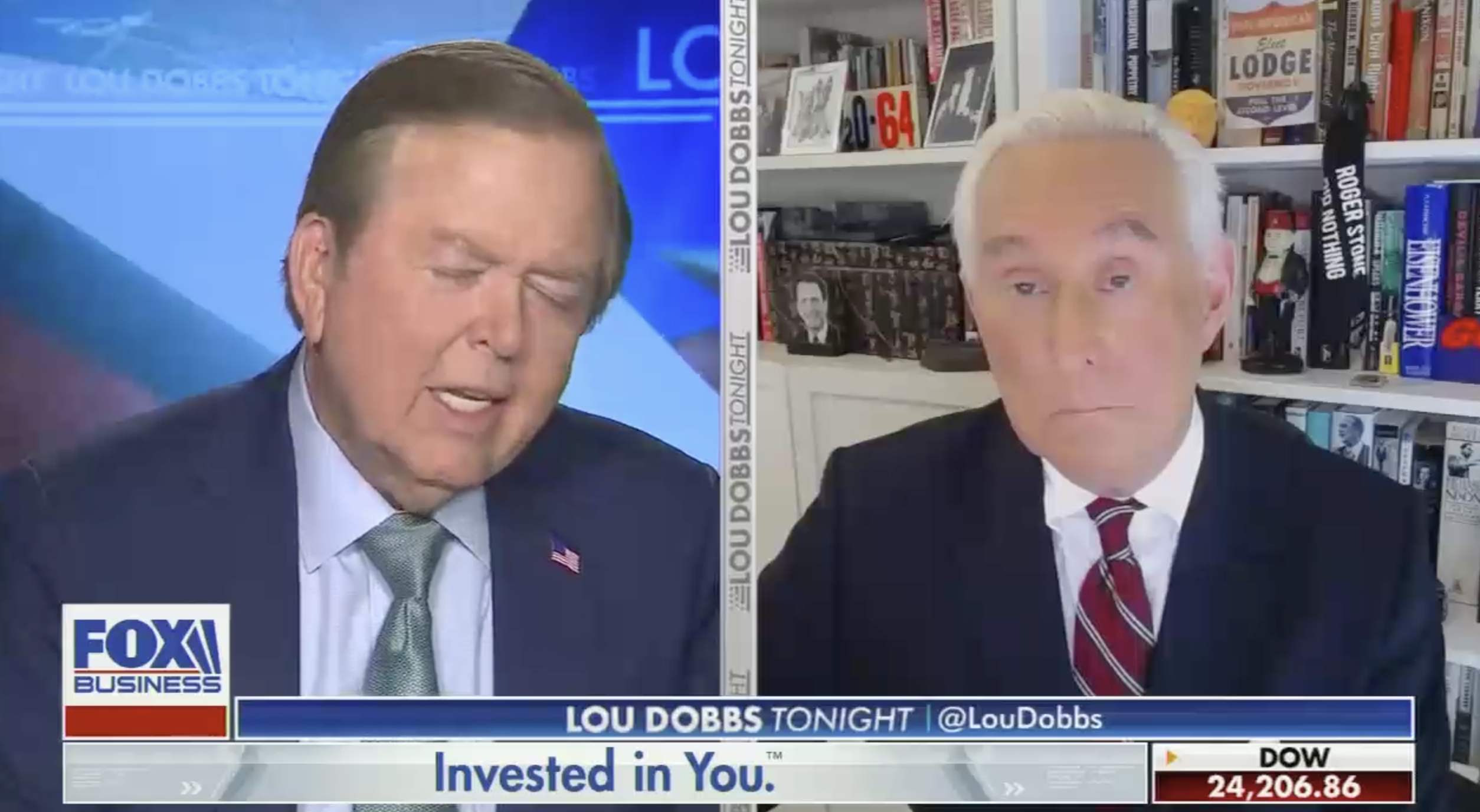 Just weeks before Roger Stone is scheduled to report to prison, he has opened a new bid for a pardon: by claiming he refused to implicate Trump in his efforts to optimize the WikiLeaks releases during the election.

Stone started the campaign last week in an unbelievably solicitous interview with the Daily Caller (which apparently isn’t upset by the recently released evidence Stone used them to spread false stories in 2018), and continued it last night on Lou Dobbs.

In both, Stone makes an entirely new claim about how he protected Donald Trump. He claims that an unnamed prosecutor on his case approached his lawyers suggesting that Stone would get no jail time if he described how he coordinated with Trump on WikiLeaks and Russia during 36 (or 29, in the Daily Caller version) phone calls prosecutors had identified.

DOBBS: We’re back with Roger Stone. And Roger, do you think you were targeted by Mueller, specifically to get dirt — to put you under pressure to get dirt on President Trump? STONE: There’s no question whatsoever. After illegal leaks over a year saying I would be charged with treason and conspiracy against the United States, being the link between the Trump campaign and Russia. They indicted me on the flimsiest charges of lying to Congress even though there was no underlying crime for me to lie about. And then on July 24th, 2019, a member of the Mueller’s dirty cop squad approached one of my lawyers proposing a deal. If Stone would be willing to really re-remember the content of some 36 phone calls I had with candidate Trump, and admit that they were about Russia and WikiLeaks, they would be willing to perhaps recommend no jail time and I said, no. This President needs to be reelected, Lou. He is the greatest President in my lifetime, I would never give false testimony against him.

Stone doesn’t admit — and of course Lou Dobbs doesn’t challenge him — that the public record shows a Foreign Agent and conspiracy investigation into Stone appears to be ongoing. There weren’t really any leaks (at least not from the government) claiming the investigation into Stone pertained to conspiring with Russia, but it does appear to be the case that prosecutors were and may still be focusing on conspiracy charges for Stone.

Rather than discuss what the public record shows, Dobbs allows Stone to float a number of other false claims, along with this new one: that he was asked and refused to implicate Trump.

Stone’s segment had the desired effect.

The thing is, if I were Trump, I wouldn’t take any moves to protect his rat-fucker based on these statements — and not just because the record has shown Stone to be lying non-stop since 2016. It’s true that this purported offer came not long after DC prosecutors had made it clear in a status report for Rick Gates that Trump’s awareness of Stone’s actions would be a focus of Stone’s trial. It is true the offer came days before the first of a series of interviews seemingly preparing for Stone’s trial (which started November 5, 2019).

But this request also would have come after prosecutors had had six months to wade through the materials seized when they arrested Stone on January 25, 2019. Among the things prosecutors were explicitly searching for was a notebook in which a rat-fucker taught by Nixon’s experts wrote down everything that transpired in conversations Stone had with the candidate.

53. On May 8, 2018, a law enforcement interview of [redacted] was conducted. [redacted] was an employee of Stone’s from approximately June 2016 through approximately December 2016 and resided in Stone’s previous New York apartment for a period of time. [redacted] provided information technology support for Stone, but was not f0rmally trained to do so. [redacted] was aware that Stone communicated with Trump during the 2016 presidential campaign, and afterward, both in person and by telephone. [redated] provided information about a meeting at Trump Tower between Trump and Stone during the time [redacted] worked for him, to which Sterne carried a “file booklet” with him. Stone told [redacted] the file booklet was important and that no one should touch it. [redacted] also said Stone maintained the file booklet in his closet.

I actually had come to suspect that, in the weeks after Matt Whitaker first got briefed on this investigation, Stone managed to pawn off the notebook onto one of his aides. That’s because, among the documents Stone submitted in an attempt to pretend that he and his lawyers weren’t yanking Amy Berman Jackson’s chain about their knowledge of the release of the paperback edition of his book recounting the 2016 election, was one showing that after Stone flip-flopped on a dime about his interest to even do the paperback, he wanted immediate payment to his collaborators on the book on December 18, 2018.

Stone’s book was effectively the “post mortem of what went wrong” that Stone kept the notes for. If Stone had learned (in part via the private investigator he had hired for this purpose and possibly via Whitaker) that prosecutors knew of and where interested in this notebook, paying someone to protect the notebook would be the kind of thing Stone might do.

But his claims about protecting Trump include specific numbers of calls. Stone is inconsistent about how many calls prosecutors were asking Stone about. In one place he said 29, another 36.

Both of those numbers are considerably less than 60, which is the number of phone calls prosecutors said Stone had directly with Trump, even before any calls Stone may have placed through Trump’s assistants or the face-to-face meetings (for example, one on October 8, 2016) we know happened, even without a phone call to arrange it. 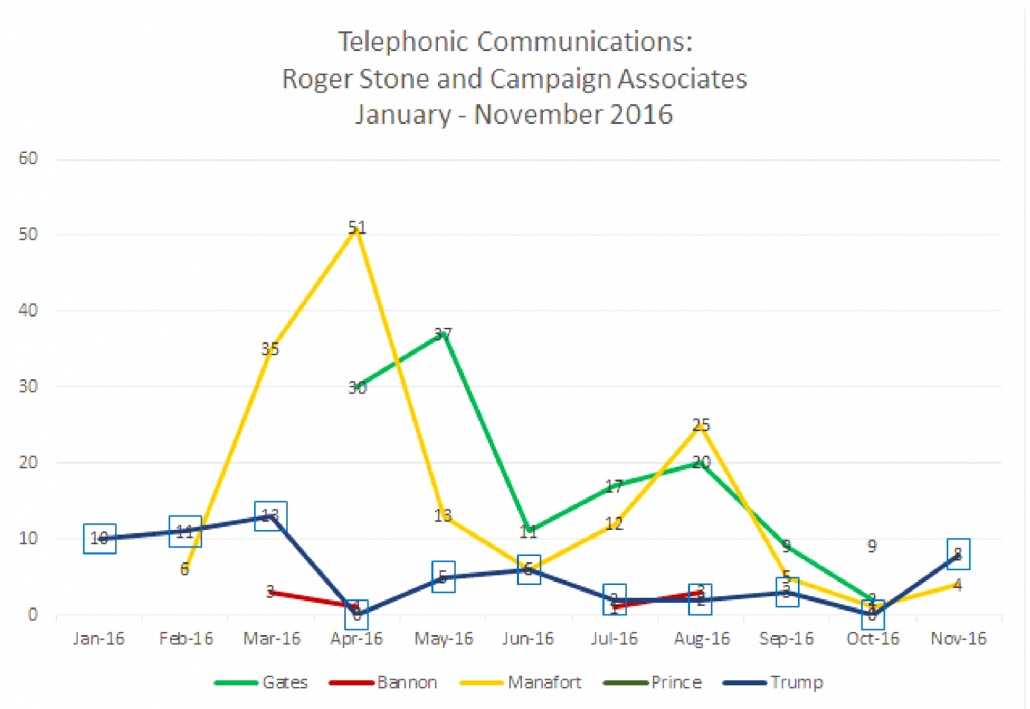 It’s true that, at the trial, prosecutors assiduously disclaimed specific knowledge of the content of those calls.

But if they have reason to believe that just a subset of those calls — around half — pertained to WikiLeaks and Russia, it might explain why they’d approach Stone with that number. (Of course, Stone might simply be making the number up and prosecutors might have focused on these calls because of the context, as with multiple calls that preceded or followed calls to Gates that involved WikiLeaks.)

Plus, prosecutors came to the trial prepared to lay out how extensive these communications were, among other things, but seemed to change strategy in the second week of the trial (after interviewing some unnamed witness on that Saturday).

It may well be that Roger Stone decided not to implicate Trump when prosecutors asked him to in July 2019 and he may be boasting of that now in a bid to stay out of prison (which was a long time ago, in any case). But somehow, prosecutors seem to have known which of more than 60 calls to ask about. If they learned it from a CYA document Stone carelessly kept around, prosecutors may not need Stone’s testimony to implicate Trump in optimizing the WikiLeaks releases, making a pardon for Stone less than useless for Trump.