This table lists all the known investigations pertaining to the Russian investigation, save those into people involved in the Carter Page FISA applications. All have at least a component touching on the investigation into Mike Flynn. 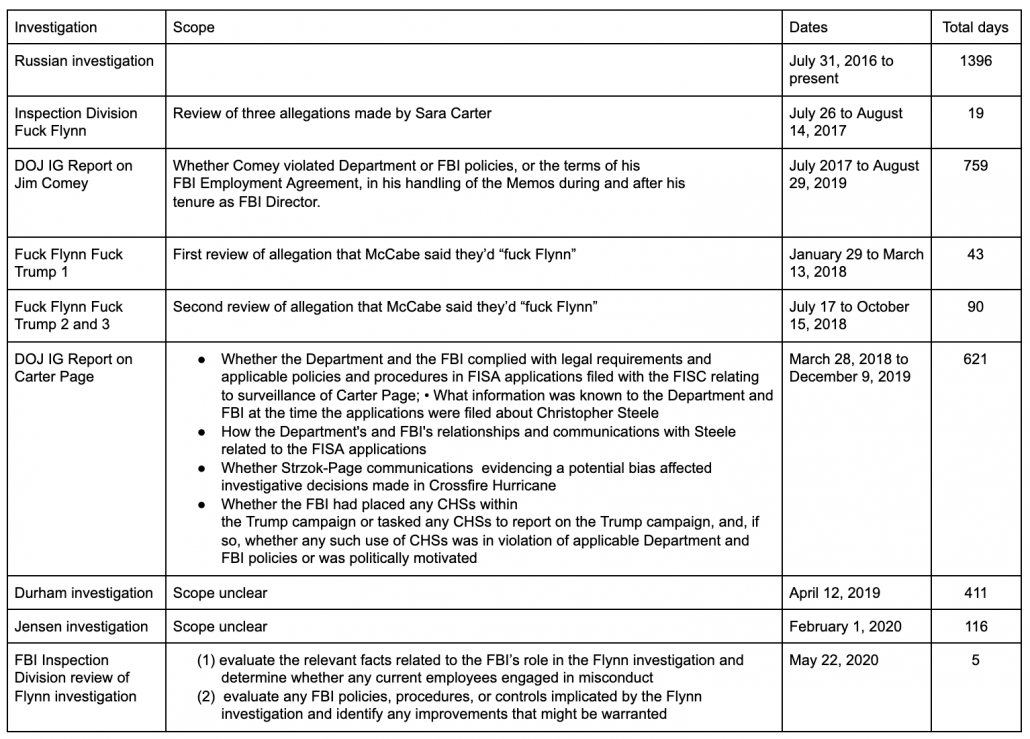 This table assumes the Russian investigation is ongoing, based off the redactions in the Roger Stone warrant releases and FOIAed 302s, even though Mueller closed up shop a year ago.

Mike Flynn kept raising the “Fuck Flynn” allegations with prosecutors, leading the government to review the allegations two more times, including an October 25, 2018 interview with Lisa Page where she was also asked about her role in editing the Flynn 302s.

Nevertheless, on July 17, 2018, the defense revived the same allegations. This time, the defense claimed that the source was a staff member of the House Permanent Select Committee on Intelligence (“HPSCI”). The HPSCI staff member allegedly told the defendant that the second interviewing agent had told the staff member that after a debrief from the interviewing agents, Deputy Director McCabe said, “F**k Flynn.” Once again, the government reviewed information and conducted interviews, and once again confirmed that the allegations were completely false. And after defendant and his counsel raised the accusation for a third time, on October 15, 2018, the government responded by producing interview reports that directly contradicted the false allegations. Despite possessing all of this information, defense counsel has again resurrected the false allegations, now for a fourth time

The DOJ IG investigation into whether Jim Comey violated policy or the law by bringing home his CYA memos started in July 2017 and continued through last summer. Obviously, one of those memos recorded Trump asking Comey to let the Flynn investigation go.

The after-action review will complement the already substantial assistance the FBI has been providing to U.S. Attorney Jeff Jensen in connection with his work on the Flynn case.  Under Director Wray’s leadership, the FBI has been fully transparent and cooperative with Mr. Jensen, and the FBI’s help has included providing special agents to assist Mr. Jensen in the fact-finding process.  Although the FBI does not have the prosecutorial authority to bring a criminal case, the Inspection Division can and will evaluate whether any current on-board employees engaged in actions that might warrant disciplinary measures.  As for former employees, the FBI does not have the ability to take any disciplinary action.

Director Wray authorized this additional level of review now that the Department of Justice, through Mr. Jensen’s work, has developed sufficient information to determine how to proceed in the Flynn case.  However, Mr. Jensen’s work will continue to take priority, and the Director has further ordered the Inspection Division to coordinate closely with Mr. Jensen and ensure that the review does not interfere with or impede his efforts.  Relatedly, for purposes of ensuring investigative continuity across these related matters, the Inspection Division will also utilize to the extent practicable the special agents that the FBI previously assigned to assist Mr. Jensen.

In Bill Barr’s interview with Catherine Herridge, he discussed the Jensen review in terms of criminal behavior, which would mean Jensen and Durham are both considering criminal charges for some of the same activities — activities that had been investigated six times already.

Based on the evidence that you have seen, did senior FBI officials conspire to throw out the national security adviser?

Well, as I said, this is a particular episode. And it has some troubling features to it, as we’ve discussed. But I think, you know, that’s a question that really has to wait an analysis of all the different episodes that occurred through the summer of 2016 and the first several months of President Trump’s administration.

What are the consequences for these individuals?

Well, you know, I don’t wanna, you know, we’re in the middle of looking at all of this. John Durham’s investigation, and U.S. Attorney Jensen, I’m gonna ask him to do some more work on different items as well. And I’m gonna wait till all the evidence is, and I get their recommendations as to what they found and how serious it is.

But if, you know, if we were to find wrongdoing, in the sense of any criminal act, you know, obviously we would, we would follow through on that. But, again, you know, just because something may even stink to high heaven and be, you know, appear everyone to be bad we still have to apply the right standard and be convinced that there’s a violation of a criminal statute. And that we can prove it beyond a reasonable doubt. The same standard applies to everybody.

This is one reason why DOJ’s claim to have found “new” information justifying their flip-flop on Flynn’s prosecution would be so absurd if DOJ weren’t making the claim (with no documentation) in court. Different entities in DOJ had already investigated circumstances surrounding the Flynn investigation at least seven times before Jensen came in and did it again.

But I guess Barr is going to keep investigating until someone comes up with the result he demands.

Is COVID-19 Why Florida Has About 1300 More Pneumonia Deaths This Season Than... Ric Grenell Confesses He Was Worse than Samantha Power at the UN