The Fog of Protest

“We could wrap this up right now,” a police officer said over the scanner traffic that I was listening to as I walked along Mission Street in San Francisco. It was late on the night of June 3rd, and I had joined a protest group walking south on Valencia Street in San Francisco’s Mission District. The group was loud and a little rowdy, but not destructive. 30-something people trailed down to 20-something people — counts are always a little abstract in a group like this. We made a couple turns and walked back north, along Mission. “We could wrap this up…” the officer had said, and then the radio chatter moved smoothly onto the tactical part. 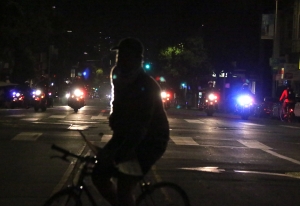 Motorcycle police trailing the protest through the Mission.

I was listening to the police scanner while walking with the group. When I do this, I often notice a disconnect between the police and the people on the ground, and sometimes between the police and the police on the ground. In this case, there was some panicky talk of the protestors building a barricade and setting it on fire after we turned onto Mission Street. I spun around to figure out what I’d missed. This didn’t seem like that kind of protest. Loud and rude for sure, we were hours after curfew and this was the proud hood crowd more than the carefully-stenciled-signs-of-unity crowd. But, not violent, and not even vandalous. From looking over the street behind me, I couldn’t see what the police were talking about. I did spot a newly-emptied trashcan on the sidewalk, but not in the street. No one was near it, much less ready to set fire to the mess. I’m not a fan of littering, but I’ve watched people build burning barricades across streets, mostly in France, and this wasn’t that. This was someone kicking the trash over.

The reason for kettling and arresting this group given by an officer on the scanner was the curfew violation. It was late, and there were “about 25” of us, an officer said over the radio. It gave me a sense that the police were done and wanted to leave. “We could wrap this up right now…” and they laid out a plan to bring in officers on both sides, close in, and arrest everyone. I ducked onto a side street and circled around to different sides of the area now blocked off by police, and tried to take pictures of the arrests. (I did not get many, Julian Mark of Mission Local got the best images while being detained.) 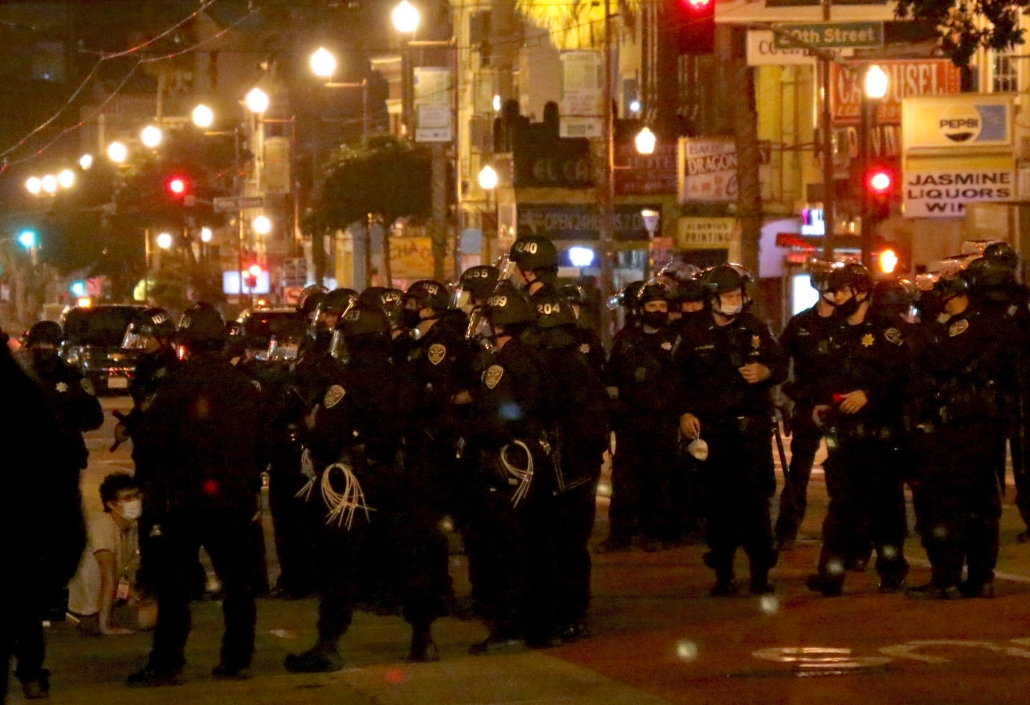 Some of the police and one arrestee.

These three things, curfew, the hour, and something about fire, became conflated later into a nebulous story about lighter fluid, when the cops were tired of following 25ish shouty people cussing at them, but not doing much else. 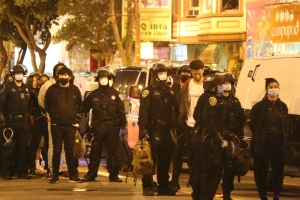 Police and arrestees line up for a police wagon.

None of this was extraordinary. Whatever problems are inherent to a protest situation, they are deeply compounded by police forces, and, to a lesser degree, protestors, all being very sure about what the other side is doing and thinking without having much real knowledge or insight.

I’m willing to say after more than a decade of doing this work that those arrests took place because the police were tired and wanted to go back to the station or home. But to get there, they really had to work up some other reason, whether they were aware of it or not. Police are mere humans, and subject to mere human follies. Protestors are too, but everyone knows that. Protestors look like a mess, even when they’re not. The police are the ones who dress alike and larp¹ being Perfectly Coordinated Machines of Order, instead of tired humans who just need to pee, damnit. This underlying humanity is scant comfort for those being arrested, maybe even less so for the one protestor that night who was taken away in an ambulance. When you’re supposed to be the perfect passionless embodiment of state violence, but you’re just a petty and tired as anyone, you can end up being a right bastard without knowing how, or that, you got there. This is what lies behind the sentiment ACAB: All Cops Are Bastards. It’s not a personal statement; it’s just what happens when role play gets out of hand, and in our society, the role play is always out of hand.

The other human bias police often suffer from in these chaotic scenes is that vigilance for the extraordinary generally leads humans to perceiving extraordinary things, whether they are there or not. Back on June 1st, when San Francisco was just getting started on its larger and more raucous protests, I was tracking people around the SOMA District (South of Market, a major dividing street in the city) protesting police violence. Scanner chatter was high, and the largest group was at the base of the Salesforce Tower, the tallest (and newest) building on the San Francisco skyline. There was talk of crowbars and vandalism, and the back-and-forth was working itself up into urgency. I started to run towards the tower, a few blocks away, because I know where this kind of talk usually leads. But another officer got on the radio. He was on the scene, and things were fine. “This is a peaceful protest,” he said repeatedly. “Don’t antagonize them.” He talked the chatter down. 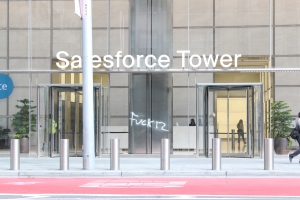 “Fuck 12” (12 means police) in spray paint was the only evidence of the protests. I’m sure it’s been cleaned up by now.

I stopped running, which I appreciated, and made my way over towards the building more slowly, taking some pictures along the way. The chatter became tense a few more times, but the original officer kept talking them down. “They’re peaceful,” he said repeatedly, and something like, “We have them,” as in he and the other officers on the scene were able to handle it. Another officer said there was vandalism, and the original officer said “Very minor” and again, “Don’t antagonize them!” He expressed the tension of someone who was talking his friends out of doing something stupid, which as it turns out, he was. In the end the Salesforce Tower was fine, and undoubtedly better than it would have been if the police had clashed with thousands of protestors at its front door. Cooler heads prevailed.

We who attend or cover protests have a saying which we often don’t say aloud because of the accusation of bias: “It ain’t a riot ’til the riot cops get there.” This isn’t universal, but it’s more common than most people think, including the police. Even well-meaning cops are in a system where they’re looking for something to do violence on, and looking for things hard enough makes humans tend to see what they’re looking for. It’s hard to understand what’s happening in a mass of angry people, but it’s violence much less often than you’d think.

I have seen actual riots that are riots from their very first moments, torrents of anger and grief that become a violent backlash on the physicality of society itself. But I’ve never seen a protest get much beyond turning over trashcans and spray painting things without police provocation. But that form of escalation is so baked-in to the dance of police and protestors now, I can’t imagine police can see it the way I do. The police look for trouble, they invariably find (and create) it, therefore they know there’s always trouble to look for.

Sometimes cooler heads prevail, sometimes there’s proportional responses, or no responses, and the crowd moves on without much damage, or the people drift off and go home tired at the end of a long day of exercising their First Amendment. On those occasions, protestors are often praised as peaceful, but not by me. I expect most protestors (except maybe the French) to be largely peaceful by default.

Instead, I’ve come to praise the cops more over the years, though it’s damning with faint praise. I praise them for not crashing hard into a crowd because a kid got out a can of spray paint. I praise them for just letting people walk it out late into the night, until everyone gets to go home and sleep. I praise them for not jumping at shadows and petty slights, for not getting frightened in the fog of protest and turning violent. Good cop, don’t hit anyone.

Honestly, the fog of war effect and confirmation bias are not just police problems, they’re human problems. They are the mistakes Homo Sapiens always make, and everyone including me, and you, would likely have the same errors of perception if we were suddenly part of a police force. As long as the police and people are other from each other, human biases towards the other will defeat our unity and progress.

The most heartening thing I’ve seen is police who took a knee, Kaepernick-style, against police violence. But I don’t believe police violence can be meaningfully curbed until the police are no longer a separate force from their communities, both sides lost in fogs of human bias.