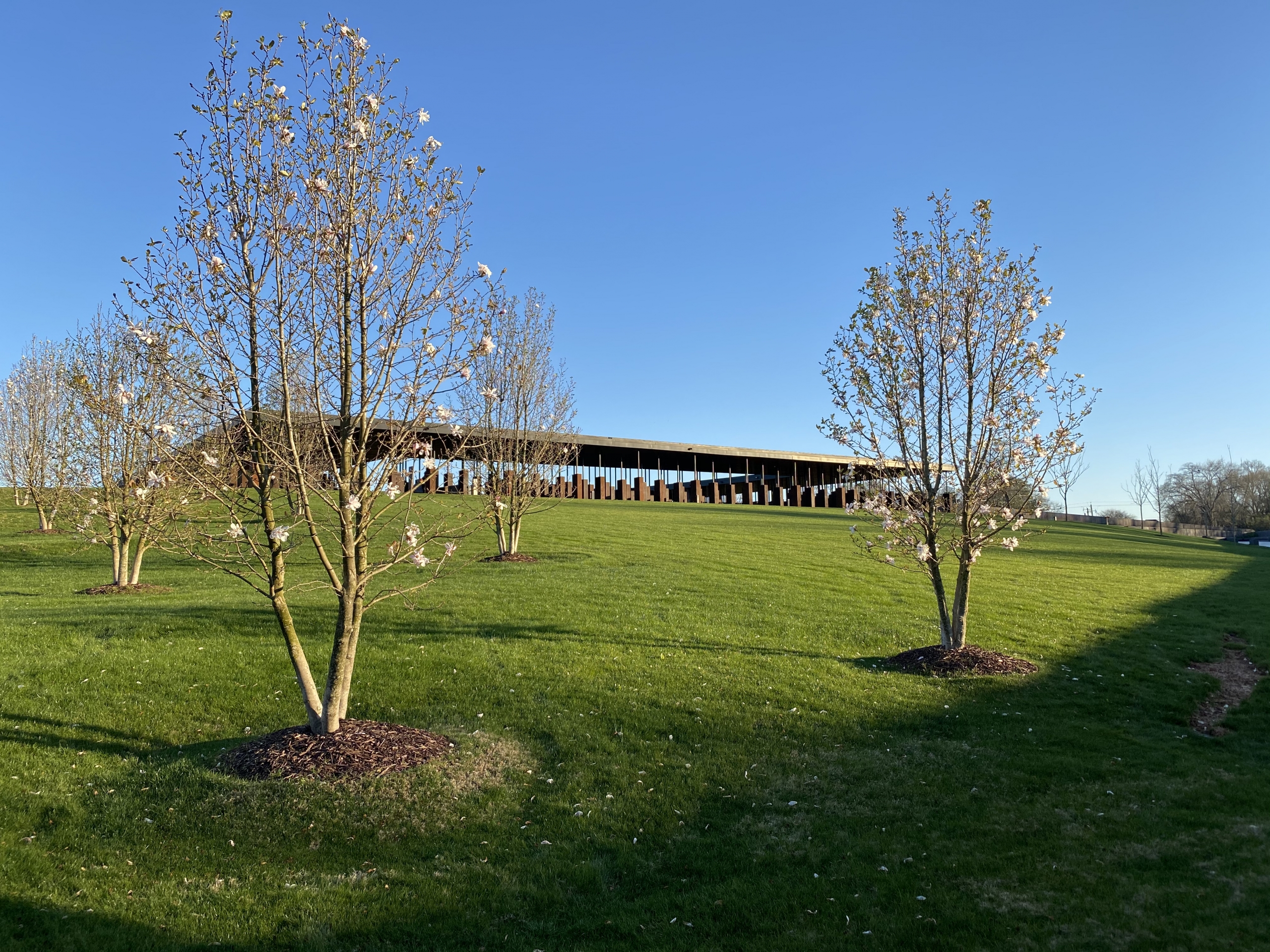 In a tragic vote yesterday, the City Council in Montgomery, Alabama failed to pass an ordinance that would have required the use of face masks in public. This vote came after an impassioned plea from local doctors:

Jackson Hospital pulmonologist William Saliski cleared his throat as he started describing the dire situation created by the coronavirus pandemic in Montgomery to its City Council before they voted on a mandatory mask ordinance. “It’s been a long day, I apologize,” he said.

“The units are full with critically-ill COVID patients,” Saliski said. About 90% of them are Black. He said hospitals are able to manage for now, but it’s not sustainable. “This mask slows that down, 95% protection from something as easy as cloth. … If this continues the way it’s going, we will be overrun.”

More doctors followed him to the microphone, describing the dead being carried out within 30 minutes of each other, and doctors being disturbed when people on the street ask them if the media is lying about the pandemic as part of a political ploy.

There’s a lot to unpack here. Note that Salisky said that units at the hospital are full with critically ill patients. But also note especially that the newspaper adds that he said 90% of the patients are black. Finally, he said that without intervention, the hospital certainly will be overrun.

The intervention measure proposed is simple and direct. Salisky claimed 95% reduction in transmission with a mask. I’m not so sure on that number, but it is becoming increasingly clear that masks, especially when coupled with social distancing, make a huge difference in reducing transmission.

We need to set the stage properly before getting to the details of the council’s vote in order to fully appreciate it.

Montgomery has a truly sordid past. As the Equal Justice Initiative has noted, Montgomery was Alabama’s center for the slave trade. EJI erected this plaque on Commerce Street in downtown Montgomery: 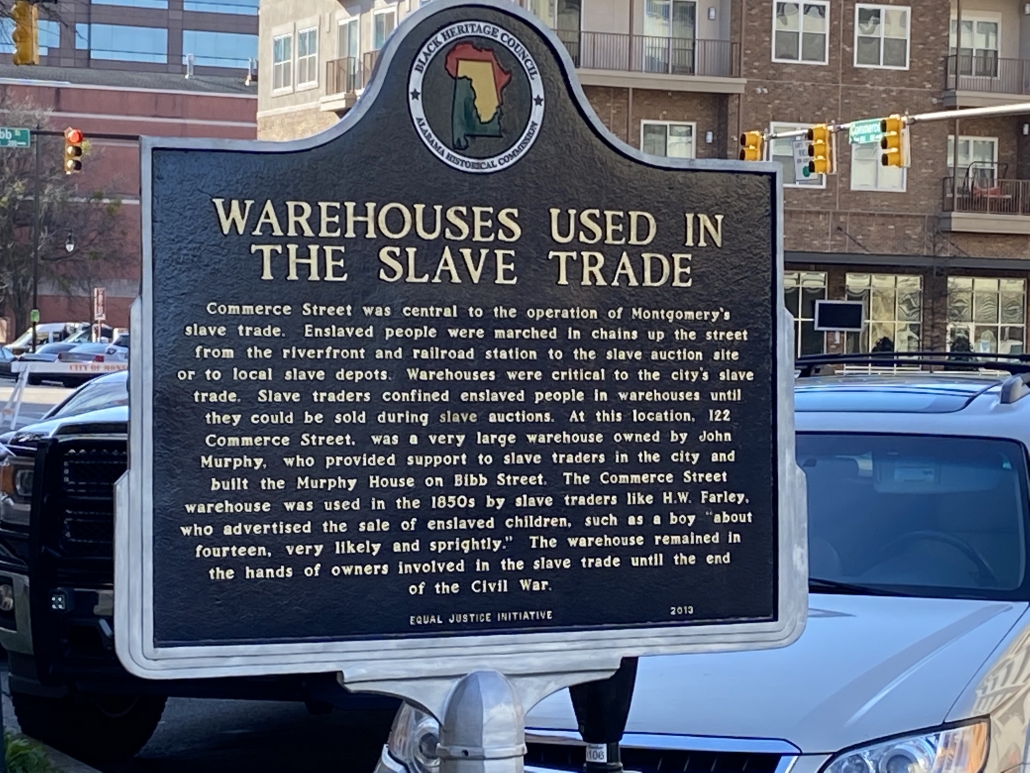 That’s right. Humans were literally warehoused between auction dates in Montgomery. In a bit of rare social justice, that building, 122 Commerce Street, is now one of several Equal Justice Initiative facilities in Montgomery: 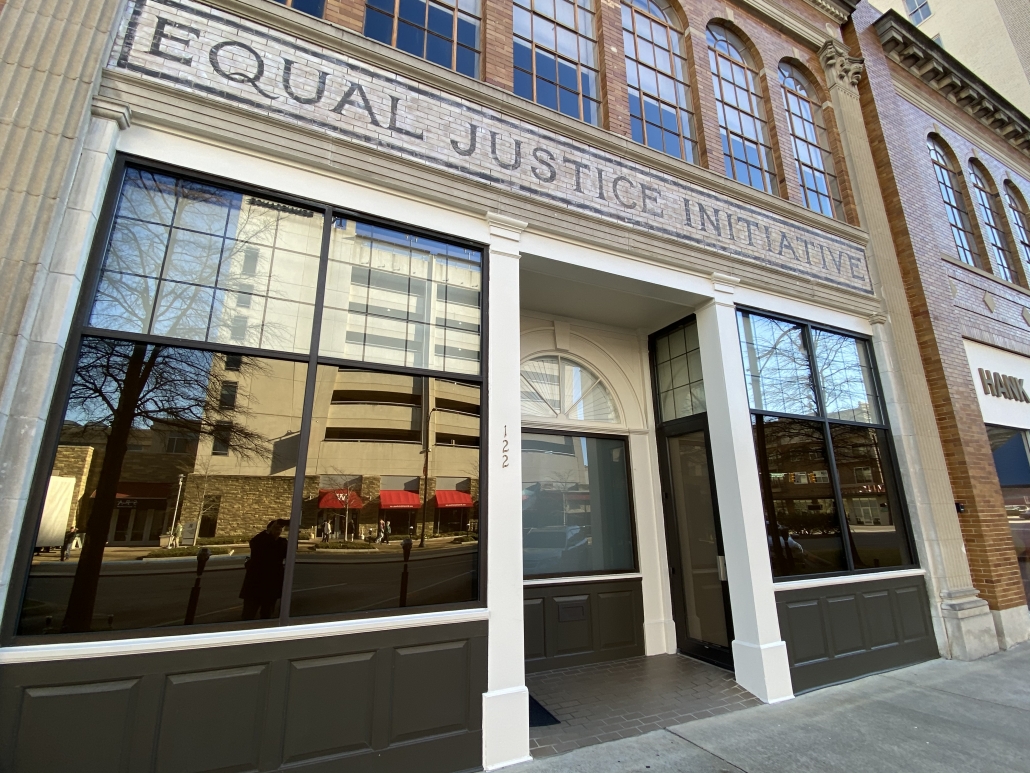 I have these photos because, as I mentioned previously, I had the opportunity in February to travel to Montgomery with a busload of people from here in the Gainesville area. We visited two EJI facilities, the National Memorial for Peace and Justice (seen in the featured image for this post) and the Legacy Museum. We also made the approximately one hour bus trip to Selma, where we experienced the Footprints to Freedom Tour which included stops at the National Voting Rights Museum and Institute, the Slavery and Civil Rights Museum and a walk across the Edmund Pettis Bridge.

It turns out we were far from alone in making this trip. In November of 2018, the Montgomery Advertiser noted a significant uptick in visits to Montgomery and traced them directly to the opening of the National Memorial and Legacy Museum that April:

Over 250,000 people have visited the Equal Justice Initiative’s downtown museum and memorial to lynching victims since the sites opened in April. More than that, the burst of international attention that came with those sites has turned the city into a destination, instead of a stop on the way to something else. That’s led more people to discover the city’s other historic sites and attractions, from Martin Luther King Jr.’s church, to the site where Rosa Parks boarded the bus.

“EJI has put Montgomery on the world’s radar,” he said. “I think Montgomery is in the best position for tourism appeal than it has ever been.”

Hotel room stays in Montgomery inched up by about 5,500 in 2017, according to state figures. This year they’re up 97,579 through October, according to the Montgomery Area Chamber of Commerce’s Convention and Visitors Bureau.

It should also be noted that Montgomery’s demographics are 61% black and only 33% white.

So with this rich history of civil rights activism, burgeoning civil rights tourism and a population 61% black, surely Montgomery’s City Council would vote for an ordinance that would slow down a disease where one doctor characterized those hospitalized as 90% black, wouldn’t they?

Not so fast. This is, after all, still Alabama. Here’s a link to the current Montgomery City Council. In a city that has 61% black citizens and only 33% white, the City Council has five white men, three black men and one black woman. Hardly representative.

Returning to the Advertiser story on last night’s vote:

After they spoke, and before the council voted on a proposal by Councilman C.C. Calhoun to mandate mask-wearing in public in Montgomery, Councilman Brantley Lyons questioned whether masks and six-foot distancing really helps. They do, the doctors replied. Lyons was unmoved. “At the end of the day, if an illness or a pandemic comes through we do not throw our constitutional rights out the window,” Lyons said.

From the crowd, doctors called for him to visit the hospital sometime.

Instead, the council killed the ordinance after it failed to pass in a 4-4 tie, mostly along racial lines, with Councilman Tracy Larkin absent. Councilman Clay McInnis voted with three Black council members — Calhoun, Oronde Mitchell and Audrey Graham — in favor of the ordinance. Lyons, Charles Jinright, Richard Bollinger and Glen Pruitt voted against it.

Only one white man voted for the ordinance. Sadly, one of the black men on the council was absent. I haven’t seen anywhere whether there might be an attempt at a new vote with all members present, since if no members change their vote, it would have a good chance at passage.

But note especially the behavior of Brantley Lyons. He asked the doctors whether it is true the masks and distancing would help prevent spread of the disease. Even though the doctors assured him it was true, Lyons trotted out the trope that the frothy right has been spewing all through the pandemic. Trying to claim that an ordinance mandating masks somehow would “throw our constitutional rights out the window” is the same sort of stupid rhetoric that racist conservative white people have spewed for generations whenever blacks sought equal protection under the law. And that circles back perfectly on the first quote from this article, where the doctors described being upset when the public approaches them to ask if the media is lying about the pandemic as part of a political ploy.

We know exactly where the real political ploy is coming from. Donald Trump is saying the quiet part out loud to fan the flames of racism in our country and he is directly responsible for these ideas spreading rapidly through people who listen to OAN and Fox News creating the narrative that the pandemic is fake. There also is no doubt that there is a huge component of racism in this entire process. Trump doesn’t hide his, but two-bit worthless politicans like Brantley Lyons happily spew this bunk without regard to the real and ongoing danger to the black citizens of Montgomery. You can rest assured that if this disease primarily attacked old white men, those not wearing masks would risk being shot on sight.