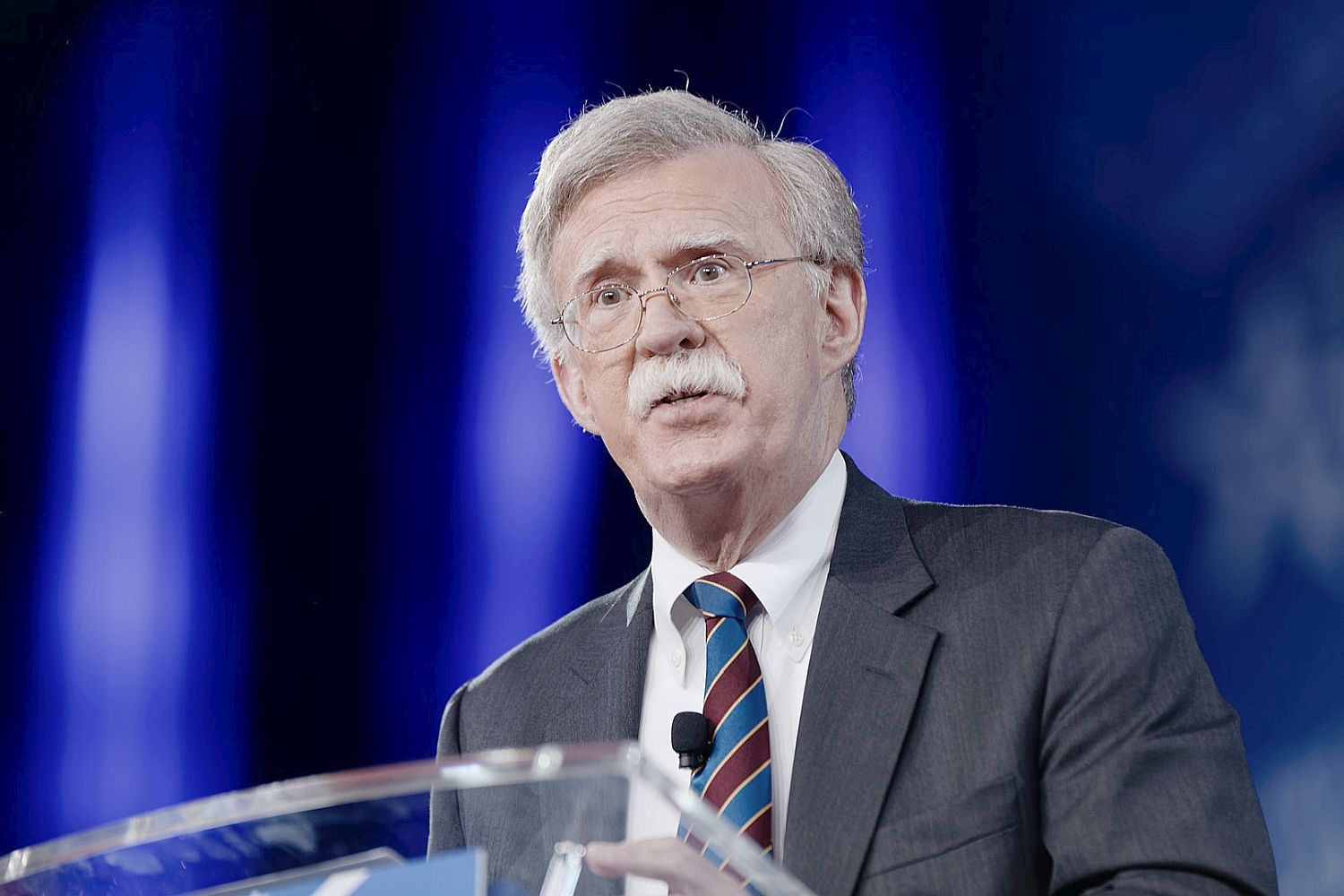 As you no doubt heard, in addition to suing John Bolton for breach of contract over his Trump book, the Trump Administration has also asked for a Temporary Restraining Order against Bolton, purportedly with the goal of getting him to do things that are no longer in his control. At one level, the legal actions seem designed to make Bolton’s book even more popular than it would otherwise be — while starving him of any royalties for the book. Judge Royce Lamberth, who has a history of pushing back against Executive abuse (including claims involving classification) has been assigned the case; he scheduled a hearing for tomorrow.

I agree with the bulk of the analysis that these legal efforts will fail, to the extent they’re really trying to prevent Bolton from releasing the book. I also agree with analysis about the uphill climb Bolton faces to avoid having his profits seized.

That said, I can’t help but notice the way the filings set Bolton up — possibly, even for prosecution (which LAT reports remains under consideration), but also for a remarkable comparison with Trump’s first National Security Advisor, Mike Flynn.

Legally, the filings do what they need to do to seize Bolton’s profits, and will probably succeed (meaning you can buy the book and your money will go to the US Treasury). But, as noted, they’re not written to actually win an injunction, most especially against Bolton’s publisher, Simon & Schuster.

The filings do something else, though. They tell how Bolton apparently shared drafts of his manuscript before it had been cleared, which in turn got shared with the press.

35. On January 26, 2020, the New York Times published an article describing information purportedly “included in drafts of a manuscript” that Defendant, apparently without any protections for classified national security information, had “circulated in recent weeks to close associates.” The article set forth information allegedly contained in “dozens of pages” of the manuscript. A true and correct copy of this article is attached hereto as Exhibit F.

36. On information and belief, the January 26, 2020 article led to a tremendous surge in publicity for the pre-sales of the book, including hundreds of news articles, discussion on major television networks, statements by members of Congress, and widespread circulation of the article’s content on social media.

37. On January 27, 2020, the Washington Post published a separate article describing content contained in The Room Where it Happened, relying on the statements of “two people familiar with the book,” indicating, on information and belief, that Defendant had disclosed a draft of the manuscript to others without receiving prior written authorization from the U.S. Government. A true and correct copy of this article is attached hereto as Exhibit G.

38. Thus, notwithstanding this admonition, in late January 2020, prominent news outlets reported that drafts of Defendant’s manuscript had been circulated to associates of Defendant. These articles included reports from individuals supposedly familiar with the book, which indicates, on information and belief, that Defendant had already violated his non-disclosure agreements while purporting to comply with the prepublication review process. See supra ¶¶ 27, 29; see also Exhs. E & F

They lay out evidence that Bolton specifically knew the dangers of disclosing classified information, most ironically with a citation of his complaints about Edward Snowden (who also had his profits seized).

Defendant knows well the threat posed by disclosing classified information that might benefit the Nation’s adversaries. See John Bolton, “Edward Snowden’s leaks are a grave threat to US national security,” The Guardian, https://www.theguardian.com/commentisfree/2013/jun/18/edwardsnowden-leaks-grave-threat (June 18, 2013). Congress does as well, as reflected in its decision to criminalize the unauthorized disclosure of classified information. See, e.g., 18 U.S.C. §§ 641, 793, 794, 798, 952, 1924.

They provide multiple declarations — from Mike Ellis, the Trump hack who has politicized classified information in the past, from National Counterintelligence Director Bill Evanina claiming this is the kind of information our adversaries look for, from Director of NSA Paul Nakasone talking about the specific vulnerability of SIGINT, and from Director of National Intelligence John Ratcliffe, whose name the TRO misspells and whose experience looks exceedingly thin compared to the others, along with classified declaration from Ellis. Even though the declarations were obviously carefully curated by Ellis, these are nevertheless the kinds of things courts usually bow to, when the government makes claims about classification. While neither we nor Bolton or his lawyer will get to review the actual claims being made, such declarations are usually sufficient to get the desired recourse.

Perhaps notably, the filings include a letter from John Eisenberg (whose shenanigans regarding the Ukraine call Bolton made more significant), written on June 11, at a time when the White House already knew Bolton was moving to publish, accusing Bolton of publishing this information for financial gain.

Fourth, your self-serving insinuations that the NSC review process has been directed at anything other than a good faith effort to protect national security information is offensive. Your client has taken classified information, including some that he himself classified, and sold it to the highest bidder in an attempt to make a personal profit from information that he held in trust as a public servant–and has done so without regard for the harm it would do to the national security of the United States.

Effectively, this package of filings does nothing to prevent the book from coming out. But it very carefully lays a record to meet the elements of an Espionage charge. Given this notice, the government would be in a position to point to the publication of the book (that Bolton couldn’t stop now if he wanted) and prove that Bolton had an obligation to keep these things secret, he knew the damage that not doing so could cause, and yet nevetheless published the information.

Whether they will prosecute or not is unclear. But these filings make it far easier to do so.

The White House is preparing to claim that John Bolton is akin to Edward Snowden, solely because he aired Trump’s dirt in a book.

This all comes at the same time as the government is making extraordinary efforts to prevent Mike Flynn from being punished for secretly working for a frenemy country while getting classified briefings, and calling up the country that just attacked us in 2016 and discussing how Russia and the Trump Administration had mutual interests in undermining Obama’s policies.

The same DOJ that is magnifying Bolton’s risk for an Espionage prosecution found nothing inappropriate in Flynn calling up the country that had just attacked the US and teaming with that hostile country against the current government of the United States.

Nor was anything said on the calls themselves to indicate an inappropriate relationship between Mr. Flynn and a foreign power. Indeed, Mr. Flynn’s request that Russia avoid “escalating” tensions in response to U.S. sanctions in an effort to mollify geopolitical tensions was consistent with him advocating for, not against, the interests of the United States. At bottom, the arms-length communications gave no indication that Mr. Flynn was being “directed and controlled by … the Russian federation,” much less in a manner that “threat[ened] … national security.” Ex. 1 at 2, Ex. 2 at 2.

Indeed, the Attorney General even claimed the call was “laudable,” even while lying that it didn’t conflict with Obama’s policies.

But it’s not just in the courts where DOJ is working hard to protect the guy who really did harm the US. In an effort to sow the propaganda case for Mike Flynn, the Trump Administration has been on a declassification spree, including — by Ratcliffe — the transcripts of some (but not all) of Flynn’s calls with Sergey Kislyak, something that has never been done before. Significantly, the claims that Nakasone and Ratcliffe make in their declarations in the Bolton case, especially with regards to disclosing SIGINT burns the collection going forward, were clearly violated when Ratcliffe declassified the transcripts.

To be honest, I won’t weep if Bolton is prosecuted. He would have had more legal protection had he testified during the impeachment inquiry, which would have done more good for the country. It would be an abuse, but such abuse has been directed against far more vulnerable and admirable people.

But the comparison of the claims Mike Ellis is making about Trump’s third National Security Advisor with the treatment given his first — the guy who actively sold out his country rather than did so with his inaction — only serves to emphasize how Trump subjects what traditionally gets called national security to loyalty.

The greatest “national security” sin a Trump Administration official can commit, this comparison shows, is disloyalty to Donald Trump.