Sidney Powell Proves She (and Everyone Else, including Timothy Shea) Was Wrong about the Logan Act

Sidney Powell has released the next set of documents that Jeffrey Jensen has been serially feeding her and through her the frothy right.

They prove that the entire premise of DOJ’s Motion to Dismiss the Flynn prosecution — and everything Powell has been spewing for a year — is wrong.

That’s because the Timothy Shea Motion to Dismiss claims that FBI seized on the Logan Act as a reason — the sole reason — to extend the investigation into Mike Flynn.

Indeed, Shea’s memo claimed there was no criminal purpose to interview Flynn.

Notably, at this time FBI did not open a criminal investigation based on Mr. Flynn’s calls with Mr. Kislyak predicated on the Logan Act. See Ex. 7 at 1-2.4 See Ex. 3 at 2-3; Ex. 4 at 1-2; Ex. 5 at 9. The FBI never attempted to open a new investigation of Mr. Flynn on these grounds. Mr. Flynn’s communications with the Russian ambassador implicated no crime. This is apparent from the FBI’s rush to revive its old investigation rather than open and justify a new one, see Ex. 7 at 1-2, as well as its ongoing inability to espouse a consistent justification for its probe in conversations with DOJ leadership, See Ex. 3 at 5. In fact, Deputy Attorney General Yates thought that the FBI leadership “morphed” between describing the investigation into Mr. Flynn as a “counterintelligence” or a “criminal” investigation. Id.

But notes from Tashina Gauhar recording a January 25 meeting on the interview confirm what I had laid out: the purpose of the interview was to assess whether Flynn had a clandestine or agency relationship with Russia — that is, whether he was an Agent of Russia, which is a crime under 18 USC 951, the crime the original investigation into Flynn was predicated on and the crime the investigation continued to be predicated on, even as other potential crimes — including but not limited to the Logan Act — got added.

Importantly, Gauhar recorded the conclusion of that meeting, which adds context to another of the claims Powell has made for the last year. She described how from a CI perspective, FBI “did not think [Flynn was an] Agent, but need to verify.” From a criminal perspective, FBI was “not willing to say at this point, now.” And from a view of compromise, FBI discussed defensive briefings (though it’s not sure whether for the White House or Flynn).

In a draft timeline, someone translated this into the conclusion that FBI “did not believe General Flynn was acting as an agent of Russia,” but without the clear caveat that Gaushar recorded, that the FBI needed to verify whether that initial conclusion was true. 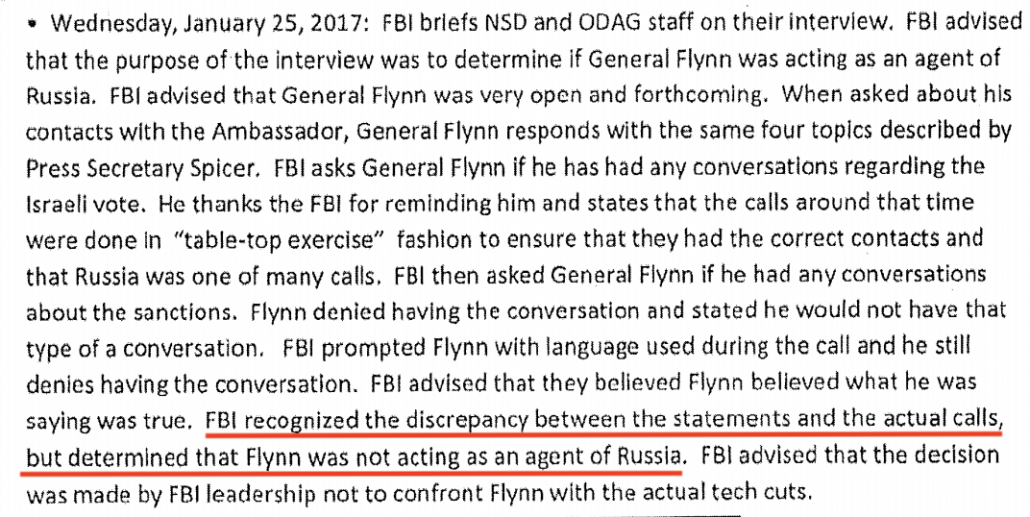 Viewed in context, this conclusion only reinforces the clear evidence that the FBI was investigating whether Flynn was a foreign agent (for Russia, in addition to what would become clear included Turkey), because this was the initial conclusion the FBI offered in a meeting the day after the interview reporting on their findings. But the entire record also makes it clear that FBI would continue to investigate that claim, whereupon they found more damning information against Flynn.

You may now dismiss every single claim about the Logan Act’s import in the investigation into Mike Flynn, as that was (transparently) all just gaslighting.

Furthermore, you can dismiss the claims about doctored 302s, because Gauhar’s notes directly map the final 302s, including the assertion that Flynn denied the substance of his calls both on Israel and sanctions.

In her filing misrepresenting what the notes say, Powell complains that the agents claimed Flynn first denied than admitted the number of calls; Gauhar only records the former, though it’s not even clear what the context is (that is, whether the question was about the number of calls on December 29 and 31, or the frequency of calls over the course of the Transition). In any case, that wasn’t a charged lie.

Gauhar even succinctly described, in real time, what the FBI had concluded: Flynn’s answers were false, but he appeared to believe them.

The FBI would develop, over time, additional reasons to know that Flynn had deliberately lied, most notably proof that the Transition team had discussed sanctions with him before the Kislyak call, making it clear Flynn had lied when he claimed he didn’t know about the sanctions at the time of his calls with Kislyak. Worse still, Flynn would ultimately admit that he created a cover email to hide what he had discussed in real time.

On January 25, it was reasonable to take Flynn’s demeanor and conclude he didn’t think he was lying. But not after you came across the record showing that he planned to cover up the calls as soon as they were made, even before the leaks gave reason for him to lie publicly.

Finally, Sidney Powell’s own filing totally undermines the government motion to dismiss in one other way. Powell asserts that the documents newly disclosed to her were “known to at least ten people at the highest levels” of DOJ and FBI.

These documents both corroborate information provided by others previously and provide new information known to at least ten people at the highest levels of the Department of Justice and the FBI.

Shea’s Motion to Dismiss was premised on a false claim that these facts weren’t known to the highest levels of DOJ. That insinuation has always been obviously false. But now Powell has made it clear she agrees. Which, if the DC Circuit reviews the Mandamus petition en banc (as a filing today staying the order suggests they’re likely to do), may be an important detail if Judge Emmet Sullivan ever gets to review how DOJ came to flip-flop on prison time for Flynn if they had all this information when they recommended prison time.

June Bug Goes to Ireland Trump Prepares to Do Something Even Billy Barr Has Said Might Be Obstructio...