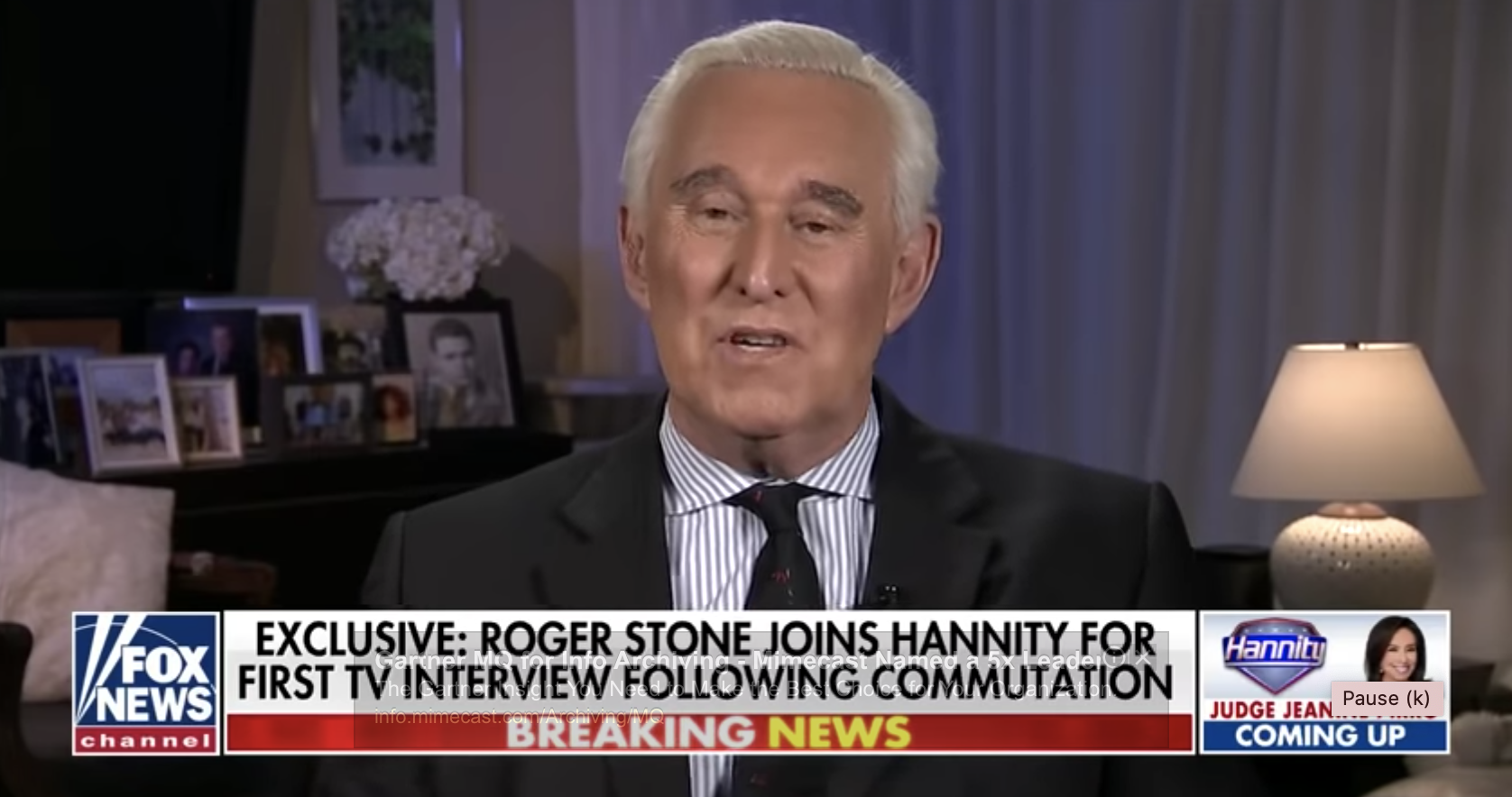 Last night, Roger Stone went on Sean Hannity’s show, mostly to lay the groundwork for withdrawing his appeal. But he also repeated a story he told at least twice shortly after his gag ended, describing how a Mueller prosecutor offered Stone leniency if he would testify that the content of some number of calls he had with Trump (29 in one telling, 36 in another) pertained to WikiLeaks.

Well, in the beginning of the case, Sean, I don’t think that [flipping on Trump] was their intention. But as they got closer and closer to having to issue the Mueller report and they realized that they had no Russian collusion because there was no Russian collusion, it was a hoax. On July 24, Jeannie Rhee, who was heading my prosecution within the Mueller team — that’s extraordinary in itself because she previously represented Hillary Clinton and the Clinton foundation in the illegal email server case, the missing email case. So she had a clear bias. She was a maximum donor to both of Hillary’s presidential campaigns. By the way, she has all the charm of a North Korean prison guard. She made it very clear to one of my lawyers — after a hearing she asked to see them privately — that if I would really remember certain phone conversations I had with candidate trump, if I would come clean, if I would confess, that they might be willing to, you know, recommend leniency to the judge perhaps I wouldn’t even serve any jail time. I didn’t have to think about it very long. I said absolutely not. There was no circumstance under which I would bear false witness against the president.

This story, as told, is impossible.

The problem is with the date.

In the version of the story Stone told to Lou Dobbs earlier this spring, Stone was quite clear: the meeting between this prosecutor and his lawyer happened on July 24, 2019.

Similarly, the version Stone told some Daily Caller hack stated that this conversation happened on July 24, 2019.

All three of these stories place this conversation on July 24, and two of them place it on July 24, 2019.

Jeannie Rhee withdrew from the case (and left DOJ) on April 16, 2019, before this discussion allegedly took place (unless it happened in 2018, which would raise a whole slew of different questions).

Mind you, in both the Hannity version and the Daily Caller version, Stone claims this conversation happened in the lead-up to the Mueller Report.

Their purpose was very clear. This was days before the Mueller Report. So they knew that their Russian section of the report was a dud, that they had nothing. So they wanted me to be their ham in their ham sandwich. And I declined, because it’s not true.

Rhee was at four hearings with Stone, post-indictment, before the report was issued:

The latter of those certainly was in the days before the Mueller Report was released, but it was also at a time when the report was drafted. So if the conversation happened then, it is unlikely such testimony would have been included in the report.

Indeed, it is better thought of as a part of the second part of the investigation into Stone, the one for which the raid on Stone’s house was an attempt, in part, to obtain the notebook in which Stone had written notes of every conversation he had with Trump during the campaign. And if that’s the case — if prosecutors asked Stone to testify about 29 to 36 calls that, because of the rat-fucker’s carelessness (or instincts for self-preservation) they knew from his notes pertained to WikiLeaks — then this publicity tour about what a hero he was for risking prison to protect the President is just that, PR.

Effectively, Stone is telling this story on every show that Trump watches closely, presumably to reassure the President he succeeded in protecting him. With that notebook out there, it’s not at all clear that is true.