And the Good Troublemaking Goes On 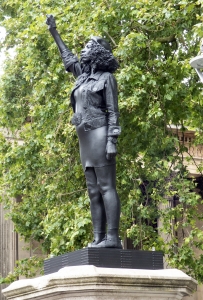 “A Surge of Power” sculpture of Jen Reid in Bristol, UK, commemorating her stand with raised fist in place of a toppled statue of a British slave trader
[h/t Sam Saunders, Attribution-ShareAlike 2.0 Generic (CC BY-SA 2.0)]

I went to bed in tears last night.

They weren’t tears of pain or shock or outrage. They were the tears that college presidents cry at the retirement of the last of the teachers and professors who helped make them who they are. The tears sports figures cry at the death of the last player on their favorite great championship team. The tears you cry when the last of your grandparents “goes home.” They’re the tears of grief at the loss you’ve suffered, and the tears that say “It’s your turn now.” You have to tell the stories you learned at their knees, as you go on to make a difference in the lives of others as they made a difference in your life.

I’m still in tears this morning, because I’ve got lots of stories to tell. (That’s a hint, folks, that this might be a tad lengthy. But don’t let that deter you from reading. They’re good stories.)

As I noted in January after John Lewis announced that he had stage 4 cancer, John Lewis was not always old. He was young when he started making “good trouble” as one of the co-founders of SNCC, one of the first Freedom Riders, and one of the lead marchers on the Edmund Pettis Bridge on March 7, 1965. As the best storyteller at the Root, Michael Harriot, spelled out in a Twitter thread, this was a march with a purpose:

The Selma to Montgomery march wasn’t a symbolic demonstration. It wasn’t even an original idea. See, black ppl all over Ala. were attacked when they tried to register to vote. So local organizers would get large groups of people to march to their respective courthouses.

That’s how those marches started. They weren’t protesting. They were GOING TO REGISTER. And they figured: “If we’re in a group, they can’t beat us all.” But y’all know white people. They will definitely try their best. I think they call it “American exceptionalism.”

They were headed to Montgomery to confront the governor in person and demand their right to vote when Bloody Sunday happened. But here’s the part about the Selma to Montgomery marches most people are never told: It was NOT nonviolent.

Let me spell it out: the Civil Rights movement led by Martin Luther King Jr, John Lewis, and others, was only non-violent from the perspective of the how those in the movement acted. On Bloody Sunday, Lewis and his fellow marchers may have acted non-violently, but Sheriff Clark and his fellow police most certainly did not.

It’s hard to type that without noticing the other big story in today’s news cycle, which puts the coverage of John Lewis’ life alongside this:

“What is happening now in Portland should concern everyone in the United States,” said Jann Carson, the interim executive director of the American Civil Liberties Union of Oregon. “Usually when we see people in unmarked cars forcibly grab someone off the street, we call it kidnapping. The actions of the militarized federal officers are flat-out unconstitutional and will not go unanswered.”

One demonstrator, Mark Pettibone, 29, said agents who were in camouflage but lacked any insignia forced him into an unmarked van and did not tell him why he was being arrested. Deploying agents without any identification violates the protocols of police departments across the United States.

Mark Morgan, the acting secretary of Customs and Border Protection, said the agents did display signs that they were federal agents but withheld their names for their own safety.

You know what would keep these federal agents safe? Staying out of Portland in the first place. From the Oregonian, here’s more of the news from Portland:

During a news conference Friday with Police Chief Chuck Lovell, [Portland Mayor Ted] Wheeler said the city has no oversight authority on federal officers during downtown demonstrations. He reiterated that Portland officials didn’t ask for federal officers to be deployed and said local officers can end any violence that occurs on the streets without federal help.

“Mr. President, we see right through you,” Wheeler said. “So do us a favor: Keep your troops in your own buildings or have them leave our city.”

U.S. District Judge Michael Simon on Friday granted the oregnization’s [sic] request to add the U.S. Department of Homeland Security and the U.S. Marshals Service to a temporary restraining order preventing police from dispersing, arresting or targeting journalists or legal observers at protests.

Meanwhile, the president and Homeland Security Acting Secretary Chad Wolf have blamed state and city leaders for not doing enough to end violence that occurs during protests in Portland and in recent days have doubled down on their plans to keep federal officers on Portland streets.

Lovell said although the police bureau’s main headquarters are sandwiched between the Mark O. Hatfield federal courthouse and the Edith Green-Wendell Wyatt Federal Building, Portland police and federal officers have operated separately. He did say both jurisdictions do communicate with one another and know when the other engages in some form of action during demonstrations.

Lovell and Wheeler said they didn’t meet with Wolf while he was in Portland, but the police chief later said police union president Officer Daryl Turner did.

Of course he did. It seems police union leaders are following the lead of Catholic bishops like Boston’s former Cardinal Bernard Law, who would rather cover up violent abuse by officials in their organizations than address the actual problem itself.

James Gardner Clark, Jr. may be dead, but his spirit carries on. Unfortunately for Sheriff Clark, so does John Lewis’, and it’s a helluva lot stronger.

Now-Senator Doug Jones (D-Alabama) was the local prosecutor in 2002 (!) who finally convicted the last of the Klan members who bombed the 16th Street Baptist Church in 1963 (!!!), killing 14-year-old Addie Mae Collins, Cynthia Wesley and Carole Robertson and 11-year-old Denise McNair in the basement of the church as they awaited the start of worship. Doug Jones is not dead, and he’s still making good trouble.

[Note to Alabamans: If you want to make some good trouble yourself, voting to keep Doug Jones in the US Senate in November’s election would be a very good way to do it.]

But let’s get local. Last month here in metro Kansas City, students at a local school district made a bunch of school board members, administrators, and teachers in their school district very nervous as they responded to a simple call in a single tweet, put out because of some tone-deaf statements made by those same board members at the BLM protests in the wake of George Floyd’s murder in Minnesota:

She did, and her classmates responded. They said out loud what they had experienced, and forced school and community leaders to admit to the reality of racism in their midst, and its impact on the student they claim to value so much. Even more powerfully, students in other local districts in the area picked up on the hashtag and started their own, to tell the stories of their own districts.

Some teachers and administrators reacted defensively, and others were noticeably silent. But then there were those who were not only shocked, but glad to be shocked so that change might happen. All across metro Kansas City, young people forced adults to own their actions, or more critically, their inactions, by telling stories like these (from the KC Star):

In Lee’s Summit, more than 100 students, teachers and residents gathered for a rally at the administration building, saying they were “fed up” with as lack of response to complaints of racism, sexism, homophobia and xenophobia.

The chanting quieted as Yonny Astatke, a 2019 graduate, shared the racism and fear he faced during his days in the district.

He was a sophomore at Lee’s Summit High School when he posted his political viewpoints on social media. Another student replied with a threat of violence: “Black Knives Matter.”

“I was terrified,” he told the crowd. He reported the incident to school leaders. “They made me shake his hand. They made me shake the hand of the person who threatened violence toward me,” he yelled through a megaphone. “I complied because I was afraid. I am vehemently frustrated with our school district.”

In Blue Springs this month, students created the hashtag #BlackatBSSD on Twitter and posted about their experiences: Many have been called the N-word. One said a white classmate told him he wouldn’t mind dating a Black girl but wouldn’t marry one.

“That is why we are taking action,” a Blue Springs statement said. “We are reviewing and changing policies, addressing teachers with violations, creating an anti-racism campaign and so much more.”

The Black Student Union at Blue Valley Northwest High School in Overland Park, organized a demonstration last week as well. Parents and students said they faced discrimination in the district, or pointed to a lawsuit filed last year in which a Black student said she was told that her skin was “too dark” to perform with the school dance team. She sued the district for racial discrimination. The dance team’s coach, Carley Fine, was fired.

“They don’t feel seen,” [Shawnee Mission school psychologist Brandi] Newry said. “They don’t feel respected. There are Black children in a building where there is no one, no one, who looks like them. It just about makes me cry.”

These kids made good trouble last month, just by recounting what they had had to deal with. They made lots and lots of good trouble. [Edited to add: These kids also did more than just talk. They put together a list of changes they want the district to make in terms of teachers, administrators, and curriculum, and submitted these to the school board at the same meeting the first African American was seated as a member of the school board.]

I wonder what lies ahead for these students. What will the reactions be when they come back to school (in person or virtually) and have to deal with these teachers and administrators again? What will they do as they go to college or enter the workforce, and face racism in other settings?

And which one of them will end up making good trouble as a member of Congress?

Rest in peace, my brother John — your good troublemaking goes on.