The Good Trouble of John Lewis 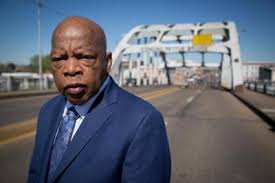 Another lion has left the earth. John Lewis. And that damn bridge in Selma needs to be immediately renamed for him, as has been discussed for years. Do it now. But finally abolishing the name and specter of the Edmund Pettus Bridge will not be enough. Structurally, the Pettus is not very large, it only has four piers, but it spans the arc of civil rights. The very civil rights still at issue today. John Lewis is the epitome of that arc.

Representative John Lewis, a son of sharecroppers and an apostle of nonviolence who was bloodied at Selma and across the Jim Crow South in the historic struggle for racial equality and who then carried a mantle of moral authority into Congress, died on Friday. He was 80.
……
Mr. Lewis’s personal history paralleled that of the civil rights movement. He was among the original 13 Freedom Riders, the Black and white activists who challenged segregated interstate travel in the South in 1961. He was a founder and early leader of the Student Nonviolent Coordinating Committee, which coordinated lunch-counter sit-ins. He helped organize the March on Washington, where Dr. King was the main speaker, on the steps of the Lincoln Memorial.

Mr. Lewis led demonstrations against racially segregated restrooms, hotels, restaurants, public parks and swimming pools, and he rose up against other indignities of second-class citizenship. At nearly every turn he was beaten, spat upon or burned with cigarettes. He was tormented by white mobs and absorbed body blows from law enforcement.

This day was clearly coming, it was widely known Lewis was not well and in the throes of cancer. The death also comes as the racist cancer in society he fought so hard as a youth is center stage yet again. Not just in the abuse in the streets by police, not just in the Black Lives Matter movement, but in the despair of the poor and downtrodden. And, importantly, in favor of all citizens voting.

“Generations from now,” Obama said when awarding him a Medal of Freedom in 2011, “when parents teach their children what is meant by courage, the story of John Lewis will come to mind — an American who knew that change could not wait for some other person or some other time; whose life is a lesson in the fierce urgency of now.”

The fierce urgency of now is every bit as critical as at any time in history.

Lindsey Graham Provides Yet More Proof that Peter Strzok Didn’t Have It... And the Good Troublemaking Goes On