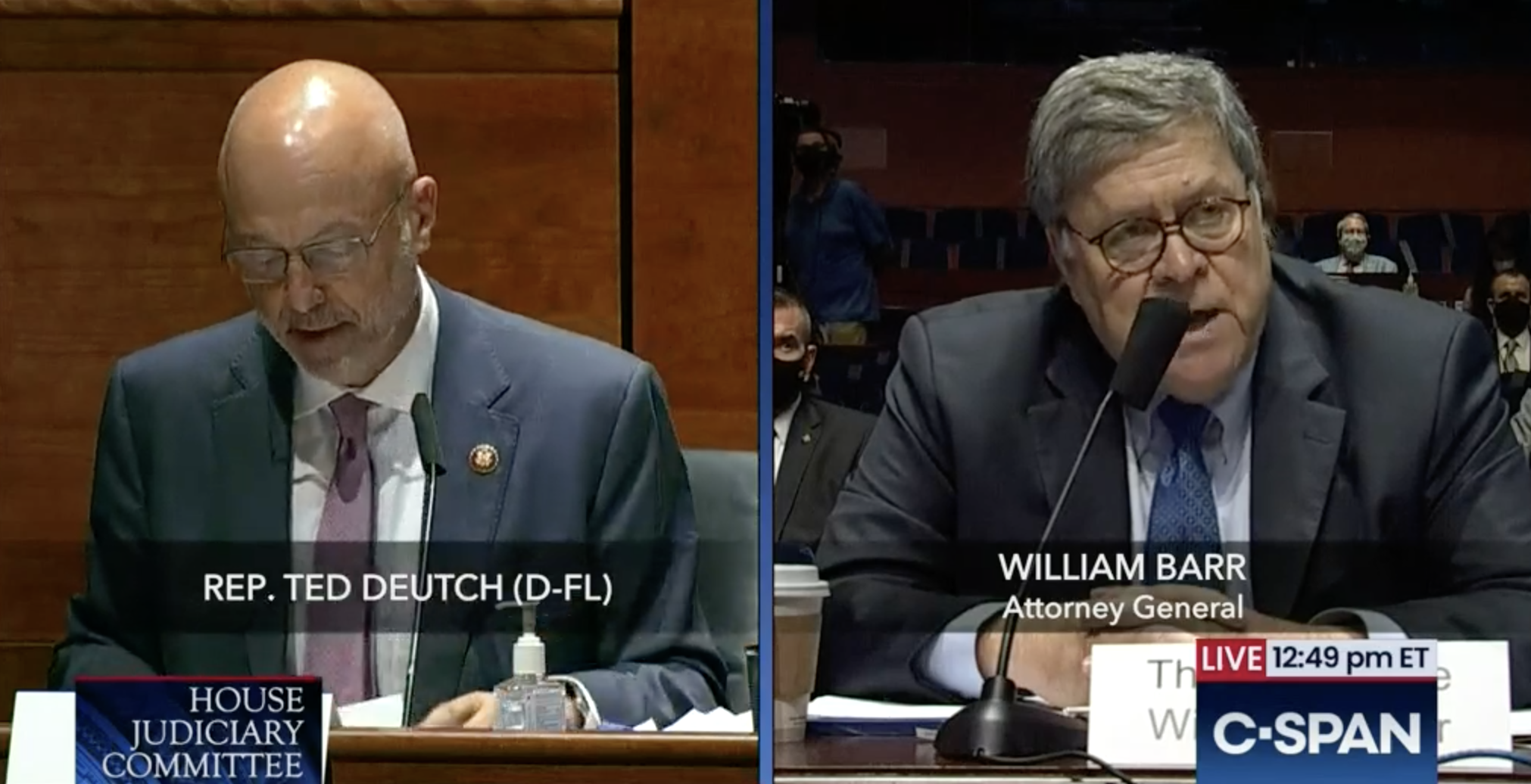 The judge agreed with me, Congressman.

The judge agreed with me.

The judge agreed with me.

Bill Barr spent a lot of time in yesterday’s hearing claiming the federal officers in Portland have to violently suppress the protests in Portland because the protests are an assault on the Federal courthouse.

He also lied, repeatedly, to cover up the assault on the judiciary he ignored.

In just one exchange with Ted Deutch, Barr claimed at least six times that Judge Amy Berman Jackson agreed with his analysis on the Roger Stone sentence.

Barr tried — and ultimately succeeded — in dodging Deutch’s question, which is whether there was ever a time in the history of the Justice Department where DOJ considered threats against a witness and a judge just a technicality.

Barr: The judge agreed with our analysis.

Deutch: Can you think of even one? I’m not asking about the judge. I’m asking about what you did to reduce the sentence of Roger Stone?

Barr: [attempts to make an excuse]

Deutch: Mr. Attorney General, he threatened the life of a witness —

Barr: And the witness said he didn’t feel threatened.

Deutch: And you view that as a technicality, Mr. Attorney General. Is there another time

Deutch: Sure. I’m asking if there’s another time in all the time in the Justice Department.

Deutch: It’s unfortunate that the appearance is that, as you said earlier, this is exactly what you want. The essence of rule of law is that we have one rule for everybody and we don’t in this case because he’s a friend of the President’s. I yield.

The exchange is interesting for a lot of reasons — Barr’s story on the timeline on replacing Jesse Liu and Timothy Shea’s subsequent interventions in the Stone and Mike Flynn cases does not hold up in the least, though now he’s on the record, under oath, with that story.

As to the part where there is a public record, Barr was wrong on the facts. For example, while Barr claims that Randy Credico said he didn’t feel threatened by Stone after Stone made threats against him, Credico has said he feared what Stone’s thuggish friends might do. And, as Amy Berman Jackson noted in the sentencing hearing, Credico described to the grand jury how he wore a disguise and lived in hiding out of fear.

The revised sentencing memo that Barr falsely claimed ABJ agreed with suggested “the Court [] not [] apply the eight-level enhancement for threatening a witness with physical injury.” But ABJ explicitly said the guideline applied, but she said would account for the nature of the threats and Credico’s leniency letter in deciding whether the sentence should apply the full guideline enhancement.

The guideline plainly applies. Even if one considers the threat to the dog to be property damage, that’s covered too. Application Note 5 explains that the guideline includes threats of property loss or damage, quote, Threatened as a means of witness intimidation.

But as the second government’s memorandum appears to be suggesting, as the defense has argued, the vague nature of the threat concerning any physical harm and its actual impact on Mr. Credico can be considered when I determine whether this sentence should fall within the guideline range or not, and they will.

In other words, ABJ said Stone should be punished for the kinds of threats he made about Credico, but that the enhancement itself was too severe.

ABJ similarly argued the opposite of what Barr did with regards to the enhancement for Stone’s obstruction of his prosecution, which the revised sentencing memo claimed, “overlaps to a degree with the offense conduct in this case,” and argued may not have, “actually prejudiced the government at trial.”

The supplemental memorandum says: Well, this enhancement overlaps, to a degree, with the offense conduct in this case.

I’m not sure I understand that assertion. As proposed, the guideline is not meant to cover any pre-indictment conduct at all. And, yes, the guideline says it doesn’t apply if obstruction of justice is the charge of conviction; but, that’s not true, say the guidelines, if there is further obstruction during the prosecution.

The government also said in its supplemental memo: It’s unclear to what extent the defendant’s obstructive conduct actually prejudiced the government at trial. But that isn’t the test. Obstruction is an attempt; it doesn’t have to be successful. And the administration of justice is a little bit more than whether they got in the prosecution’s way.

And she laid out, at length, the import of Stone’s threats and lies.

Even after he first denied and then acknowledged personally selecting the crosshairs photo, he sat there telling me: Yes, I’m going to follow any restrictions on talking about the investigation; but, forgetting to mention that he had a book on the subject wending its way to publishers as we spoke. I certainly haven’t seen anything that would attribute that to mere anxiety.

The defense also says his conduct, quote: Didn’t cause significant further obstruction of the prosecution of the case, close quote.

But, certainly, A., threatening or intimidating a juror or a fact-finder in the case; F., providing false information to a judge; and J., not complying with the restraining order. While the orders here are not the ones specifically mentioned in the list, it’s not necessary that there’s an exact fit. The list is supposed to be illustrative.

And given the similarity of the conduct in this case to what’s listed in A., F., and J., I find that the guideline applies. The defendant engaged in threatening and intimidating conduct towards the Court, and later, participants in the National Security and Office of Special Counsel investigations that could and did impede the administration of justice.

I suppose I could say: Oh, I don’t know that I believe that Roger Stone was actually going to hurt me, or that he intended to hurt me. It’s just classic bad judgment.

But, the D.C. Circuit has made it clear that such conduct satisfied the test. They said: To the extent our precedent holds that a §3C1.1 enhancement is only appropriate where the defendant acts with the intent to obstruct justice, a requirement that flows logically from the definition of the word “willful” requires that the defendant consciously act with the purpose of obstructing justice.

The behavior was designed to disrupt and divert the proceedings, and the impact was compounded by the defendant’s disingenuousness. As the opinion in Henry pointed out in U.S. versus Maccado, 225 F.3d 766, at 772, the D.C. Circuit even upheld a §3C1.1 enhancement for failure to provide a handwriting example because such failure, quote, Clearly has the potential to weaken the government’s case, prolong the pendency of the charges, and encumber the Court’s docket.

And the record didn’t show a lack of such intent. The defendant’s conduct here certainly imposed an undue burden on the Court’s docket and court personnel, as we had to waste considerable time convening hearing after hearing to get the defendant to finally be straight about the facts, to get the defendant to comply with court orders that were clear as day, and to ensure that the public and that people who come and go from this building every day were safe. Therefore, I’m going to add the two levels, and we are now at a Level 27.

Contrary to the government’s claim that Stone’s lies and threats had no effect on the case, ABJ laid out the risks of the threat and the added time she and court personnel had to expend responding to them.

It is true that ABJ ended up around where Barr wanted Stone’s sentence to end up, but as she explicitly said, she got there the same way she would have for any defendant, but deciding that the sentencing guidelines are too severe. If Barr agreed with that then other people would benefit from Barr’s brief concern about prison sentences.

But Barr is not afraid to lie and claim it did, under oath.

Bill Barr Testifies He’s Unfamiliar with the Obstruction Portion of the... This is Impossible, Part One: Climbing the Mountain