Jason Leopold once again did more for overseeing DOJ than the House Judiciary Committee managed — this time beginning the process of liberating documents held by the US Attorney’s Office pertaining to Roger Stone’s sentencing. As Leopold notes in his story on the documents, this was the first of several installments, so more interesting documents may come out later.

This installment clearly all came from the Maryland US Attorney’s office, reflecting the mailbox of Aaron Zelinsky, who has always been and remains employed there; he returned there full time after he resigned as a Special AUSA assigned to the Mueller team. The remaining installments — at least those from the EOUSA — will likely mirror this production, but also include emails involving Timothy Shea’s Chief of Staff, David Metcalf, JP Cooney, John Crabb, and Alessio Evangelista, who were also involved in the events of February 10 and 11.

Maryland may have responded quickly to this FOIA because it is more sympathetic to Zelinsky’s efforts. Indeed, the most interesting exchanges in these emails show Zelinsky discussing these matters with people in that office. On February 10, he kept Jonathan Lanzner in the loop, letting him know when, “looks like they are blinking.” The following day, just after DOJ disavowed the sentencing memo approved just the night before (which the prosecutors appear to have found out about via media reports), Zelinsky made an urgent request of three others in MD USAO. There was some discussion of precedent and a drafting of a document. But after Zelinsky withdrew from the case, he alerted them that “we will not have the opportunity to do” whatever they were trying to do.

As discussed, I have filed the withdrawal motion and emailed the public corruption chief JP Cooney. I withdrew just after I sent the email below notifying him. As we discussed, I do not believe he has the power to compel  me to stay in the case. There are currently three attorneys on the docket for the United States. In addition, JP has indicated that Main Justice will file a motion of somekind in the case later today and we will not have the opportunity to do this.

Nevertheless, there’s a follow-up with Lenzner later in the day. In it, Zelinsky makes it clear that his Memorandum of Understanding (presumably pertaining to his SAUSA role tied to Mueller) only pertains to Roger Stone.

The suggestion that these events may have affected other cases, to which Zelinsky’s MOU did not apply, is particularly interesting given that DOJ deemed an email to Zelinsky from Erik Prince’s lawyer attaching a story about that investigation, sent after everything started blowing up, to be responsive to this FOIA. 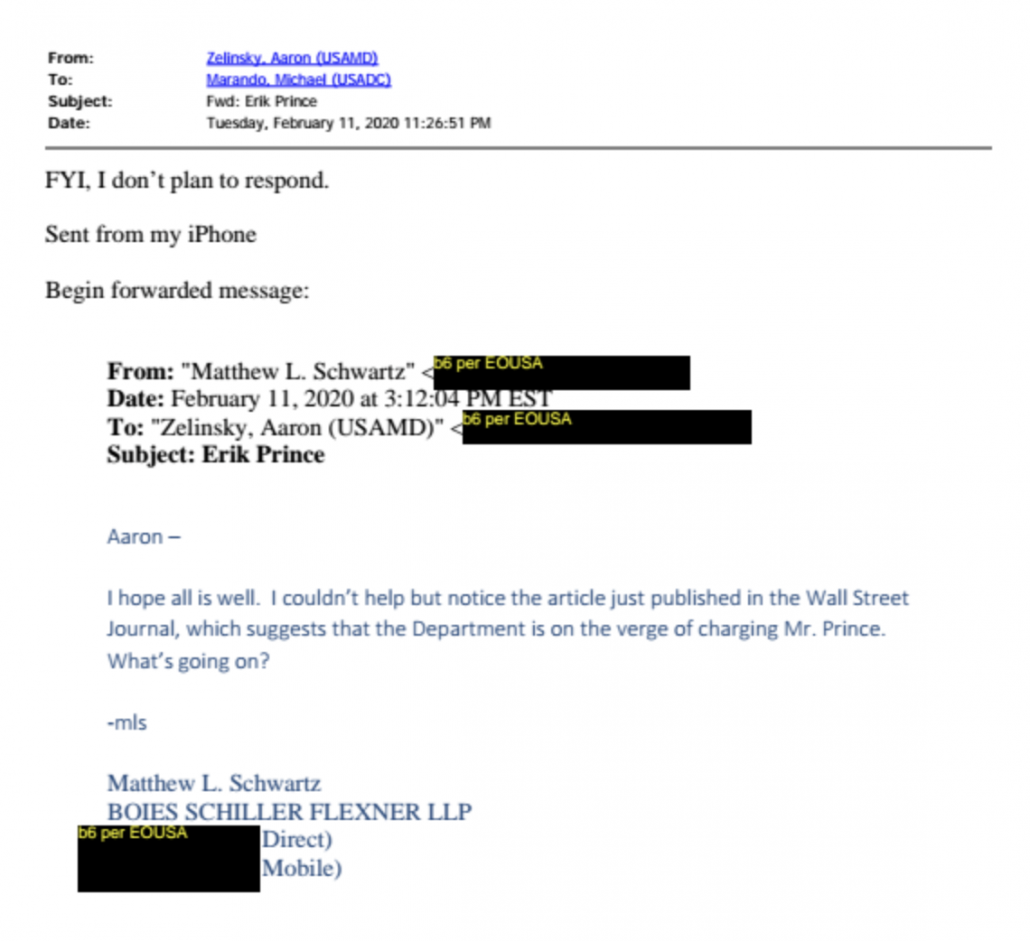 I see no reason why that email would be included in this FOIA response (the attached WSJ story, for example, does not mention the Stone). But for some reason, Maryland’s US Attorney’s office considers it responsive to the Leopold FOIA.

I’ll have more to say about this FOIA response in a bit.

I have included all the emails, save some inquiries from journalists, in the timeline below. Note that it is difficult to distinguish between b5 (deliberative) and b6 (privacy) in these redactions, so I may have gotten a few of those wrong.

7:52: Zelinsky forwards his draft withdrawal motion, still titled, “Zelinsky Withdrawal Motion Draft 2.docx,” to Adam Jed and Jonathan Kravis (but not Michael Marando), stating, “A much slimmer version — let me know what you think.” Note that the email he attached the draft to has a time stamp of 7:46, preceding the one above. This appears to be substantially the motion he submitted the following day.

9:01: A Maryland US Attorney employee, Paul Budlow, responds to Zelinksy regarding a “Presentations Skills for Training and Trial” course in March, saying only “Thanks.” The email was likely responsive because of what Zelinsky said to Budlow on Friday, February 7, which is redacted under b6.

2:04: Zelinsky writes Jonathan Lenzner at Maryland’s US Attorney’s office with the subject line, “Looks like they are blinking.” It is redacted under b5.

2:05: Timothy Shea’s Chief of Staff David Metcalf emails Zelinsky, “If you actually want to talk, let me know.” The rest is redacted under b6.

2:07: Zelinsky responds to Metcalf. The first line is redacted under b6. The email then says, “What would you like to discuss? I am a bit busy because of Stone sentencing memo (as I’m sure you’re aware) and I [redacted, b6].

3:25: Michael Marando emails the other three prosecutors, attaching a “Joint Submission re Redactions.docx,” with the subject link, “Can you let me know if this is OK?”

3:58: Zelinsky responds again to Metcalf, “I’m headed out now. Happy to talk by phone.” The rest of the email is redacted under b6.

4:22: Marando forwards email reading, “Counsel, the attached documents were filed with the Court under seal today.” Marando’s email that forwarded the PACER entry to Stone’s lawyers cc’ing the other prosecutors, which is (still sealed) docket number 278, is included in this FOIA production as well, but the time is not legible.

4:28: Zelinsky responds to Kravis, “This says [redacted] got thirteen months. I thought it was 14?

4:32: Zelinsky responds to Marando, “Thanks for doing this.”

6:02: Zelinsky receives ECF notice of the prosecutors’ sentencing memo, which was filed at 6:01.

6:07: Cooney emails “Team,” stating, “I just let Jonathan know that you have the green light to file the pleading.” The rest of the email is redacted under a b6.

7:04: Zelinsky responds to Cooney thanking him. The rest of the email is redacted under b6.

7:03 AM: Zelinsky forwards the sentencing memo from Stone’s attorneys, including the leniency letters, to the other prosecutors in the case, making some comment that was redacted for b5 and b6 reasons.

7:04 AM: Zelinsky responds to the Cooney email from the evening stating, “Thanks JP,” with the balance redacted for b6. 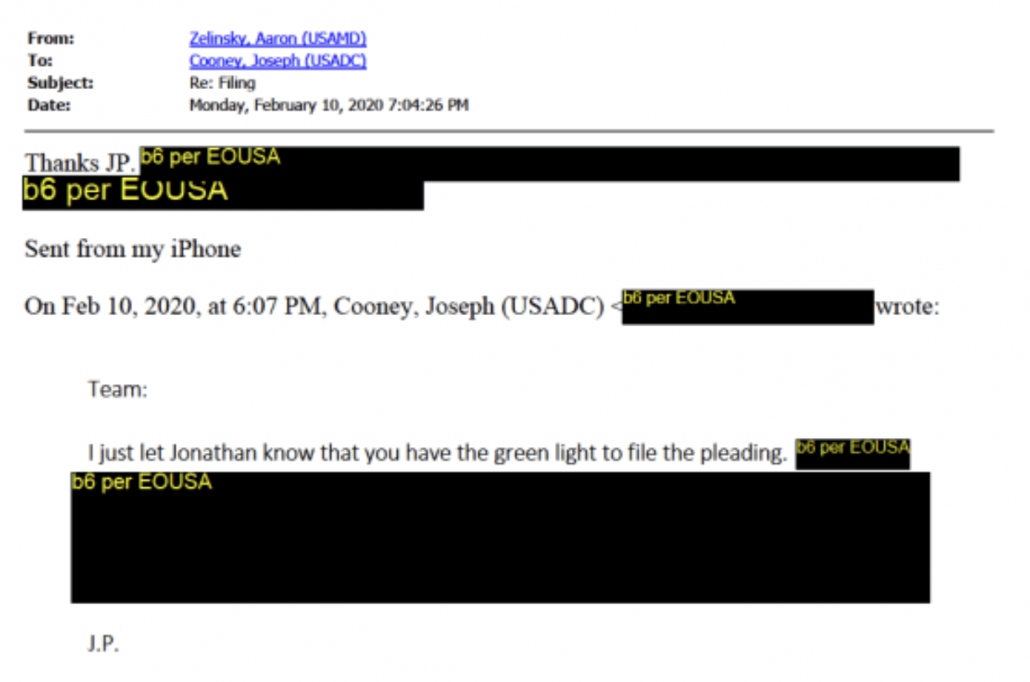 8:32: Adam Jed writes the other Stone prosecutors with the subject line, “Stone’s sentencing memo.” The content is redacted under b5.

9:50: Zelinsky responds to the other prosecutors regarding an email all four plus Timothy Shea got sent, calling them “Corrupt Whores” and “Are Poor FuckingEvil,” complaining they called for “7 to 9 years for Rodger [sic] Stone?” and calling them, “COCKROACHES.” Apparently this email merited a response, because he said,

I’ll draft a response. Good news– we know the U.S. Attorney won’t get this threat because he doesn’t use email.

12:02: Marando forwards an inquiry from The Hill’s John Kruzel, asking about the Fox story that DOJ is changing Stone’s sentencing recommendation, to Cooney, saying only “FYI.”

DOJ on Roger Stone: “This is not what had been briefed to the department,” the official told CNN. “The department believes the recommendation is extreme and excessive and is grossly disproportionate to Stone’s offenses.”

Sorry to buy you with an urgent request.

[long paragraph redacted under b5]

1:00: White responds. The first line is redacted under b5. The rest reads,

Jon briefed me about this earlier today. I tried calling you and I am happy to chat this afternoon. I can be reached at [redacted].

1:04: Zelinsky responds to White, cc’ing Roann Nichols, “Neil — on phone with DC now. Will call in a moment.”

1:55: Cooney sends an email, with only two periods, to Kravis, with the subject “memo.”

2:02: Kravis forwards the email from Cooney to the other prosecutors.

2:34: Zelinsky receives ECF notice of a letter in support of sentencing.

2:55: Kravis sends Zelinsky an email with the subject line, “Send me your notice?”

2:55:18: Zelinsky responds to Kravis. The first sentence is redacted under b5. The rest says, “JP approved this yesterday. If you see any typos, let me know!” He attaches, “Zelinsky Withdrawal Motion Draft February 11.docx.”

2:59: Zelinsky receives ECF notice of his withdrawal motion, which was filed at 2:58.

Pursuant to our conversation yesterday and your approval of this filing yesterday, I am now filing the attached withdrawal from the Stone case and resigning as a SAUSA in DC.

3:00: Cooney responds to Zelinsky, “I am not approving of you withdrawing from this case right now.”

As discussed, I have filed the withdrawal motion and emailed the public corruption chief JP Cooney. I withdrew just after I sent the email below notifying him. As we discussed, I do not believe he has the power to compel  me to stay in the case. There are currently three attorneys on the docket for the United States. In addition, JP has indicated that Main Justice will file a motion of somekind in the case later today and we will not have the opportunity to do this.

Thanks for all yoru [sic] help.

3:04: Leo Wise responds to Zelinsky, explaining, Attached is a rough redlined draft. Also attached is the case [redacted] is also attached. The subject of the email and the names of the attachment are also redacted. 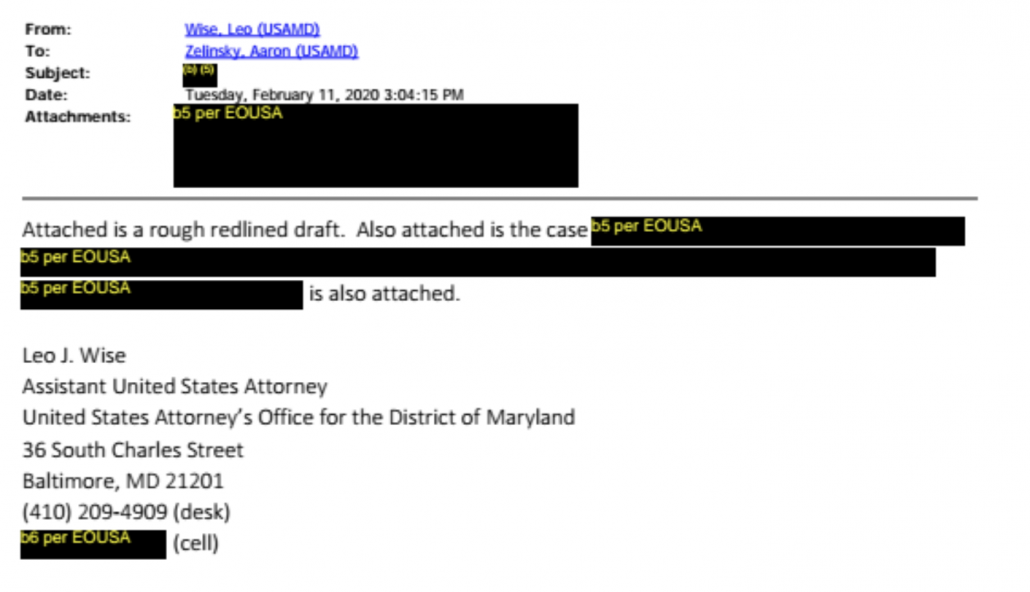 3:30: News Alerts from Law360 that includes reference to the sentencing memo filed the day before.

3:41: Steven Brill writes the Stone prosecutors urging them to “speak out against improper internal pressure.”

3:55: Zelinsky receives Kravis’ withdrawal motion from ECF; it was filed at 3:54.

4:04: Zelinsky forwards an email from NBC’s Kevin Breuninger asking for a statement on his withdrawal to the press people in Maryland’s US Attorney’s office, telling them, “I’m just going to forward these to you. THanks! Sorry!” Other standard emails he forwarding included one from The Hill, CNN (Katelyn Polantz), CBS, CNN (Wolf Blitzer).

4:04: Zelinsky forwards an email from Reuters’ Brad Heath, with the subject line 44.5, asking if the notice of withdrawal was his own decision; Zelinsky forwarded it to the press people in Maryland’s US Attorney’s office

4:38: Zelinsky receives ECF notice that John Crabb filed an appearance in the case

4:46: Zelinsky receives ECF notice of the revised sentencing memo, which was filed at 4:44

5:01: Marcia Murphy, one of the press people in MD USA, responds Zelinsky regarding an email he forwarded from CNN explaining,

I have responded to all the inquiries you forwarded with something similar to the below statement. I tried to make it clear that I was responding on your behalf, so they wouldn’t think the office was preventing you from making a statement. If you get anymore, I will be happy to respond. Have a good evening. Hope you get some rest! Marcy

5:32: Zelinsky receives Marando’s notice of withdrawal from ECF; it was filed at 5:30.

7:08: Michael Cunningham, in the Maryland US Attorney’s Office, emails the NYT story on the Stone prosecutors withdrawing to Zelinsky, saying, “Very proud of you!”

9:10: Zelinsky responds to Cunningham: “Thanks! Just doing what any of us would have done in the circumstance.”

10:03: Lenzner responds to the Nichols and White email. His response is redacted under b5.

10:21: Zelinsky responds to Lenzner, starting, “Thanks. My MOU is certainly only for the Stone case.” The rest is redacted under b5.

10:36: Zelinsky responds to a thread involving Stuart Sears about a panel on Political Prosecutions involving, among others, Jeannie Rhee (the panel would later get delayed until September). The first part is redacted under b5. It finishes, “Thanks for the kind invitation.”

I hope all is well. I couldn’t help but notice the article just published in the Wall Street Journal, which suggests that the Department is on the verge of charging Mr. Prince. What’s going on?