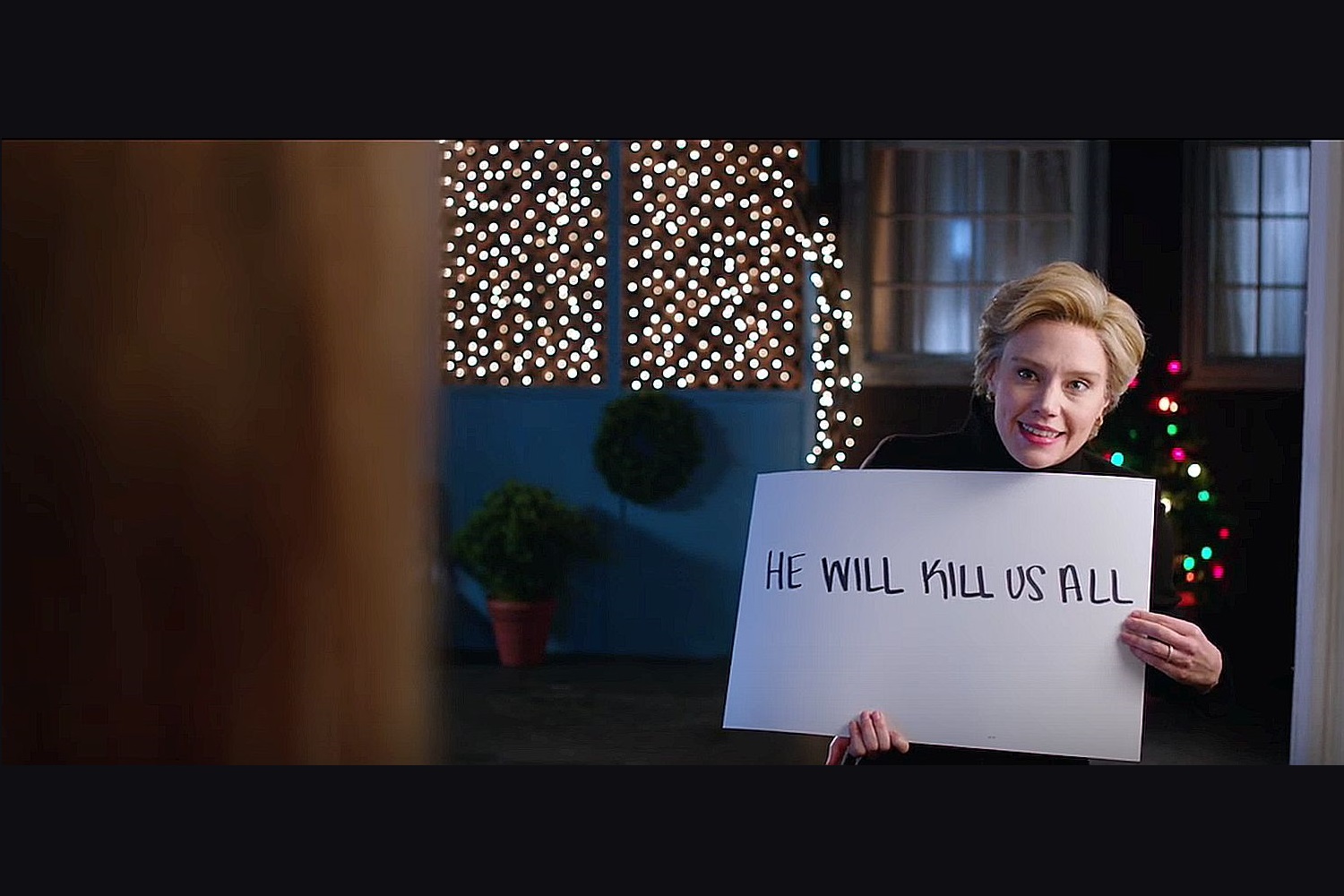 By now most folks who pay attention to the intersection of politics and COVID-19 news have heard about Axios’ Jonathan Swan’s interview with Trump.

This is, in my opinion, the key few seconds at 7:25 minutes into the interview:

Trump just doesn’t give a damn about a thousand Americans dying each day or the total number of COVID-19 deaths to date.

As if this wholly preventable mass death event was inevitable.

As if he was powerless to stop it after being warned in November 2019 there was a risk of pandemic due to an unknown pathogen in China.

As if he was powerless to stop it after the risk was communicated in the Presidential Daily Briefing in early January, after Chinese media published stories about an unknown pneumonia-like illness.

As if he was powerless to recover and relaunch the pandemic response team he disbanded in May 2018 after the first case of COVID-19 was identified in the U.S. on January 21.

As if he was powerless to invoke the Defense Production Act to increase production of personal protection equipment and ventilators in the U.S. at any time from January to mid-March to get ahead of the surge in cases he failed to stop.

As if he was powerless to expedite production under the DPA instead doing nothing for months as production floundered and the Federal Emergency Management Agency stole PPE from health care providers for the national stockpile.

Every step along the way Trump failed to do what was necessary to save American lives.

He repeatedly throttled the experts, preventing them from communicating openly what the public needed to know.

He shared bullshit happy talk — it’ll be down to zero, it’ll soon disappear, he said.

He shared dangerously erroneous medical information — like hydroxychloroquine is safe and bleach will kill the virus.

He harassed and harangued blue state governors like “that woman in Michigan” when they had the audacity to demand more from the federal government to deal with COVID-19.

He ignored the threats to these same governors from armed protesters who didn’t want to change their habits to mitigate COVID-19’s spread.

He undermined any and all messaging intended to encourage the public to act responsibly to reduce COVID-19 cases.

Because the entire point has been this non-choice, the no-plan, the void strategy.

Because no choice, no plan, no strategy is a plan. Its outcome is death.

There is no choice on Trump’s part to do anything except play golf.

There is no plan to do anything because Trump is fine with the current outcomes.

There is no strategy because that would interfere with the outcomes.

There is only death, death, and more death.

Unless you’re a Trump supporter. Then you would have received an email which said “wearing masks is patriotic.” 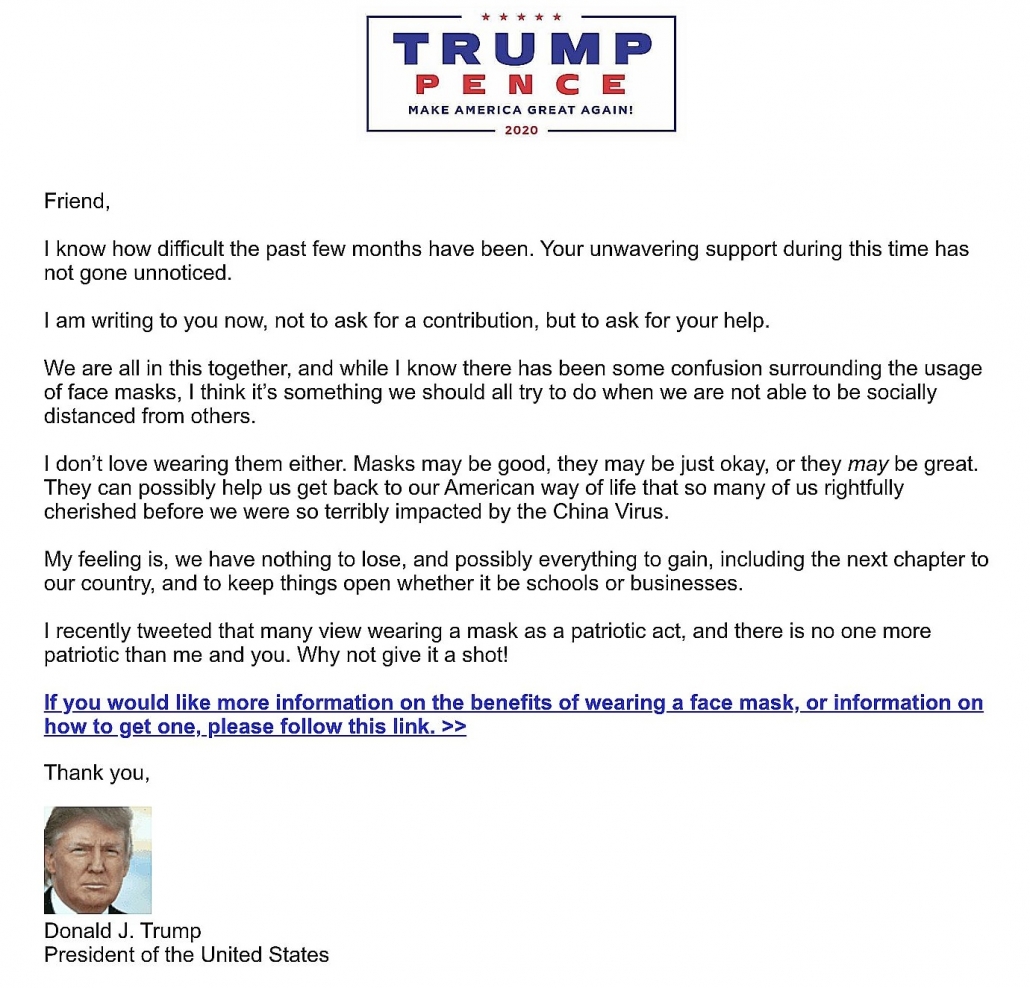 And if you’re a Floridian with whom Trump identifies because of his residency and his businesses, you would have read this tweet 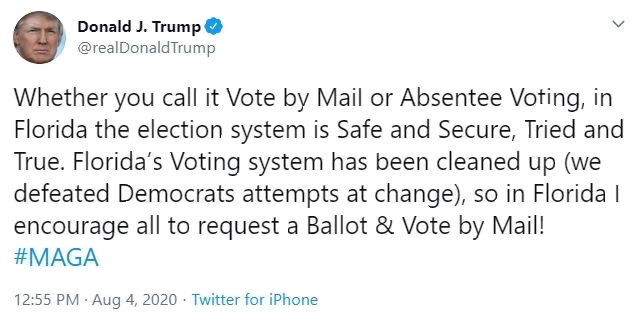 For you exceptions Trump will exert himself because you represent something he needs, whether your vote or your campaign contribution or the narcissistic supply you’ll provide him.

Not so lucky you if you’re a Nevadan because your state only has a tenth of the population of Florida, only six electoral college votes compared to Florida’s 29, only ~280,000 residents age 60 or older, and too many brown people who vote Democratic. Nope, you will not be encouraged to wear masks and voting by mail will be strongly discouraged.

And now Trump has denied that COVID-19 can be transmitted to, sicken, and even kill children. Fortunately social media platforms are beginning to wise up:

For the first time, both Facebook and Twitter acted to remove content shared by the campaign to re-elect President Donald Trump from their platforms, citing policies against spreading false claims about COVID-19.

Both the @TeamTrump campaign Twitter account and the official Donald Trump Facebook account shared a video late yesterday in which Trump claimed children are immune from the novel coronavirus. The video was a clip from an interview in which the president spoke by phone with Fox & Friends hosts about schools reopening this fall. “My view is that schools should be open,” Trump said. “If you look at children, children are almost—and I would almost say definitely—but almost immune from this disease. So few, they’ve got stronger, hard to believe, I don’t know how you feel about it, but they have much stronger immune systems than we do somehow for this. They don’t have a problem. They just don’t have a problem. They are virtually immune from this problem.”

COVID-19 may not result in many hospitalizations among children, but we simply do not know how the disease affects them and if the results are long term or permanent. Unlike adult cases there hasn’t been an adequate number of postmortem examinations of children who died of COVID-19, let alone comprehensive follow-up studies given the relative recency of the pandemic.

It’s grossly irresponsible to say children are immune when they do get infected, can become sick, and do spread the virus. From the American Academy of Pediatrics’ Children and COVID-19: State-Level Data Report:

Unless that’s the point: He will do the opposite of the right thing.

By actively choosing gross negligence and malfeasance, Trump will ensure not only that American adults continue to sicken and die from COVID-19 but that children will also be increasingly exposed because it’s not the right thing.

He’s going to kill us all.

In Previously Undisclosed December 2018 Interview, Jared Kushner Got Warned... DOJ’s Accounting of Its FISA Errors Cannot Be Compared to the Carter Page...