GOP Senate Walked Out of DC for a Reason: Voter Foreclosure, 2020 Edition [UPDATE-1]

[NB: Check the byline, thanks!  Updates at bottom of post. /~Rayne]

Come on, media. You’re still screwing up coverage of BOTH the pandemic economy and the general election.

The bothsides-ism the media clings to so desperately as a norm does not work when one party consistently makes bad choices, or no choices with the same effect as bad choices. There is no bothsides when one side acts in bad faith.

Think about it: making no choice is a choice. Taking no action is a choice. The outcome from no-choice/no-action can be very bad; making no decision to rescue a drowning person yields the victim’s death.

In the case of the stimulus and aid bill, it’s NOT the Democrats in Congress who are the impediment. Stop portraying that way.

House Democrats *passed a bill* in May. Republicans refused to do anything til last week and have yet to propose anything that can get 50 votes in the Senate, which they control. https://t.co/S9mkUpxwbB

Start digging into the why behind the White House and the GOP senators resistance to the economic aid in the bill — money which would be plowed back into the economy and ultimately into their donors’ pockets as profits.

Sen. Elizabeth Warren has a bead on one reason: a portion of the investor class wants real estate values to crash so they can sweep in and buy distressed properties.

… The Wall Street Journal recently reported that investors are “preparing for what they believe could be a once-in-a generation opportunity to buy distressed real-estate assets at bargain prices.” This profiteering is far from “once-in-a-generation” though: It’s straight out of private equity’s playbook during the 2008 financial crisis. We all know what happened then: Homeowners targeted by predatory mortgages lost their homes to foreclosure, and private equity swept in to buy those homes at depressed prices. Communities of color were hit fastest and hardest. Just a handful of years after Black homeownership hit its highest point, the devastating waves of foreclosures wiped out nearly all of the growth in Black homeownership since the Fair Housing Act repealed Jim Crow redlining in 1968. …

“Once-in-a generation opportunity”? Meaning an even more dramatic plummet of property values compared to the 2008 crash a dozen years ago?

We can see the crash coming with an impending 30-40 million Americans on the verge of eviction but neither the White House nor the GOP senate feel a sense of urgency. This is NOT bothsides but one, and one which is and has been comfortable with vulture capitalism.

One side led by a man who claimed to be a billionaire based in no small part on his real estate development business.

This no-choice/no-action is intended to both evict roughly 12% of Americans from their homes, forcing their relocation or homelessness, while a small segment of the investor class reaps benefits.

The rest of the investor class which relies on stability in order for consumption to remain constant or increase won’t benefit. Their values will drop off as they did in 2008 during the crash.

Why are the White House and the GOP senate proceeding as if it doesn’t matter if they come to an agreement on the aid and economic stimulus package?

We’ve seen this before, though; the difference was that the crash hadn’t yet been fully set in motion as it is this time with the pandemic.

In 2008 with an evenly split Senate, the 110th Congress faffed around from June to early September, happy with irrationally high oil price which were hurting consumers badly while paying inadequate attention to investment banking and credit markets. Congress threw crappy legislation at the problem of subprime mortgages while the financial sector floundered.

When consumers had to choose between paying for gasoline to get to work or paying their crappy adjustable rate mortgage, they paid for the former rather than the latter hoping to catch up on the latter at a later date. But for many consumers there wasn’t a later date — they were foreclosed upon and evicted.

The Housing and Economic Recovery Act of 2008 passed in late July 2008 did far too little, far too late, and for the wrong end of the economic food chain.

Congress should have learned from this experience. Some of the GOP senators were in office when the 2008 crash happened. They know better.

In September 2008 as the crash loomed days away, a GOP county party chairman in Michigan admitted to a reporter that the GOP was going to use a list of foreclosed homes and addresses to “make sure people aren’t voting from those addresses.”

At the time the Department of Justice’s Civil Rights Division told Congress it would monitor for the use of foreclosure records to contest voters’ ballots though it wouldn’t dispatch DOJ personnel to the polls.

But everything is different under the Trump administration. The GOP may try to use foreclosure records this election because they may be able to get away with it after setting a foreclosure crisis in motion.

A Trump appointee may be the U.S. attorney for each state most at risk — they may be more loyal to Trump and the GOP than to the law.

A Trump appointee may be the judge overseeing any case brought to them about voter foreclosure.

And the GOP is desperate, more so than it was in 2008 because both the White House and the Senate are now at risk if a blue wave sweeps them as a rejection of Trump and his policies.

They’re planning ahead for something, because the GOP has amassed a $20 million legal fund for the election. For what do they need such a big legal fee kitty?

It’s right there in their selection of no-choice/no-action toward economic aid and stimulus.

The entire GOP, from Trump on through the GOP congressional caucus, want to foreclose on Americans’ homes and then their votes.

If the media was to stop bothsides-ing their reporting, was to stop treating the GOP’s bad faith as if it were legitimate, the GOP might reverse its position.

For some Americans it’s already too late. They are already behind on rent or mortgage payments, and/or their household isn’t getting enough to eat. Innocent children are suffering for this. Their parents feel compelled to send them to schools which can’t handle COVID-19 conditions because it may mean a meal for their kids they might not get at home.

But the GOP continues to walk away from doing what it takes to ensure American families get the care they need, let alone that the public is able to safely ride out the time between now and an effective vaccine while socially distanced and masked.

The GOP senate caucus has chosen since May to load up their bill with funding for military equipment the public can’t eat or use to pay their mortgage, and let protections against evictions expire without replacement.

The reason is evident in the results, and the media needs to do a better job of holding the one party accountable for them.

Why isn’t there protection against evictions?

Because the GOP — from White House to the Senate — wants evictions and foreclosures.

Why isn’t there financial aid for Americans who have lost their jobs, are behind on their rent, need food?

Because the GOP wants these particular Americans to suffer enough that they are disenfranchised.

Why doesn’t the GOP save the person from drowning?

In the absence of acting to reach for their hand and pull them from the water, we can only assume it’s because the GOP wants the flailing victim dead.

The media needs to stop bothsides journalism and get the GOP on the record. Ask them why they are clinging to funding military spending instead of financial and food aid, why the GOP isn’t preventing evictions and foreclosures with a moratorium.

Ask the GOP whether they are going to attempt to foreclose on voters to save Trump’s ass this November.

Three lies in three minutes. The lie about COVID-19 was bad enough on a day when over 1200 Americans died of the disease. The other two lies though…the GOP senate hadn’t budged yesterday. These two issues, both unemployment benefits and an eviction moratorium, can’t be resolved with an executive order which he doesn’t even claim he’ll try to use. 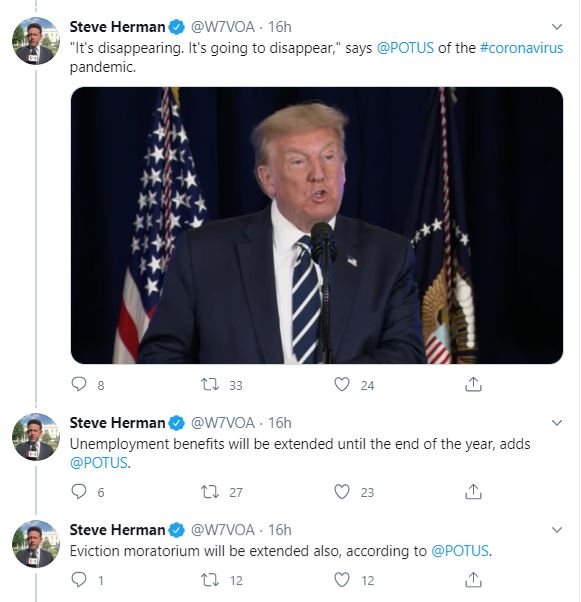 Call it what it is: gaslighting the American public.

I don’t know why his Bedminster course members are willing to pay hundreds of thousands for memberships so they can be gaslighted in person, but rich people do all kinds of stupid shit.

DOJ’s Accounting of Its FISA Errors Cannot Be Compared to the Carter Page... Social Security And Other Entitlements