Work In Progress: Saving the USPS 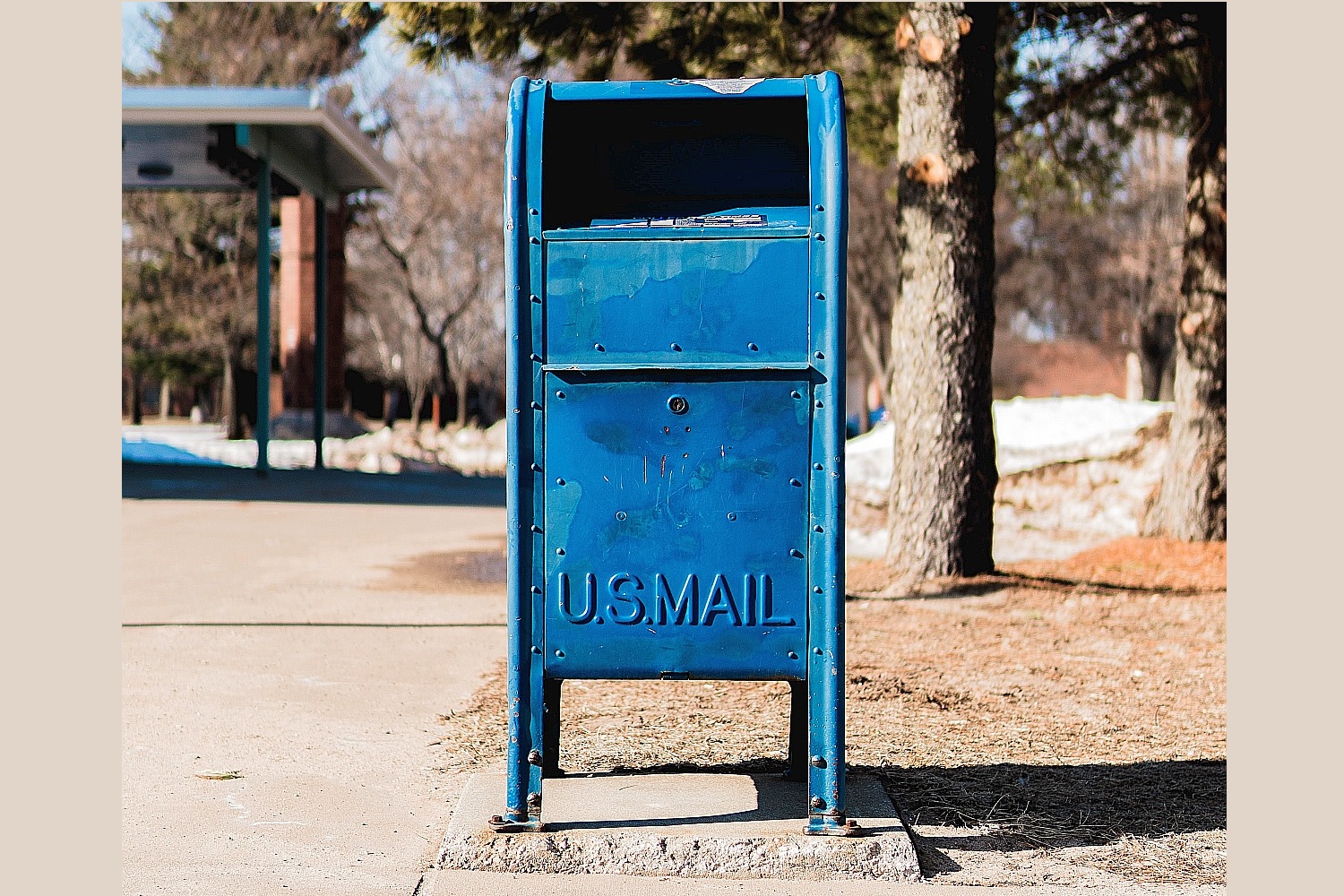 Before we look at current status, I want to make a point about what Louis DeJoy has done to the U.S. Postal Service. I hope that members of Congress or their staff members stopping in here pay close attention to this point.

VICE had obtained a presentation outlining an “Equipment Reduction” dated May 15, 2020, one week after he was sworn in as CEO and Postmaster General. 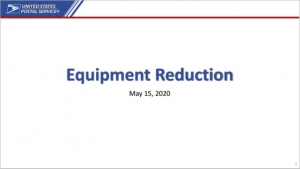 This plan to reduce equipment — and the services the equipment provided — wasn’t whipped up in one week. It had to have been studied and created well before May 15.

Imagine for a moment you are an operations manger in one of a collection of high-output manufacturing plants across the U.S.. Your new boss comes in and says he wants to eliminate as much as 50% of your production capacity. How long would it take you and your co-workers in production engineering to identify the equipment which will least affect your production capability under peak demand?

Would it take you a week? Doubtful.

Would it take only a week for hundreds of plants across the country to do this same study and advise which equipment could be removed to eliminate any excess expense and yet provide reasonably reliable service?

Would it take only a week to prepare a finished presentation of a nationwide study with a proposed equipment reduction given the wide range of facilities across the country and operations managers?

DeJoy is executing a plan which had been in the works for some time intended to hollow out the U.S. Postal Service.

Let’s call this a conspiracy because you know damned well DeJoy didn’t do this all by himself given his postal service-free background. The public needs to know when this started and who was in on the planning.

Now, let’s optimistically assume the USPS continues to operate the way it has in the past to ensure customers continue to seek its services over commercial competitors like FedEx and UPS. You’ve gotten post card-like mailers and other kinds of promotional materials informing USPS customers about their services, rates, and changes to either. 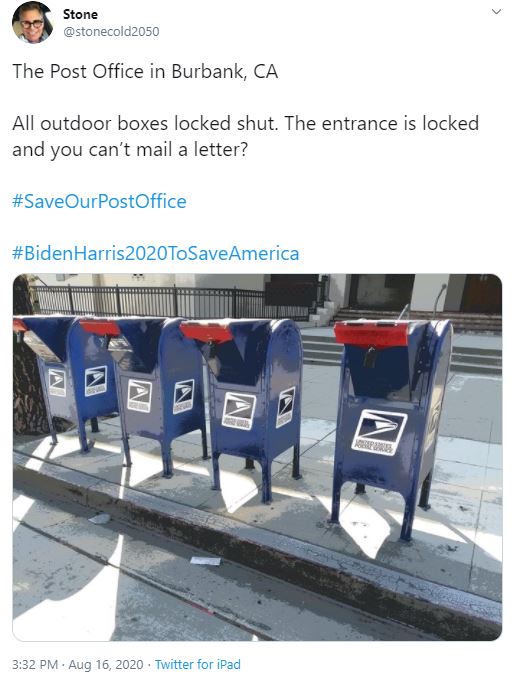 Have any Americans anywhere in the U.S. received advance notification that their USPS service would be slowed down so they could adjust their mailing practices?

Have any Americans received notification that any familiar blue mailboxes near them would be removed or locked?

Have any Americans received advice on how they should adjust their mailing practices based on the changes to the USPS system closest to them?

No. Nada. Not one advisory or promotional mailer or brochure has shown up on line. Not even Trump supporters are sharing them.

DeJoy is NOT improving service if he’s allowing customers to fly blind about the changes to USPS. He is NOT making any effort to win over or retain USPS customers, which should be the first rule in trying to make profits — not pissing off the customer base.

This restructuring and reduction of equipment is intentional and malicious, executed with no outreach to customers whether individuals or businesses.

We’d heard reports that sorting machines had been tossed in dumpsters. We haven’t see photos turn up yet but we’ve now seen images of purported sorting machines sitting outside USPS facilities inside a fence, like so:

These machines will likely not work properly without considerable assessment now that they have been sitting out in the elements. Some parts may corrode and seize if exposed to high humidity, rain, and salt at any USPS facilities near oceanfront.

They were not stripped down for parts and put in an inventory for repair of similar equipment still on the floor.

They were not stored inside sub-optimized USPS facilities or warehouses to protect them from the elements.

They were not inventoried and submitted to an auction house for resale as scrap to recover value for taxpayers, in spite of the plan/conspiracy having enough time to identify how many/which machines would be pulled from USPS facilities before mid-May.

It’s not clear that some equipment or parts haven’t been stolen, either.

These machines which are taxpayers’ assets have been maliciously destroyed.

DeJoy is NOT reducing expenses and recovering costs to the USPS under some stupid notion of making a profit which no other government entity is required to do.

A lot of our community members reached out to their members of Congress and to the USPS Board of Governors to protest DeJoy’s destruction of the USPS.

The House and Senate Dems have been working on this as well as state officials.

House Speaker Nancy Pelosi notified House members Sunday they should return to session to work on this crisis:

The Postal Service is a pillar of our democracy, enshrined in the Constitution and essential for providing critical services: delivering prescriptions, Social Security benefits, paychecks, tax returns and absentee ballots to millions of Americans, including in our most remote communities.

Alarmingly, across the nation, we see the devastating effects of the President’s campaign to sabotage the election by manipulating the Postal Service to disenfranchise voters. Postmaster General Louis DeJoy, one of the top Trump mega-donors, has proven a complicit crony as he continues to push forward sweeping new operational changes that degrade postal service, delay the mail, and – according to the Postal Service itself – threaten to deny the ability of eligible Americans to cast their votes through the mail in the upcoming elections in a timely fashion. These delays also threaten the health and economic security of the American people by delaying delivery of life-saving medicines and payments. In 2019, 1.2 billion prescriptions were delivered through the Postal Services, including almost 100 percent from the VA to veterans.

Lives, livelihoods and the life of our American Democracy are under threat from the President.

That is why I am calling upon the House to return to session later this week to vote on Oversight and Reform Committee Chairwoman Maloney’s “Delivering for America Act,” which prohibits the Postal Service from implementing any changes to operations or level of service it had in place on January 1, 2020. House Democratic Leader Hoyer will soon be announcing the legislative schedule for the coming week.

To save the Postal Service, I am also calling upon Members to participate in a Day of Action on Tuesday by appearing at a Post Office in their districts for a press event. In a time of a pandemic, the Postal Service is Election Central. Americans should not have to choose between their health and their vote.

As we protect the Postal Service and access to the ballot, we continue to lead the fight for The Heroes Act as the coronavirus crisis continues to spiral further out of control.

I am grateful to Members for their enthusiasm about returning to Washington, and I am grateful for their suggestions for what else we may consider acting upon when we return.

Thank you for your enthusiasm, leadership and friendship.

One might wonder if the protesters which have gathered outside his golf side mansion have influenced his decision.

According to Maloney’s office:

The Delivering for America Act would prohibit the Postal Service from implementing any changes to the operations or level of service it had in place on January 1, 2020, until the COVID-19 pandemic has ended. This legislation would maintain current service standards as well as the integrity of our elections and bedrock democratic principles.

It’s likely too late to reverse the all the changes made to the USPS sorting system though some changes like pulling the blue mailboxes or locking them could be returned to their previous condition.

The real challenge ahead: forcing the Senate Majority Leader to allow this bill to go through the Senate, and finding enough GOP votes to pass the bill with a veto-proof majority.

The GOP needs to prove it isn’t trying to kill more Americans by squashing this bill. Too many voters have already been at risk of serious harm because their medications haven’t arrived by mail on time.

This is yet one more clue to DeJoy’s intentions driving the changes to the USPS: he made no obvious effort to mitigate threats to Americans’ health and security before he made any changes.

Finally, I have to tell you I have had it up to fucking here ~slashing gesture below chin~ with the left-wing whining  DO SOMETHING.

Stop the god damned whining or go sit in the time-out chair until you’ve decided you can do something constructive yourself.

There’s a lot to be done which isn’t the responsibility of members of Congress who are already doing what they are supposed to do (which, by the way, includes meeting constituents as well as asking for their votes in the now-shortened break time they have before Election Day).

The whining is a serious problem in itself because it discourages voters at a time when they are already feeling down because of Team Trump’s unrelenting attacks on democracy combined with the pressure of the ongoing pandemic.

Encourage others to do what they can to push back. At a minimum, take the time to educate yourself and help friends and family do likewise about options to vote.

Look into early voting. Look into dates to obtain absentee/mail-in ballots and how to turn them into clerk’s drop boxes if mail is not an option. Or make a plan to vote in person. Begin by checking your voter registration status.

Check with your state’s secretary of state and attorney general to see if they are taking action to halt the changes or develop alternatives to support voters. Some states’ attorneys general are preparing to file suit against DeJoy and the USPS.

Need more guidance? Celeste P. has a deep Twitter thread of actions people can take to save the USPS, including pressure on the GOP senate to pass the HEROES Act economic aid bill which includes funding for the USPS.

This is a government of, by, and for the people. We are the people we have been waiting for to fix this mess.

Let’s get it in gear and go.

“These Actions Have Targeted Not Only against Russia, But Also Against... Trump Tried to Claim Privilege Over a Document Flynn Claimed to Not Remembe...