One thing the Senate Intelligence Committee Report on Russia does is confirm there’s a continuity between the efforts to carve up Ukraine pitched to Paul Manafort on August 2, 2016 — at a meeting where he also discussed how he would win Michigan — and the propaganda efforts implicating Ukraine that got the President impeached.

The report has a forty page section describing “Manafort’s Activities After the Election.”

The narrative starts with Kilimnik attempting to leverage his ties to Manafort (in part exploiting Sam Patten). It then describes some of the events described in the Mueller Report: the December 8, 2016 foldered email, a heavily redacted description of his meeting in Madrid with Georgiy Oganov, Konstantin Kilimnik’s trip to the inauguration where he had a meeting with Manafort he kept secret from Patten, a second meeting in Madrid — this time with Kilimnik — where they discussed how to undermine the narrative about Russia.

Then it takes a seeming deviation, spending sixteen pages describing Russia’s efforts — significantly led by Kilimnik — to undermine investigations into Russian interference. Much of this is unredacted. But a section describing Kilimnik’s follow-up contact with US Government officials and including descriptions of John Solomon’s propaganda is heavily redacted. 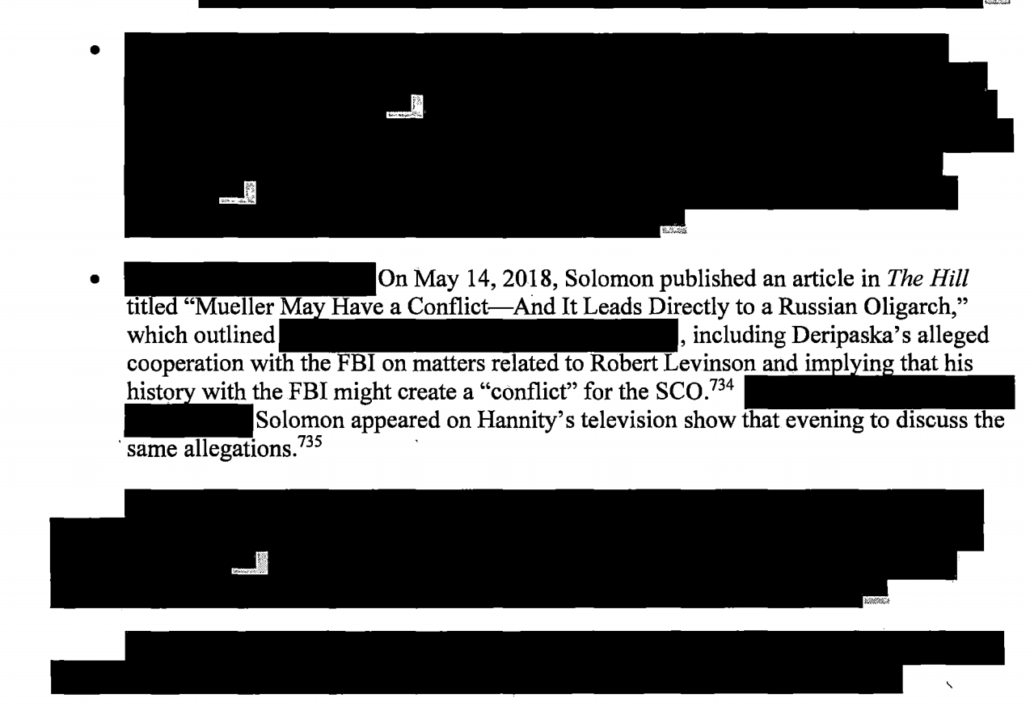 Then the narrative returns to Manafort and Kilimnik’s joint efforts to carve up Ukraine for Russia. The SSCI Report introduces an eight page section — which is almost entirely redacted save two mentions of Andrii Telizhenko’s role in the effort — by describing Kilimnik’s parallel efforts to blame Ukraine for the 2016 interference and to bring back Yanukovych.

Kilimnik, however, continued efforts to reestablish Yanukovych as part of a peace settlement. Kilimnik worked with associates inside Russia, Ukraine, and elsewhere to affect U.S. perceptions of the conflict in Ukraine. These plans blended Kilimnik’s efforts to bring about Yanukovych’s return-including his exoneration related to the violence in the Maydan in February 2014—with the aforementioned themes promoting the narrative that Ukraine, not Russia, had interfered in the 2016 U.S. elections .

The inclusion of Telizhenko and Solomon in this discussion — right in the middle of a long discussion of Manafort’s ties to Kilimnik — definitively tie the events leading up to impeachment and Ron Johnson’s current efforts to spew Russian disinformation to Manafort’s efforts with Kilimnik.

This is part of a section that Ron Wyden complained, in his separate views on the report, was overly classified.

(U) Unfortunately, significant aspects of this story remain hidden from the American public. Information related to Manafort’s interactions with Kilimnik, particularly in April 2016, are the subject of extensive redactions. Evidence connecting Kilimnik to the GRU’s hack-and- . . leak operations are likewise redacted, as are indications of Manafort’s own connections to those operations. There are redactions to important new information with regard to Manafort’s meeting in Madrid with a representative of Oleg Deripaska. The report also includes extensive information on Deripaska, a proxy for Russian intelligence and an associate of Manafort. Unfortunately, much of that information is redacted as well.

(U) The report is of urgent concern to the American people, in part due to its relevance to the 2020 election and Russia’s ongoing influence activities. The public version of the report details how Kilimnik disseminated propaganda claiming Ukrainian interference in the 2016 election, beginning even before that election and continuing into late 2019. [redacted sentence] And the report includes information on the role of other Russian government proxies and personas in spreading false narratives about Ukrainian interference in the U.S. election. This propaganda, pushed by a Russian intelligence officer and other Russian proxies, was the basis on which Donald Trump sought to extort the current government of Ukraine into providing assistance to his reelection efforts and was at the center of Trump’s impeachment and Senate trial. That is one of the reasons why the extensive redactions in this section of the report are so deeply problematic. Only when the American people are informed about the role of an adversary in concocting and disseminating disinformation can they make democratic choices free of foreign interference.

(U) As the Committee stressed .in Volume 3 of its investigation, the public must be informed as soon as possible about ongoing foreign influence campaigns. The American people are not served by aggressive redactions to a narrative describing the continuity of Russian interference before and after the 2016 election. The American people also deserve better than a double standard in which information related to Russian interference in U.S. elections remains heavily redacted while information that might cast doubton investigations into that interference is released wholesale.

After a short description of Manafort’s discussions of the investigations with Rick Gates, the Report begins an entirely new, thirty-some page section detailing Manafort’s ties — through Deripaska — to Russian intelligence, specifically GRU. That’s another section that Wyden complained was overly redacted.

I’m not aware of any place where the Report describes a document, seemingly titled with the date, August 27, 2018 (but with a last modification date of May 15, 2018), describing “Info.” 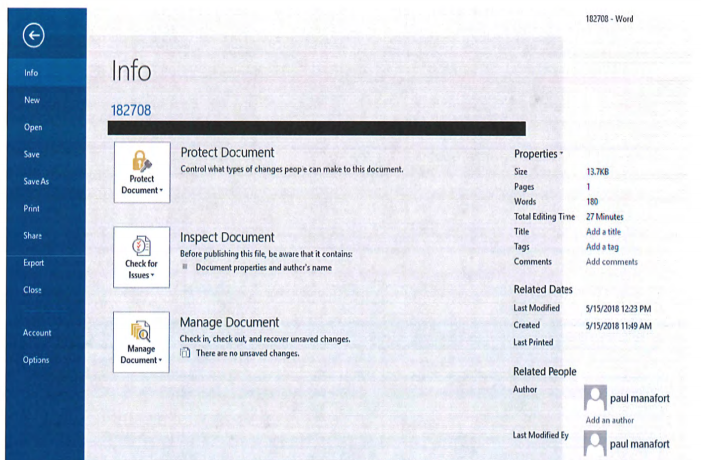 The document was revealed as part of Manafort’s breach determination Judge Amy Berman Jackson has been mulling how much of this to unseal for over a month.

In any case, Paula Manafort and Konstantin Kilimnik appear to have been planning something for August 27, 2018.

Which is interesting, given something disclosed in the last two Mueller FOIA releases. On August 21, 2018, Marshals at the Alexandria jail informed the Sheriff that a laptop provided to Paul Manafort for legal review had had its administrative password changed. That same day, per the Sheriff’s office, someone brought Manafort two USB drives. One — marked “Blank” — had a bunch of hidden files in its trash folder.

The day a jury found Manafort guilty of his VA crimes, someone helped sneak files to Manafort. That also happens to be just a week before whatever event Manafort had been planning back in May was scheduled.

And for some reason, even though they learned he was still conspiring from jail, Mueller’s team went ahead and signed a cooperation agreement with the guy.

And yet, after multiple instances where Manafort’s jailers discovered he was communicating covertly from prison, Bill Barr’s DOJ used COVID as an excuse to release him from a prison with no COVID cases, and put him in home confinement. It’s not just that Billy Barr has made sure that Manafort won’t face his full punishment for money laundering and cheating on his taxes. It’s that Barr has made it easier for a guy with abundant ties to Russian intelligence to continue communicating with Russian intelligence.

There’s one other detail in the SSCI Report that makes all of this much more interesting: Just before Manafort snuck off to meet with Kilimnik on August 2, 2016 to share his campaign strategy and discuss carving up Ukraine to Russia’s liking, Manafort had a meeting at Trump Tower with Rudy Giuliani and Donald Trump.