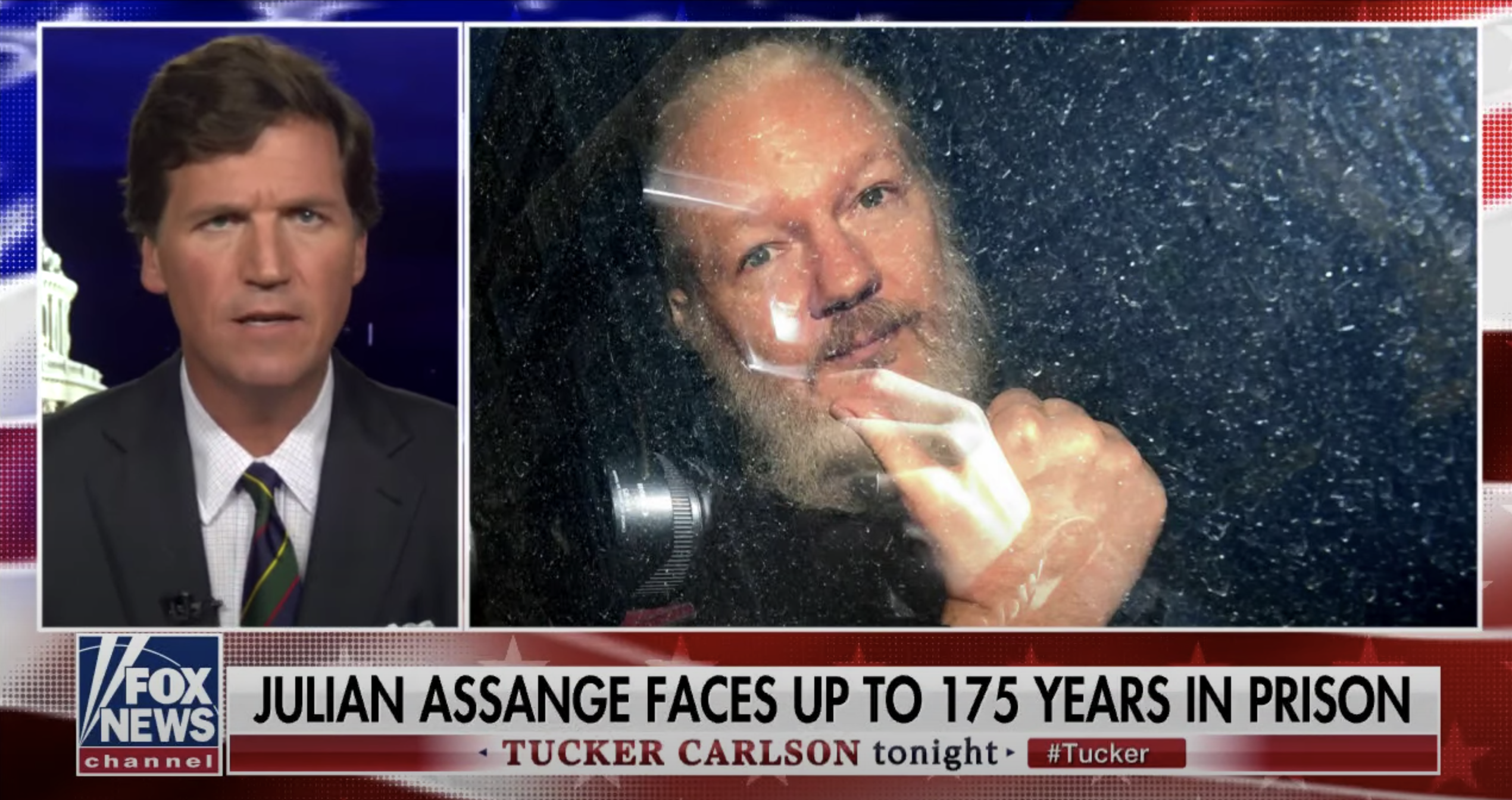 Two days ago, Glenn Greenwald started teasing a cable appearance where he was going to discuss — he claimed — the dangers an Assange extradition poses to press freedom. He was coy, however, about what outlet it was. 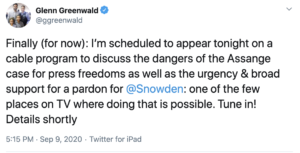 When he announced that his appearance had been postponed, he was again coy about what outlet this was.

The next day he described how “tyrannical” the hawkish civil servants who inhabit the Deep State are.

Last night, shortly before he went on, he revealed the cable outlet was Tucker Carlson’s show, which, he claimed, was “one of the few places on cable” where he could discuss the dangers of the prosecution of Julian Assange and the persecution of Edward Snowden. He excused his appearance on a white supremacist’s show by explaining that he cares more about having an opportunity to speak to “millions of Americans” about the “abuse of power by CIA/DOJ in persecuting those who expose the truth” than he does about the “sentiments of online liberals.” 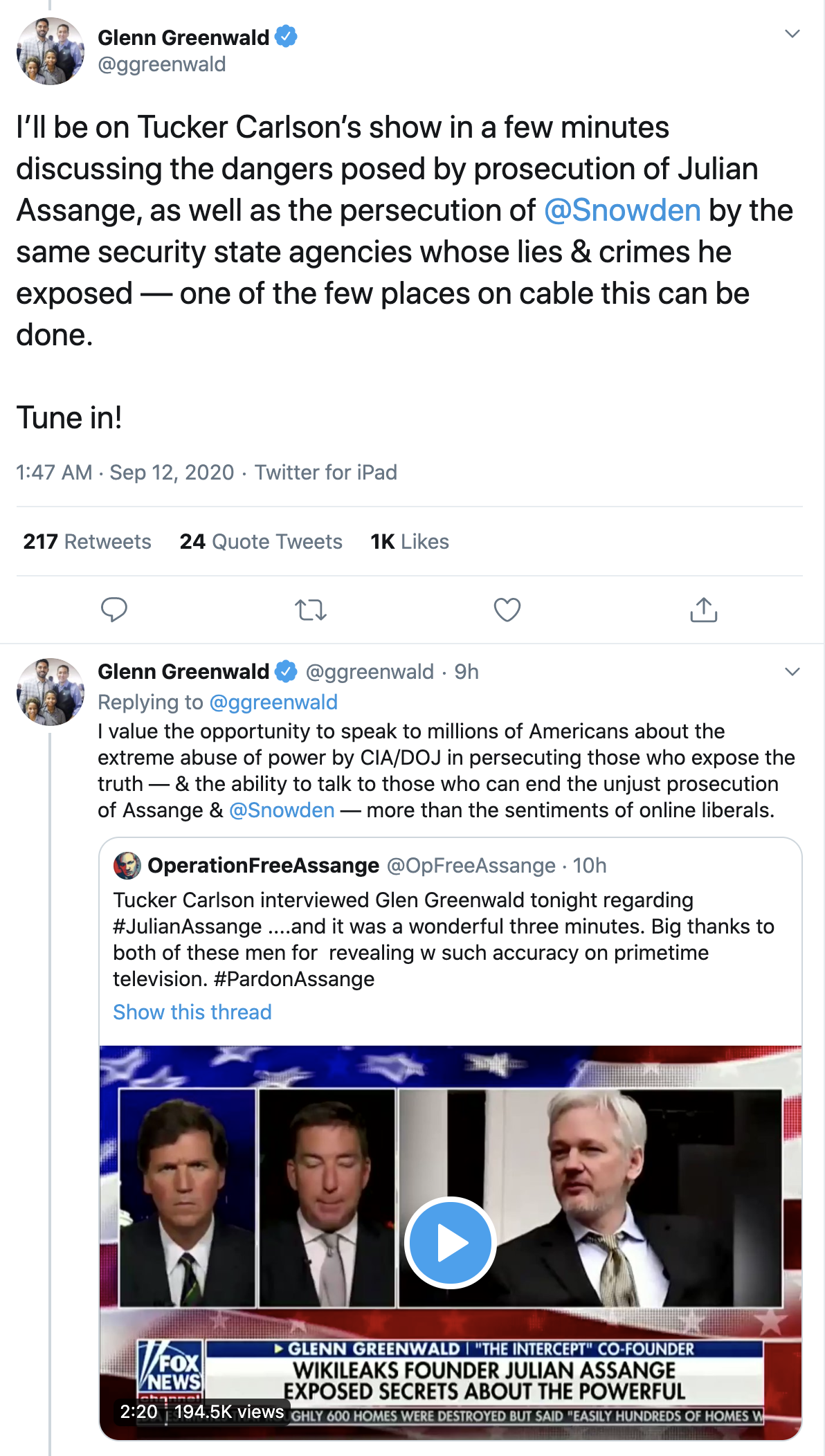 Tucker: WikiLeaks’ Julian Assange has been held in a high security prison since his arrest last spring in the Ecuadorian Embassy where he effectively was held for many years, in isolation. His extradition hearing is now finally under way. Assange’s lawyer estimates he could face 175 years in prison if he’s extradited to the United States. He faces Espionage charges here. WikiLeaks exposed all kinds of things, some of which it was good to know — including corruption by the Democratic National Committee in 2016. So what is the story on Julian Assange. Why is the DOJ pursuing this case so aggressively? Glenn Greenwald has followed this from the very beginning. He is of course a journalist, founded The Intercept. And we’re happy to have him tonight. So Glenn, thanks for coming on. I think a lot of people have heard for years that Julian Assange is a bad guy who hurt the United States, now the United States is going to bring justice in this case. What’s your view of this? Tell us what we should know, in 3 minutes, about Julian Assange.

Tucker: So, in thirty seconds, the President could pardon Julian Assange right now, and end this. Is that correct?

Glenn: He could pardon him and Edward Snowden and there’s widespread support across the political spectrum on both the right and the left for doing both. It would be politically advantageous for the President. The only people who would be angry would be Susan Rice, John Brennan, Jim Comey, and James Clapper because they’re the ones who both of them exposed.

As has become the new norm for Glenn, there’s a lot that is exaggerated or simply made up in this rant (I’ve bolded the four main claims above):

And while WikiLeaks releases have been embarrassing in certain ways to John Brennan, Jim Comey, and (especially) James Clapper, I’m particularly astounded that Glenn claims that Susan Rice was “exposed” by the releases.

I checked. I found just three Cablegate releases involving Susan Rice. One discusses efforts to remain engaged in the Democratic Republic of Congo. One discusses a meeting between Rice, Dennis Ross, and Ban Ki-moon where Obama’s officials described wanting to establish a bilateral channel with Iran in pursuit of peace.

Ambassador Rice and Special Advisor for the Gulf and Southwest Asia Ambassador Dennis Ross on June 9 met with UN Secretary-General Ban Ki-moon to explain key elements of U.S. diplomatic outreach to Iran and to hear Ban’s assessment. Ambassador Ross explained that President Obama in various fora and particularly from Cairo has made it clear that the USG will engage Iran without any preconditions.

Ambassador Ross said the USG values the P5 1 structure for dealing with Iran because it is a statement of the international community’s resolve to deal with the nuclear issue in a coordinated fashion, and he said the USG will be a full participant in the P5 1 structure. Despite its importance, Ambassador Ross said the USG aims to engage Iran bilaterally, because that would allow for a broader treatment of the issues, which is more difficult to achieve in a multilateral context.

And one describes Rice engaging with UN Relief and Works Agency (UNRWA) Director for Gaza John Ging to learn how supporting infrastructure projects in Gaza would counter the growth of Hamas.

In an October 22 meeting with USUN Ambassador Susan Rice, UN Special Coordinator for the Middle East Peace Process (UNSCO) Robert Serry and UN Relief and Works Agency (UNRWA) Director for Gaza John Ging emphasized the need to restart essential infrastructure projects in Gaza, including shelters and schools. As a result of the Israeli “blockade,” both Serry and Ging noted that Hamas now controls Gaza’s tunnel-driven economy, increasing people’s dependency on Hamas. Ging described a population in Gaza suffering from massive physical devastation. He pointed out that while Hamas has all the cement it needs to build a new checkpoint near Erez, the UN cannot get the cement it needs to build a single school. Serry stressed the need for a new strategy on Gaza, suggesting that the current policy has only strengthened Hamas’ position.

In short, purported anti-imperialist Glenn Greenwald claims that Susan Rice was “exposed” because Cablegate revealed her involvement in efforts to make peace in Iran and Gaza.

But Glenn’s lies and exaggerations aren’t the craziest thing about this appearance.

The craziest thing about the appearance is that Glenn doesn’t talk about the danger to journalism of an Assange extradition.

What Glenn does instead of discussing the very real dangers that the Assange extradition poses to journalism is instead push Trump’s buttons — the very same buttons that Sergei Kislyak first started pushing on December 31, 2016, when he called Flynn to tell him that Putin had not retaliated against Obama’s sanctions because, in part, the sanctions were “targeted not only against Russia, but also the president elect.”

KISLYAK: Your proposal that we need to act with cold heads, uh, is exactly what is uh, invested in the decision.

KISLYAK: And I just wanted to tel I you that we found that these actions have targeted not only against Russia, but also against the president elect.

KISLYAK: and and with all our rights to responds we have decided not to act now because, its because people are dissatisfied with the lost of elections and, and its very deplorable. So, so I just wanted to let you know that our conversation was taken with weight.

Glenn’s case — made in an appearance that was transparently an attempt to lobby the President directly — wasn’t about journalism. It was about sticking it to the “tyrannical” civil servants in the Deep State™ who had the audacity to try to protect the country from Russian interference. Glenn pitched this as one more way for Trump to damage Obama (which is presumably why Glenn falsely claimed that Obama was the most embarrassed by the disclosures), spitting out the names — Jim Comey, James Clapper, and Susan Rice’s tyrannical consideration of how to improve life in Gaza — that serve as triggers to the President.

And, remarkably, at a time when all the messaging of WikiLeaks supporters is focused on claiming that Trump has targeted Assange as part of his larger war on the press (a bullshit claim, but politically useful in an effort to mobilize press advocates in support of Assange), Glenn does the opposite, suggesting that Trump wants to pardon Assange (and Snowden), but the Deep State that Trump has been in charge of for 45 months, that Trump has purged of any disloyalty and much competence, is preventing him.

Of course, Tucker knows his audience of one, and so tees this up perfectly, reminding Trump of the only information Assange exposed that Trump cares about: Democratic emails that Russia released to help Trump get elected.

Seven days after the election, Trump’s rat-fucker, Roger Stone, started pursuing a pardon for Julian Assange. I’m increasingly convinced that effort started earlier, as part of Stone’s efforts to optimize the release of the emails in August 2016. Up until now, the overt signs of the effort to pay off Trump’s debt to Assange (and Russia) for help getting elected seemed to cease in 2018, after the nihilistic damage of the Vault 7 releases made such an effort increasingly toxic (and perhaps because the Mueller investigation made it legally dangerous).

But last night, Glenn Greenwald joined Tucker Carlson to renew the effort explicitly, claiming to defend press freedoms but instead pitching it as an opportunity to stick to to a Deep State™ that both Glenn and Trump have inflated so ridiculously that they prefer real tyranny to civil servants pursuing draconian measures within the dregs of law that Trump hasn’t already blown away.

For four years, this campaign debt has been hanging over Trump’s head. And Glenn Greenwald, pushing all the same buttons Russia did starting in 2016, last night moved to close the deal.