Yesterday, Julian Assange’s lawyer Jennifer Robinson had a statement (which has not been released) read at his extradition hearing describing that she witnessed a meeting between Assange and Dana Rohrabacher on August 15, 2017 (Neo-Nazi Chuck Johnson was also present), where the Congressman said he had a win-win deal to offer: Trump would pardon Julian Assange if Assange would say that the source of the stolen DNC emails was not Russia.

Robinson stated that Assange did not disclose the source. Based on reports, though, she did not appear to deny that Assange had claimed his source was not Russia, which is what Rohrabacher reported at the time.

A lawyer representing the United States did not contest Robinson’s report, agreeing that the offer occurred. But representatives from the US did state that Trump had not agreed to it (which, without access to the exact statement, could mean any thing, but Trump certainly hasn’t pardoned Assange, yet).

Amid a laudable parade of arguments at Assange’s extradition hearing about the Espionage Act and discussions of all the important disclosures associated with the 2010 WikiLeaks releases for which Julian Assange is fighting extradition — including testimony read from German torture victim Khaled al-Masri, one of the first times he has had his say in public — including this statement was a cynical, and I would argue, damning, ploy.

In spite of the frenzy from the US press about the statement, the claim is not new. It was reported immediately by the Daily Caller (I covered that report here). Then Assange tweeted and then released on Facebook a statement asserting that reports from others should not be deemed authoritative. “Only unmediated statements coming directly from me can be considered authoritative.” Rohrabacher issued a statement, in which he promised to divulge what Assange stated to Trump.

Neither explicitly admitted what was obvious, that it was a pardon quid pro quo.

In a follow-up interview with the Daily Caller, Rohrabacher claimed not to remember whether he spoke to anyone at the White House about the meeting. Then, in a follow-up interview with Sean Hannity, Rohrabacher said, “It is my understanding from other parties who are trying to arrange the rendezvous that a rendezvous with myself and the President is being arranged for me to give him the firsthand information from him.” Earlier this year (when WikiLeaks announced that Robinson was going to resuscitate this story), Kim Dot Com released texts describing how he had pushed Trump’s best friend (whom he claimed not to identify) to accept the deal. 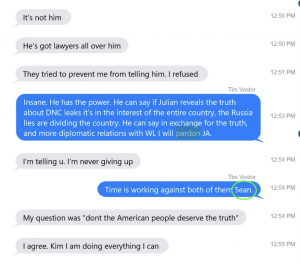 Those texts identified the best friend as Sean Hannity, the same guy who hosted Rohrabacher to explain that, “other parties [were] trying to arrange the rendezvous that a rendezvous with myself and the President is being arranged for me to give him the firsthand information from him.”

Ultimately, Chief of Staff John Kelly refused to let the President meet with Rohrabacher, just like he refused other agents of disinformation about the Russian hack to meet with him in the same period.

Mr. Rohrabacher confirmed he spoke to Mr. Kelly this week but declined to discuss the content of their conversation. “I can’t confirm or deny anything about a private conversation at that level,” he said in a brief interview. He declined to elaborate further.

In the call with Mr. Kelly, Mr. Rohrabacher pushed for a meeting between Mr. Assange and a representative of Mr. Trump, preferably someone with direct communication with the president.

On its face, the pardon dangle story proves only that Julian Assange was willing to meet with someone widely presumed to be Russian asset, Dana Rohrabacher, and a far right white nationalist to help float false claims about Russia’s role in getting Trump elected. It also proves that, at the time (when Trump was desperately trying to shut down the investigation into his coordination with Russia in the 2016 election and one after another were giving false prepared statements denying such coordination), the President had a Chief of Staff with the ability to look out after his legal interests.

And while I doubt lawyers for the US will go there, in context, the fact that WikiLeaks’ defense team presented just one of the at least four pardon dangles — including one for which the import of Russian disinformation is more obvious than others — is a testament to the degree to which the true story of those pardon discussions would make WikiLeaks’ compromise by Russia clear.

Here are the known discussions of pardons since WikiLeaks released emails in such a way as to optimize their benefit to getting authoritarian torture fan Donald Trump elected.

So one pardon pitch immediately after Assange worked with Russia to get Trump elected, another one brokered by Oleg Deripaska’s lawyer, a third pitched by a Congressman widely believed to be a Russian asset, and finally Glenn’s pitch for a pardon as a great way to do damage to the intelligence community.

Not only did Russia figure in all of those pardon dangles, but each was pitched not as a way to honor Assange’s debt to journalism, but instead to serve Russia’s purposes. And for some reason WikiLeaks thinks that raising just one of these — while remaining silent about perhaps the most damning pardon dangle — helps prove its case that Julian Assange is a journalist and not the Russian spy the prosecutors in this case claim to believe he is.

Really Big Girl Randy Credico Refuses to Answer Whether Roger Stone Called Him about an Assange...