The Still-Secret Cultivation of Alex Jones by Guccifer 2.0

One of the more interesting redactions in the SSCI Russia Report hides details of how dcleaks and Guccifer 2.0 reached out to Alex Jones. Citing to five pages of a report the title of which is also redacted, the four paragraphs appear between the discussions of Guccifer 2.0’s outreach to then-InfoWars affiliate Roger Stone and Guccifer 2.0 and dcleaks’ communication with each other. 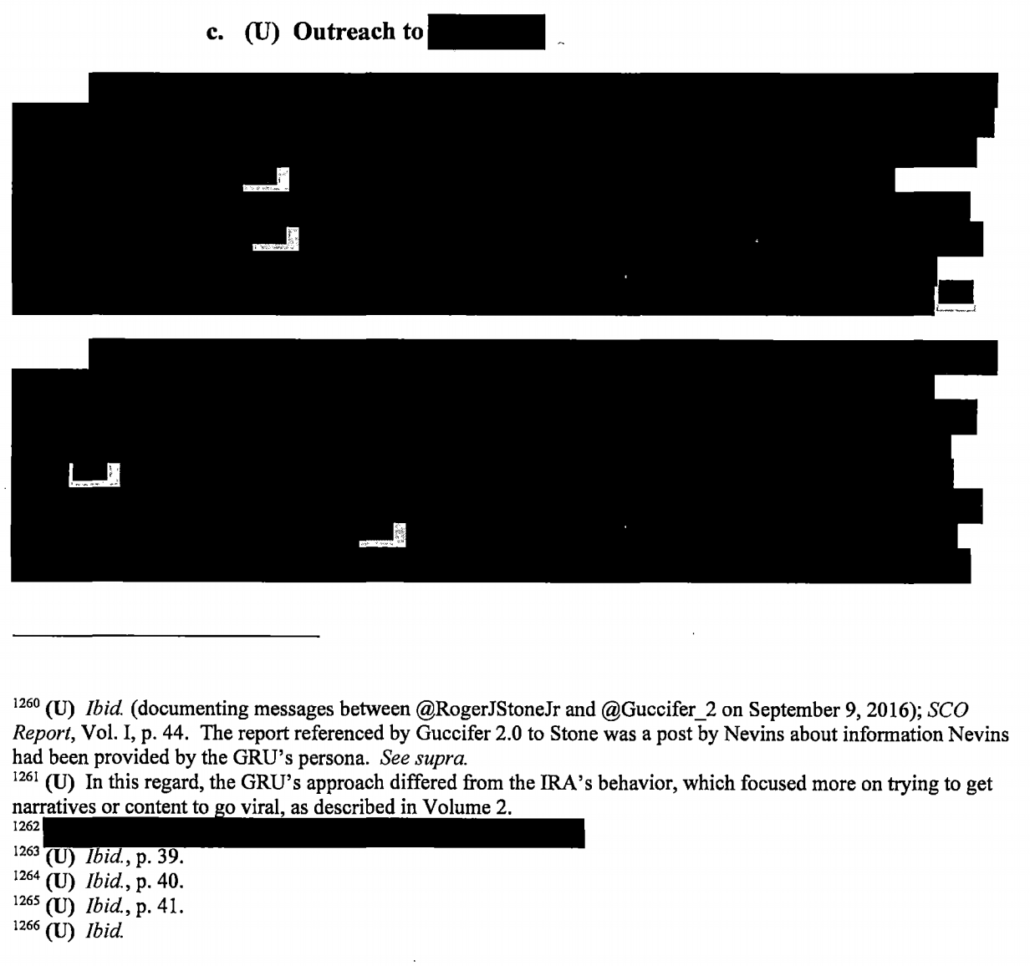 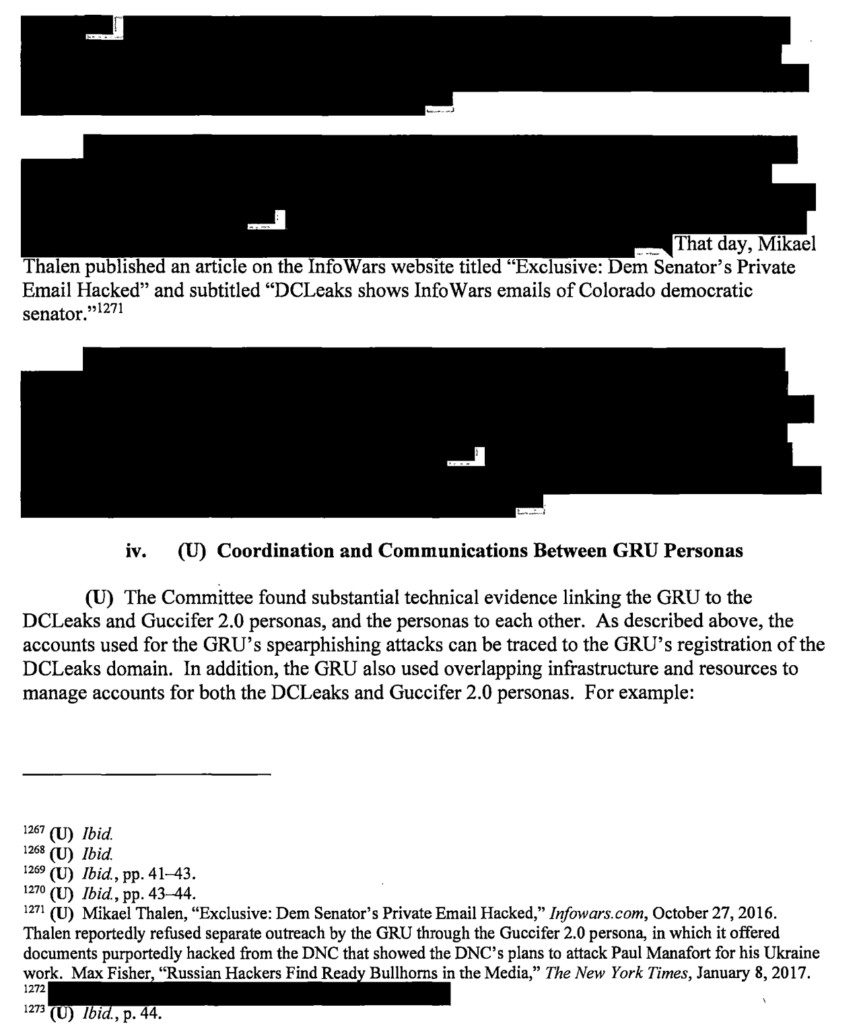 Thomas Rid provides a bit of background in his book, Active Measures (which is good in some parts, offers details of the 2016 attack that aren’t readily public, but does really uneven and in a few places incorrect interpretation of what that evidence means).

The GRU’s active measures in 2016 were never meant to be stealthy, only to be effective. In early October, the Russian intelligence officers learned from an official press release of their American counterparts that their two U.S. front accounts had been exposed—which meant, in effect, that they knew the accounts were now under surveillance. Nevertheless, they still continued to use these very accounts to reach out privately to journalists, and to escalate their disinformation game.

On October 18, for example, as the election campaign was white hot and during the daily onslaught of Podesta leaks, both GRU fronts attempted to reach out to Alex Jones, a then-prominent conspiracy theorist who ran a far-right media organization called Infowars. The fronts contacted two reporters at Infowars, offered exclusive material, and asked to be put in touch with the boss directly. One of the reporters was Mikael Thalen, who then covered computer security. First it was DCleaks that contacted Thalen. Then, the following day, Guccifer 2.0 contacted him in a similar fashion. Thalen, however, saw through the ruse and was determined not to “become a pawn” of the Russian disinformation operation; after all, he worked at Infowars. So Thalen waited until his boss was live on a show and distracted, then proceeded to impersonate Jones vis-à-vis the Russian intelligence fronts.23

“Hey, Alex here. What can I do for you?” the faux Alex Jones privately messaged to the faux Guccifer 2.0 on Twitter, later on October 18.

“Good. Just in between breaks on the show,” said the Jones account. “did u see my last twit about taxes?”

Thalen, pretending to be Jones, said he didn’t, and kept responses short. The officers manning the Guccifer 2.0 account, meanwhile, displayed how bad they were at media outreach work, and consequently how much value Julian Assange added to their campaign. “do u remember story about manafort?” they asked Jones in butchered English, referring to Paul Manafort, Donald Trump’s former campaign manager. But Thalen no longer responded. “dems prepared to attack him earlier. I found out it from the docs. is it interesting for u?”24

Rid describes just one of two outreaches to Jones (through his IC sources, he may know of the report the SSCI relies on). And while Thalen claims to have rebuffed this one, as SSCI notes, he did publish a less pertinent story using stolen documents.

This one, however, uses as entrée some stolen documents from May 2016 showing that the Democrats were doing basic campaign research on Trump’s financials. It then purports to offer “Alex Jones” information on early Democratic attacks on Paul Manafort’s substantial Ukrainian graft, possibly part of the larger GRU effort to claim that Ukraine had planned an election year attack on Trump.

Rid, as he does throughout his analysis of the GRU personas, treats this as a failed attempt to sow disinformation, without considering the performative aspects of DMs sent by entities that know law enforcement can see those DMs.

Still, none of that explains why this passage was redacted, even while — with the unredacted reference to Thalen — making it clear that the redaction pertains to InfoWars and therefore is (as it is in the report) Roger Stone-adjacent. It may be SSCI considered ties between Guccifer 2.0 and another of Trump’s right wing propagandists too sensitive to release, as they did with other information damaging to Trump. It may be that the IC still considers this outreach to Jones sensitive.

tweets from our circle
bmaz@bmazYes, make this so: Idris Elba in the 'Conversation' to Play James Bond Next, Producers Say tmz.com/2022/01/22/idr… via @TMZ23 minutes ago23 January 2022
Ed Walker 🍞🌹💉💉@MasaccioEWRT @donmoyn: This should be a bombshell story about political interference in research and teaching in Florida but it will likely get minim…51 minutes ago23 January 2022
Ed Walker 🍞🌹💉💉@MasaccioEWRT @JamesSurowiecki: You knew this was going to happen, because the league could not risk Aaron Rodgers testing positive right before the S…1 hour ago23 January 2022
emptywheel@emptywheelRT @marcambinder: The ol' show them their own playbook so they can't use it trick can be surprisingly effective. It also requires excellen…2 hours ago23 January 2022
emptywheel@emptywheelI kind of wonder whether @CoChairMeshawn is trying to distract from the fact that she signed a forged doc that got… twitter.com/i/web/status/1…3 hours ago22 January 2022
RayneToday@raynetodayCrazy. Epshteyn makes like Manafort did in front of the camera during RNC. Can't wait for his appearance in front o… twitter.com/i/web/status/1…5 hours ago22 January 2022
Jim White@JimWhiteGNVRT @RevDrBarber: “​​There are people in this country who are dying in their beds right now, but Congresspeople are going on vacation and le…8 hours ago22 January 2022
RayneToday@raynetodayDrive for Show, Putt for Dough, Cheat for Tax Deductions emptywheel.net/2022/01/20/dri… << a post by me about the NYAG's M… twitter.com/i/web/status/1…2 days ago20 January 2022

A Month after Trump Learned that Mueller Knew of the Pardon Deal, Cassandra... “A Digital Pearl Harbor:” The Ways in Which the Vault 7 Leak Could...