As I noted in this post, the discovery shared with Mike Flynn is rife with inconsistencies. While I think the most egregious decision pertains to the decision to hide William Barnett’s descriptions of what must be descriptions of Brandon Van Grack agreeing with Barnett on the least damning interpretations of Flynn’s lies, the alteration of Peter Strzok’s notes to smear Joe Biden may have the most immediate impact.

That said, I want to note that in the last batch of documents released, DOJ has adopted yet another way to add dates to undated notes.

On notes by one OAG lawyer, DOJ includes the date of a meeting, March 6, 2017, in the redaction. 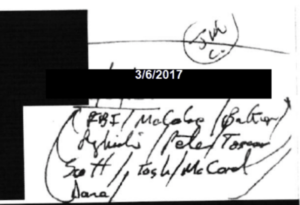 But DOJ provides no date for another set of notes included with the batch. The date on this note is important because the view of Flynn’s involvement in “collusion” evolved as call records came back to reveal that Flynn had coordinated with Mar-a-Lago.

To sum up then, DOJ has used at least two and probably 3 different methods to write its own date on handwritten notes. Adding post-it notes (in the case of Strzok’s notes), apparently writing the date on the notes itself (in the case of McCabe’s notes), and integrating it into the redaction.

That makes the use of post-it notes on Strzok’s notes all the more problematic.

DOJ’s NSL Report Proves that William Barnett Misrepresented the Evidence... On a Key Issue in Mike Flynn’s Case — which FBI Agent to Believe...