There’s a remarkable paragraph in this NYT story explaining that the White House refuses to contact trace the attendees at the party for “pro-life” Amy Coney Barrett, a feeding frenzy of Federalist Society members itching to fill another SCOTUS seat, where numerous people caught a deadly disease.

The White House has decided not to trace the contacts of guests and staff members at the Rose Garden celebration 10 days ago for Judge Amy Coney Barrett, where at least eight people, including the president, may have become infected, according to a White House official familiar with the plans.

The paragraph suggests, based on no evidence, that the gala of Federalist Society members is where the President got sick.

And yet the rest of the story suggests that the White House knows that’s not what happened, that the President may well have, instead, made everyone else sick.

If the White House didn’t at least suspect that the President was the vector at the gala, after all, they would not pursue the policy of keeping all contact tracing in-house and limiting it to those who contacted the President for the two days — presumably meaning 48 hours — in advance of his late Thursday night confirmed diagnosis.

Instead, it has limited its efforts to notifying people who came in close contact with Mr. Trump in the two days before his Covid diagnosis Thursday evening. It has also cut the Centers for Disease Control and Prevention, which has the government’s most extensive knowledge and resources for contact tracing, out of the process.

After Mr. Trump’s illness was diagnosed, an internal C.D.C. email on Friday asked the agency’s scientists to be ready to go to Washington for contact tracing, but a request from the White House for assistance never came, according to two senior C.D.C. scientists.

Instead, the tracing efforts are being run by the White House Medical Unit, a group of about 30 doctors, nurses and physician assistants, headed by Dr. Sean Conley, the White House physician, who has been the public spokesman for Mr. Trump’s doctors.

Judd Deere, a White House spokesman, said that a “robust contact tracing program” was underway “led by the White House Medical Unit with C.D.C. integration.” The “integration” refers to an epidemiologist from the C.D.C. who has been detailed to the unit since March, according to a White House official.

The two day contact tracing is guaranteed not to show that Trump could have infected anyone at the debate, which was slightly more than 48 hours before Trump was diagnosed.

More importantly, it guarantees that Trump cannot be shown to be the vector that exposed a great number of important people, including at least three Senators critical to the effort to rush through Barnett’s confirmation before the election, and possibly even the Chief Justice. 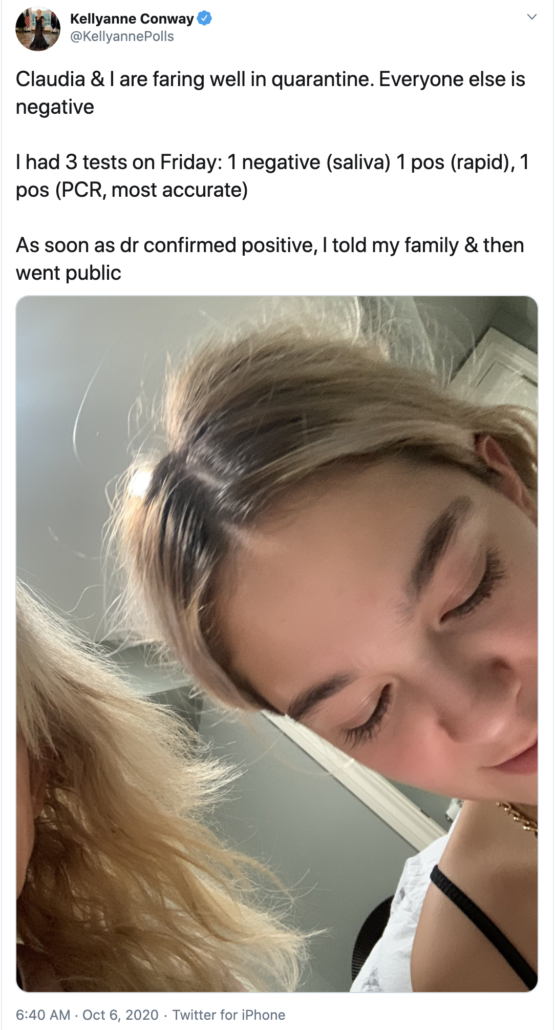 The NYT has very good reason to suspect that Trump was infected before the Federalist Society super-spreader party. That’s because NYT White House Correspondent Michael Shear is among the journalists who has tested positive in this latest White House cluster. Shear believes he had to have been infected on September 26, but he didn’t attend the super-spreader event. He showed up to the White House earlier that day to take a COVID test, and then, later that evening, flew on Air Force One, where Trump spoke to reporters, not wearing a mask, for about 10 minutes.

While there are other possibilities, if Trump infected Shear during that short conversation, it would mean that the President would have been shedding COVID earlier in the day, all over the VIPs at the event full of Federalist Society members.

By admitting they need to contract trace back the two days before Trump was diagnosed, the White House is now all but admitting that Trump was already positive at the debate, meaning his 77-year old opponent has narrowly survived exposure the disease too. But they’re only doing that to avoid admitting what is quite likely, but far more damning: that he was the vector by which everyone else got infected on September 26.

Hours ago, Kellyanne Conway confirmed what her troubled daughter Claudia earlier claimed on TikTok. Claudia has now tested positive (though George, who no longer gets invited to the best Federalist Society galas, apparently did not). Kellyanne tried to suggest that there had been no delay in her own diagnosis, thereby denying that she’s the advisor described in a WSJ article who was ordered to lie about her diagnosis.

But there was a delay. There was a delay because the White House is desperately trying to cover up that the President may have been the one who infected all those VIPs. Those VIPs, and now an innocent 15-year old young woman.

Update: Clarified why I’m branding this to the “pro-life” Federalist Society.

Update: Corrected to note that Joe Biden was likely exposed to the disease. There’s no indication he (or John Roberts, who was likely also exposed to it) have contracted it. h/t TW