2020 Vice Presidential Debate: In the Land of the Shoshone

This post is dedicated to discussion of the Vice Presidential debate between current VP Mike Pence and Democratic VP candidate Senator Kamala Harris.

The debate is scheduled to begin at 9:00 PM ET and will take place in the Nancy Peery Marriott Auditorium at the University of Utah’s Kingsbury Hall in Salt Lake City, Utah.

University of Utah’s efforts to prevent the dispersion of the candidates’ aerosolized exhalations — particularly those of Pence who has been in contact with infected persons within the last week — are absolutely laughable, evident in this photo of the stage (via NBC): 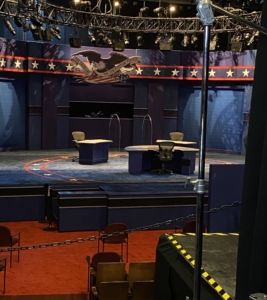 Check-out clerks at major grocery store chains and banks have more protection than this.

I’m crossing my fingers that Harris’s people have reached out to SC Senate candidate Jaime Harrison to see if they could borrow the folding plexiglass screen he used when debating Lindsey Graham.

Or found a mask with a built-in mic (why hasn’t this become a thing?) so that she has more protection but is still audible.

Like the three Presidential debates, this event is booked in a red state venue. None of the events organized by the allegedly nonpartisan, nonprofit Commission on Presidential Debates is scheduled for a blue state.

Utah’s state nickname is the Gateway to the West, but Native Americans know this is land taken from Ute, Paiute, and Shoshone tribes. Though some of the state falls under sketchy treaties, Salt Lake City itself is unceded land of the Northwestern Shoshone. Let’s hope this is recognized at some point during the evening.

USA Today’s Susan Page is the scheduled moderator, who has a conflict of interest:

… A potential conflict of interest has arisen in the vice-presidential debate. In late 2018, moderator Susan Page hosted a party in honor of Mike Pence’s protégé Seema Verma, who runs the Medicare and Medicaid programs for the Trump administration. As New York’s Ed Kilgore notes, the controversy centers on “whether a working journalist at Page’s level who has been hobnobbing with Mike Pence’s best-known associate in the Trump administration ought to be moderating his debate with Kamala Harris.” …

And in spite of the hubbub which arose when this conflict of interest was identified, Page and USA Today have refused to do anything about it — apparently there are no other journalists at USA Today covering the presidential race who are free of conflicts…? Or COVID-negative?

Sure hope it comes up in the debate that Mike Pence has had to return to DC when Air Force 2 was turned around mid-flight on its way to or from New Hampshire not once but twice in the last 18 months.

Has any journalist confirmed it was Air Force 2 hitting a bird which caused Pence to turn around on September 22 and not something else? Or did they leave it to Pence’s communications people to explain this?

Add these two dates to your calendar for the remaining two presidential debates — if Trump is healthy enough to participate:

I’m not holding my breath for these.