McCabe Casts Doubt on the Date Added to His Notes, Too 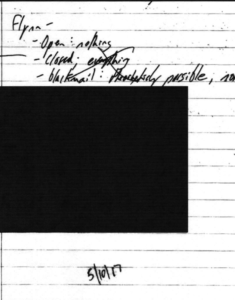 In my coverage of the way DOJ has added dates to undated notes, I’ve always said that I have no reason to believe that the date DOJ added to Andrew McCabe’s notes was erroneous.

In a letter that McCabe’s lawyer, Michael Bromwich sent to Judge Sullivan last week, he explains why the May 10, 2017 date added to McCabe’s notes couldn’t be remotely credible. That’s because he was busy cleaning up the Jim Comey firing.

The date “5/10/17” that appears on Exhibit B is not in Mr. McCabe’s handwriting and he did not enter the date that now appears there. Further, contrary to counsel’s claim, Mr. McCabe did not brief the Senate Intelligence Committee on anything on May 10. That was the day after President Trump had fired FBI Director Comey and Mr. McCabe was consumed with various other responsibilities. Mr. McCabe did participate in a public Senate Select Committee on Intelligence hearing and closed briefing on worldwide threats, along with other intelligence community officials, on May 11. Neither the public hearing nor the secret briefing had anything to do with Mr. Flynn. Counsel did not seek to confirm the accuracy of its claims with Mr. McCabe or us about Mr. McCabe’s notes before filing the Third Supplement.

Update: Bromwich is not saying that the date is not correct. He’s saying that the implication, created by the redaction, that McCabe briefed Flynn to SSCI on May 10, 2017 is incorrect.

These appear to be notes tracking McCabe’s day. The top half, redacted save the time and description, explains that at 5:15 PM on whatever day this was, McCabe was doing World Wide Threat hearing prep.

Then, on the same day but in no way related to it, he reviewed the Flynn case in some way or another.

The redaction also almost certainly splits the Flynn related information in half (note the bracket starting at “closed” and extending well into the redaction).

In any case, nothing in these notes suggest this happened after Comey’s firing, which is the point they’re trying to make of it.

Update: According to McCabe’s book, nothing happened after he attended a WWT prep session on May 10, because that took several hours, he had already been in two draining meetings at the White House that day, and he was pooped.

As the president requested, I went back to the White House that afternoon. When I arrived, at 2 P.M., the bodyguard Keith Schiller came down again and greeted me like I was his buddy, like someone he sees every day—Hey, what’s going on?

When I left the Oval Office, I went straight to a prep session at the Bureau. Jim Comey had been preparing for two weeks to testify at the Senate Intelligence Committee’s Worldwide Threats Hearing—an annual event where the director of national intelligence and the heads of the FBI, CIA, National Security Agency, and Defense Intelligence Agency share their assessments of the most urgent threats to U.S. national security and answer questions from senators about those threats. Preparation for the hearing typically involves a number of lengthy background sessions with staff and a review of hundreds of pages of briefing material; it also requires drafting an official statement for the record.

So when I left the Oval Office, I went straight back to a prep session that night. I had been to a lot of these meetings for Comey and Mueller—when I was involved in the prepping. Usually I had been the guy sitting at the right hand of the director, listening to everyone else’s contributions and trying to distill it all into better formulations.

Chiming in when you have a shapely little idea, I quickly discovered, is very different from sitting at the head of the table while a dozen people to your right and left argue the pros and cons of issue after issue, firing ideas and comments at you nonstop—all of which you have to take in while also assessing how those answers will be interpreted and processed by members of Congress, the president, and the media. I had never fully appreciated the complexity of that task. After two and a half hours of this, my tank was full. I had to get some sleep.

The passage makes clear that he had been a part of Comey’s prep before Comey was fired, and that prep had been going on for two weeks. Which suggests that McCabe could have attended a WWT hearing any time in the previous two weeks.

That’s not definitive, of course (though it was almost certainly written with the benefit of McCabe’s notes). But this passage suggests the date is wrong, and the Flynn briefing took place before Comey’s firing.