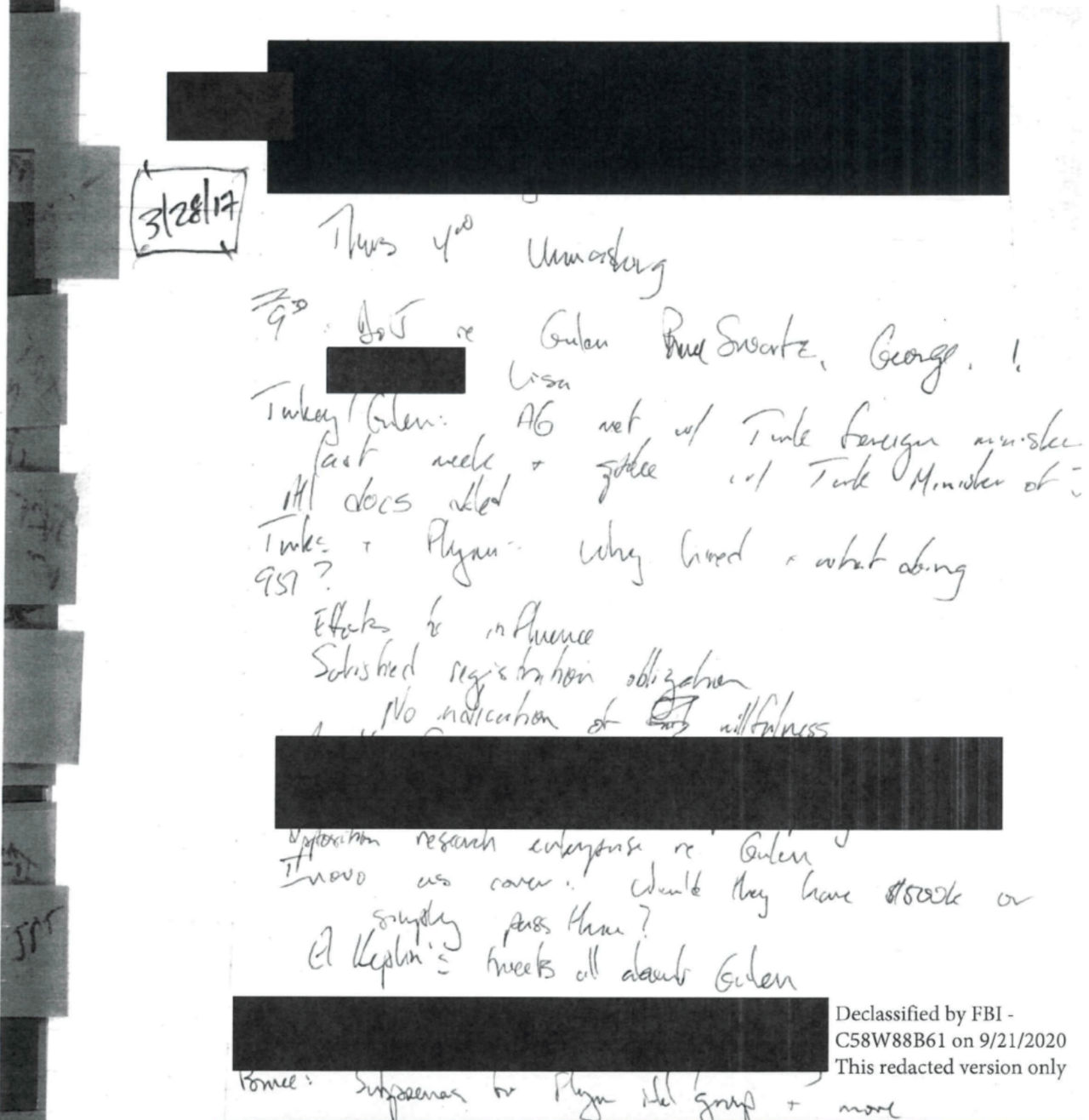 In a still pending motion to withdraw Mike Flynn’s guilty plea submitted in January, Sidney Powell told this story about how the baddies in DOJ’s FARA unit — led by David Laufman — entrapped the General in lies.

I’ve linked to the exhibits where Powell claims her arguments are supported, though in places, they show the opposite — for example, Flynn lying to his lawyers claiming that he came up with the idea to write the op-ed himself — and in at least one case, the page Powell cites doesn’t exist.

The next day—Mr. Flynn’s first day out of the White House, with media camped around his house 24/7—Rob Kelner and Brian Smith of Covington, and Kristen Verderame, called Mr. Flynn to give him a status update on the FARA issues. Mr. Flynn accepted their recommendation that it was better to file, and he instructed the lawyers to “be precise.”11

On February 21, 2017, David Laufman, Heather Hunt, Tim Pugh, and multiple others from the FARA Unit telephone-conferenced with Covington. Ex. 8. Laufman directed the content, scope, and duration of the call. In this lengthy conversation, Kelner exacerbated his prior mistake, stating that “Flynn wrote [the op-ed],” and that Mr. Rafiekian, Mr. Flynn’s former business partner, provided “input.” Ex. 8 at 2. Kelner apparently misremembered or misspoke, but the SCO parlayed the description in the FARA form into a felony attributable to Mr. Flynn. Meanwhile, Covington—instead of owning any error and correcting it—began a campaign of obfuscation that deepened the conflicts, created Mr. Flynn’s criminal exposure, and led to repeated instances of ineffective assistance of counsel.12

That evening, Heather Hunt requested a meeting the next day at Covington’s offices to review the draft FARA filing in person. She and several others from the FARA unit, arrived and reviewed the FARA draft and discussed logistics. Mr. Smith made notes of matters to include in the filing, such as the New York meeting with Turkish officials, payments to Inovo, specifics of the Sphere contract, and Sphere’s budget (if established). The team noted that if Turkey was involved, it must be listed on the filing, and they created various reminders. Finally, Ms. Hunt reminded the Covington team to file by email and send a check to cover filing fees by a courier. 13 Ex. 9.

Covington filed the forms on March 7, 2017. Hunt acknowledged receipt at 10:50 p.m., prompting Smith to remark to his colleagues, “They are working late at the FARA Unit.” Ex.12.

Hardly had the FARA registration been uploaded on the FARA website when the onslaught of subpoenas began.14 On May 17, 2017, Special Counsel was appointed, and the much-massaged “final” Flynn 302 was reentered for use by the SCO. Soon thereafter, the SCO issued a search warrant for all Flynn’s electronic devices. Meanwhile, Covington’s August 14, 2017, invoice alone was $726,000, having written off 10% of its actual time. Ex. 13 at 3.

14 Covington received multiple subpoenas from the DOJ FARA unit, as well as subpoenas from the House Permanent Select Committee on Intelligence, the Senate Select Committee on Intelligence, and then Special Counsel Office. In response to these subpoenas, Covington provided many thousands of documents in sixteen productions from April 2017 through October 2017 alone, and Mr. Flynn’s legal fees exceeded two million dollars.

Powell is shading here, covering up the fact that Flynn told Covington & Burling he was writing his Fethullah Gulen op-ed to benefit the Trump campaign rather than entirely for the benefit of clients he knew to be Turkish government ministers. The claim by itself demonstrates how Powell provides evidence that her client lied, even while wailing about unfair prosecution.

But for my purposes, I’m primarily interested in the villains of this story: Flynn’s Covington lawyers who repeated Flynn’s lies, FARA Unit lawyer Heather Hunt who promptly confirmed receipt of a filing, and David Laufman.

Laufman, then Chief of the Counterintelligence and Export Control Section at DOJ, was an early villain in the evolving conspiracies about the investigation into Trump and his flunkies, even while he is the hero of the Trump flunky’s complaints that Jim Comey didn’t let Julian Assange extort the US government with Vault 7 files. 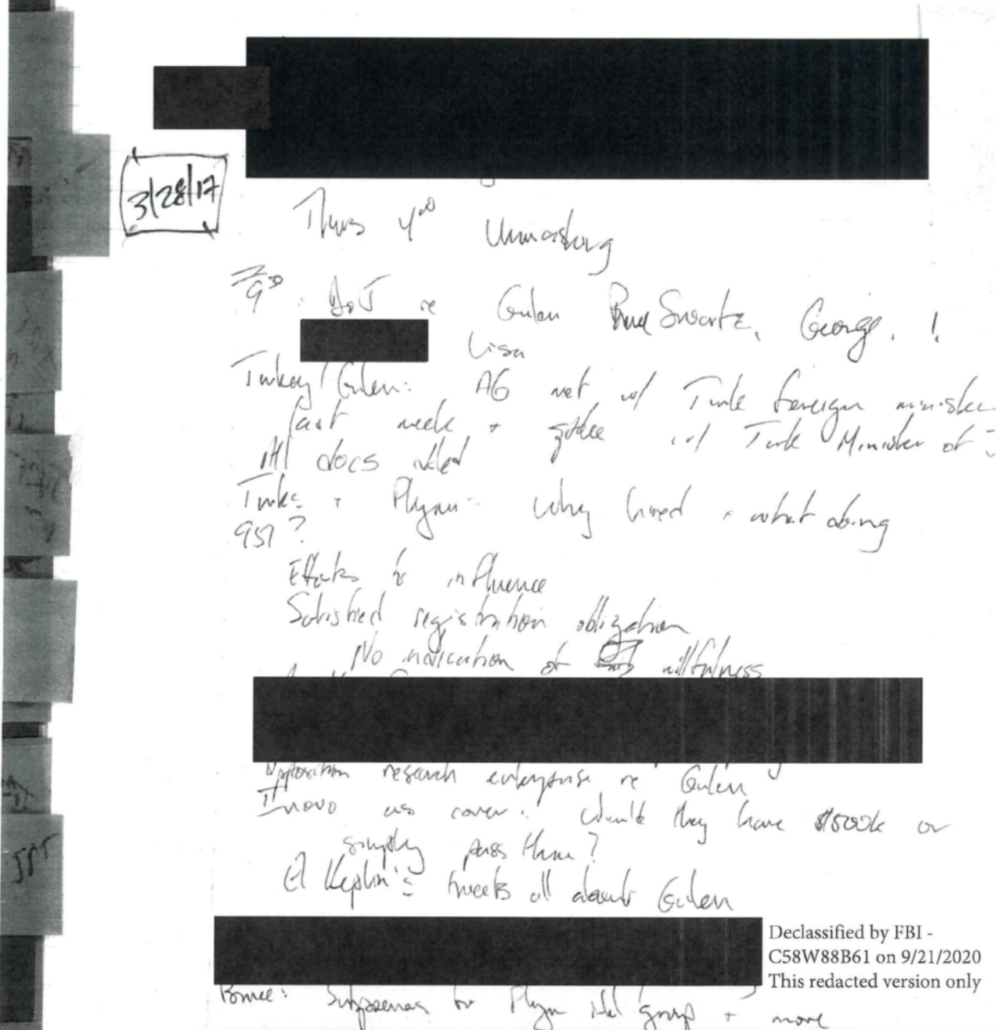 In her filing accompanying the latter, Powell ignores that the notes show that Jeff Sessions asked two Turkish ministers what Flynn had been doing for them in an engagement that — Flynn’s official filing submitted on March 7, 2017 claimed — he wasn’t actually sure whether he had been working for Turkey. Rather than puzzling through why the Turkish foreign ministers would know the answer to that if Flynn was instead working for Ekim Alptekin, Powell instead complains that on March 28, 2017, Swartz “decided” to subpoena Flynn’s company even though (she claims) he had just been told that Flynn had satisfied the registration obligation.

Whereas Laufman had been her villain, now Bruce Swartz is.

The thing is, that claim seems to be inconsistent with what her star witness, pro-Trump FBI Agent Bill Barnett, had to say in his interview with Jensen’s team (though since they’ve redacted Brandon Van Grack’s name it’s hard to tell). He seems to have said the Turkish case “was far stronger than the [Russian] investigation, in that there was specific information that could be investigated. BARNETT was working closely with [Van Grack]. BARNETT had worked with VAN GRACK on other matters.

In any case, the actual subpoena shows that it didn’t happen in March (as the purported date might suggest) but instead on April 5, a week later. And it wasn’t Swartz who filed it, nor even Van Grack, but EDVA AUSA William Sloan.

That doesn’t mean the date that Jensen’s team “inadvertently” applied to Strzok’s notes is wrong. It certainly may have taken a week to put together the subpoena.

But it does show that Powell’s current story doesn’t cohere with her past (still-pending) one.

Yet Another Warning from Michigan: FBI Busted Plot to Kidnap “That Wo... The Desperation of the Jeffrey Jensen Investigation Already Made Clear that...