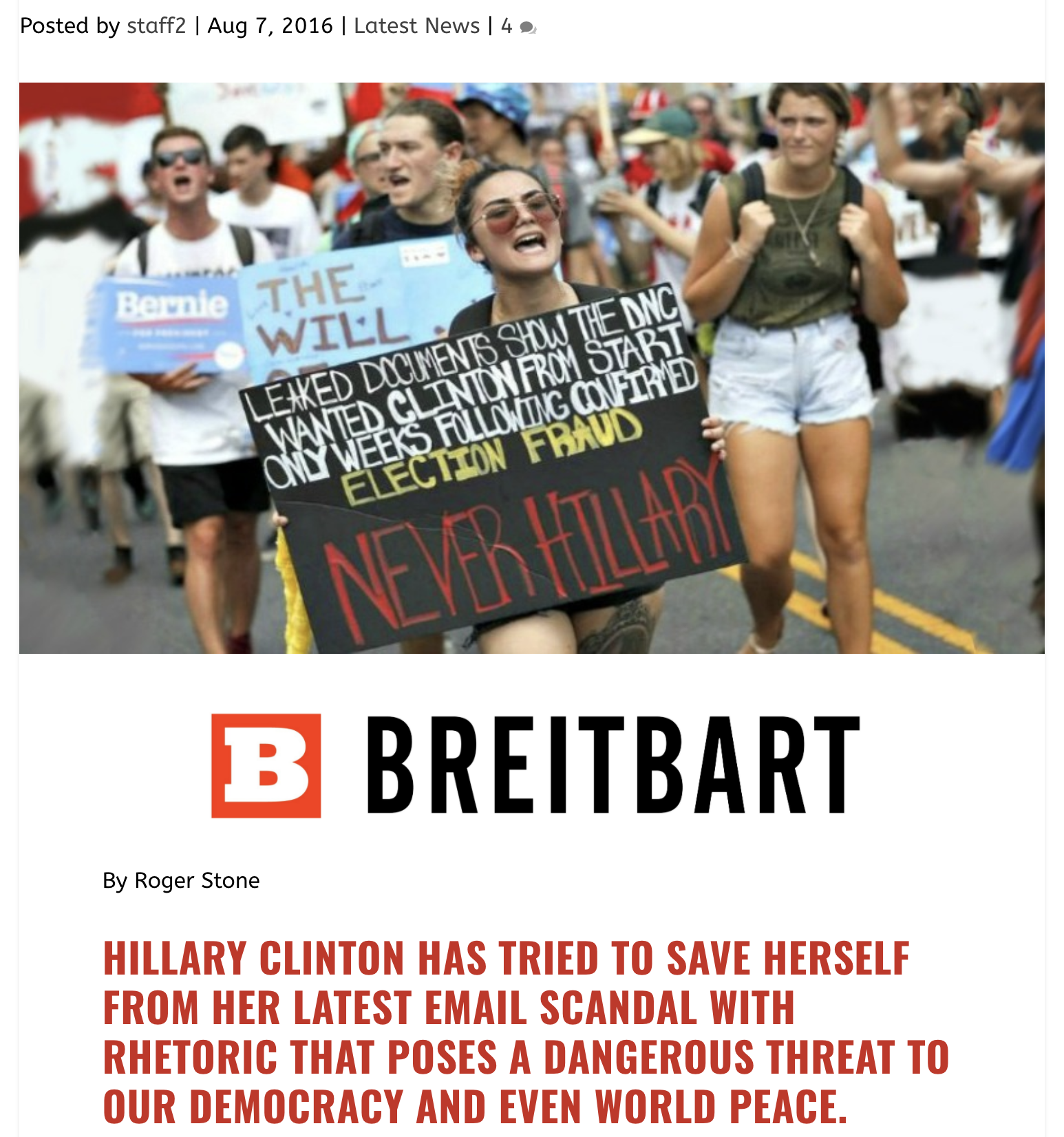 Yesterday, I noted several key problems with the way the frothy right is trying to politicize some reports that John Ratcliffe just declassified: Russian intelligence analysis picked up before July 28 ascribes to Hillary foreknowledge of what Roger Stone would start doing on August 5, first denying that Guccifer 2.0 was a Russian mouthpiece and then engaging in public and non-public Twitter conversations with the persona.

Ratcliffe left out an unbelievably important part of the report: the role of Guccifer 2.0 in the Russian report. Intelligence collected in late July 2016 claimed that Hillary was going to work her alleged smear around neither the GRU (which had already been identified as the perpetrator of the DNC hack) nor WikiLeaks (which had released the DNC files, to overt celebration by the Trump campaign), but Guccifer 2.0, who looked to be a minor cut-out in late July 2016 (when this intelligence was collected), but who looked a lot more important once Roger Stone’s overt and covert communications with Guccifer 2.0 became public weeks later.

While Hillary was already assailing Trump’s debt to Russia because of the hack, she was in no way focusing on Guccifer 2.0; nor did the Steele dossier that the frothy right seems to believe she used to seed this line of thinking at the FBI address Guccifer 2.0, at all.

There’s something still crazier about the insinuation, one I didn’t realize before I wrote this post.

Roger Stone’s public dalliances with Guccifer 2.0 — an Olympic difficulty flip-flop from attributing the Hillary hack to Russia to, instead, arguing that it was obvious Guccifer 2.0 was not Russian over a nine day span — came when he wrote a post at Brietbart claiming that Guccifer 2.0 was a lone hacker.

I have some news for Hillary and Democrats—I think I’ve got the real culprit. It doesn’t seem to be the Russians that hacked the DNC, but instead a hacker who goes by the name of Guccifer 2.0. The original Guccifer famously hacked Hillary’s home email server, you might remember.

Here’s Guccifer 2.0’s website. Have a look and you’ll see he explains who he is and why he did the hack of the DNC.

Now, ask yourself: Why is Roger Stone the guy showing you this? This website isn’t hidden but of course our pathetic press patsies haven’t reported it; they just keep repeating Hillary’s spin.

Before I tell why Hillary’s dishonest blame-casting is so dangerous, let me explain a little more about why it seems like Guccifer 2.0 is the real deal. He seems to have set up a Twitter account back in June and then a WordPress blog to let the world know that he’d hacked the DNC. 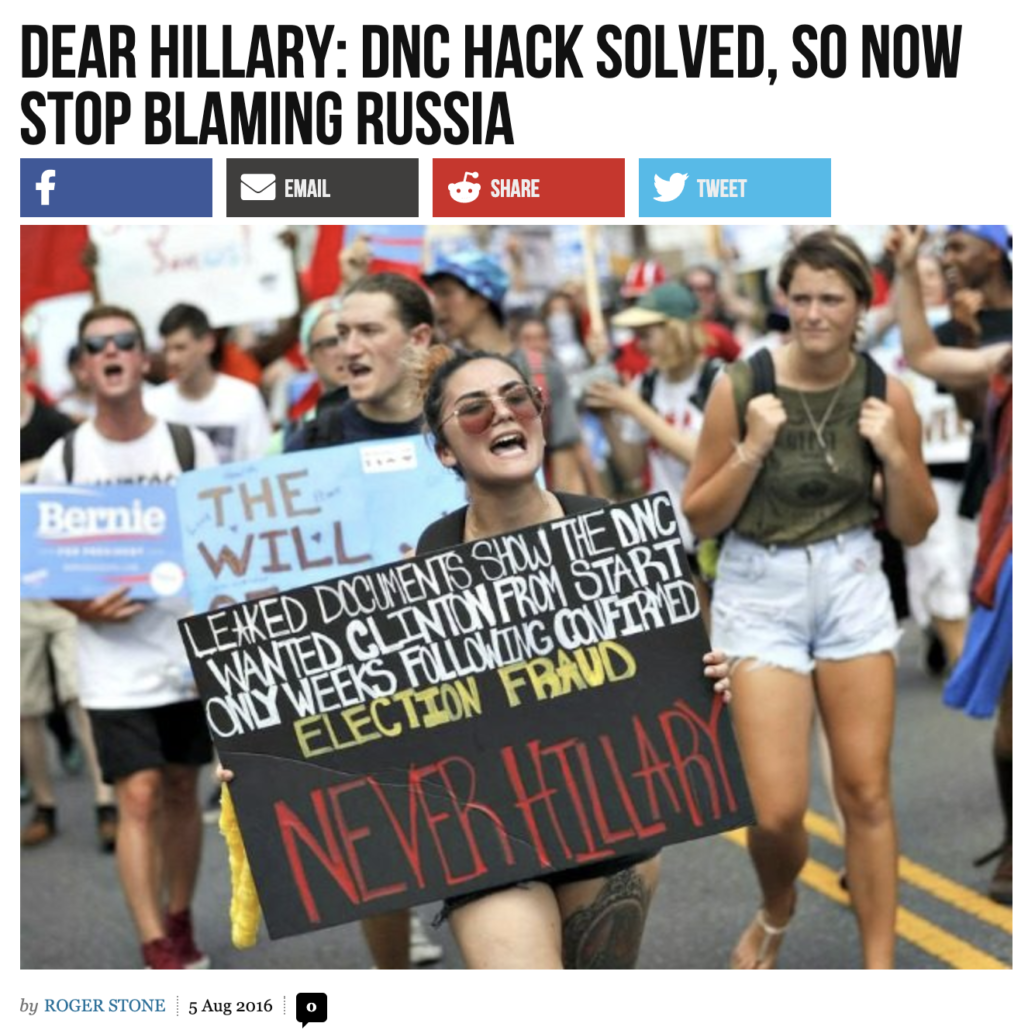 But two days later Stone reposted it at his own site, magnifying the sub-hed, “Hillary Clinton has tried to save herself from her latest email scandal with rhetoric that poses a dangerous threat to our democracy and even world peace.” 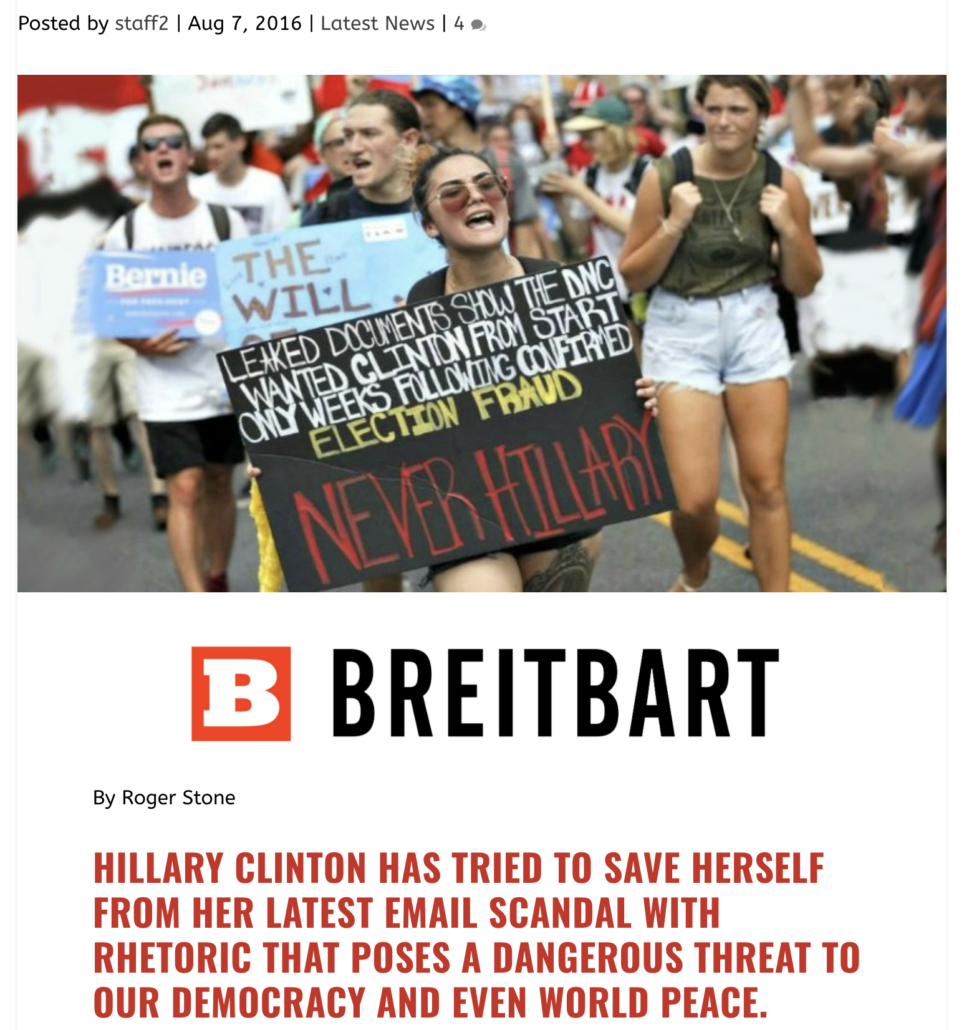 This line — in a post launching Stone’s public lobbying for Guccifer 2.0 — that Hillary was blaming Russia to cover up from her own email scandals, comes right out of that Russian intelligence report. It’s as if Stone was reading right off it.

And yet he was parroting a Russian script — which the CIA only discovered in late July and which would not get formally shared with the FBI until September 7 — on August 7, 31 days before the FBI even got that report.