I wrote a really long post cataloging all the problems with DOJ’s declaration of authenticity in the Mike Flynn case.

But the most important paragraph in the declaration has an astounding claim: that DOJ — in a declaration signed by Jocelyn Ballantine — affirmed that lawyers for both Peter Strzok and Andrew McCabe had confirmed that their clients’ notes were not altered. [Emphasis original]

The government acknowledges its obligation to produce true and accurate copies of documents. The government has fully admitted its administrative error with respect to the failure to remove three reviewer sticky notes containing estimated date notations affixed to three pages of undated notes (two belonging to former Deputy Assistant Director Peter Strzok, and one page belonging to former Deputy Director Andrew McCabe) prior to their disclosure. These dates were derived from surrounding pages’ dates in order to aid secondary reviewers. These three sticky notes were inadvertently not removed when the relevant documents were scanned by the FBI for production in discovery. See ECF 259. The government reiterates, however, that the content of those exhibits was not altered in any way, as confirmed by attorneys for both former FBI employees.

But the declaration and related filings only reflects communication from Aitan Goelman, Strzok’s lawyer.

Indeed, in the letter that McCabe’s lawyer sent to the court on October 2, he pointedly said that DOJ had not asked him to confirm the accuracy of its claims about the notes before filing them.

So I asked Michael Bromwich, McCabe’s lawyer, if he agrees with the assertion Ballantine made in yesterday’s filing. He told me he spoke with Ballantine a few weeks ago and doesn’t recall any such discussion.

But when he got an email from her on Sunday at 4PM, asking for him to let her know by 2PM Monday if her transcription was inaccurate, he pointedly declined to do so.

I have spoken with Mr. McCabe and he declines to provide you with any information in response to your request.

He believes DOJ’s conduct in this case is a shocking betrayal of the traditions of the Department of the Justice and undermines the rule of law that he spent his career defending and upholding. If you share with the Court our decision not to provide you with assistance, we ask that you share the reason.

We would of course respond to any request that comes directly from the Court.

That is, Ballantine claimed that Bromwich had affirmatively confirmed this content.

But Bromwich very pointedly refused to do so.

For what it’s worth, I think the content has not been altered, but the redactions do misrepresent the notes. But according to Bromwich, Ballantine made that claim even though he had pointedly refused to confirm the accuracy of the notes or transcription.

Update: And now Strzok says that they didn’t confirm the content either. 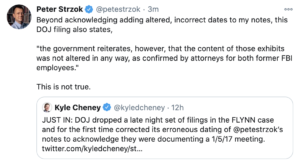 That’s more problematic in his case, because there are so many more transcripts.

Update: The same thing happened with Strzok (though his lawyer did alert Ballantine to her docket/exhibit problems I noted in this post).

Ballantine emailed Goelman at 4:05 on Sunday with the same request. He responded at 3:38 PM on Monday, telling her they could not confirm authenticity of these notes without the originals. He also noted that Ken Kohl misrepresented the meaning of one of Strzok’s texts in the hearing before Judge Sullivan.

Sorry not to get back to you until now.  We have looked at the attachments to the email you sent yesterday (Sunday) afternoon.  We are unable to certify the authenticity of all of the attachments or the accuracy of the transcriptions.  To do so, we would need both more time and access to the original notes, particularly given that U.S. Attorney Jensen’s team has already been caught altering Pete’s notes in two instances.  However, we do want to call your attention to the fact that Exhibit 198-11 is mislabeled, and that these notes are not the notes of Pete “and another agent” taken during the Flynn interview.

Additionally, we want to register our objection to AUSA Ken Kohl’s material misstatements to Judge Sullivan during the September 29, 2020, 2020, telephonic hearing, during which Mr. Kohl inaccurately represented that Pete viewed himself as an “insurance policy” against President Trump’s election.

So basically both of them refused to affirm that the notes were authentic. But she made the claim anyway.

Shorter DOJ: We Made Shit Up … Please Free Mike Flynn The Altered Andrew McCabe and Peter Strzok Documents Were Packaged for Circ...