The Andrew McCabe notes just certified on Monday as a regular FBI document have at least four and, I think, more irregularities. This kind of graphic analysis is not my forté, so I’m going to just post what I think the irregularities are, and invite some people who are better at this to test my hypotheses.

Here’s an annotated version of the McCabe notes (here’s the original). Below, I’ll describe what I think I’m seeing. 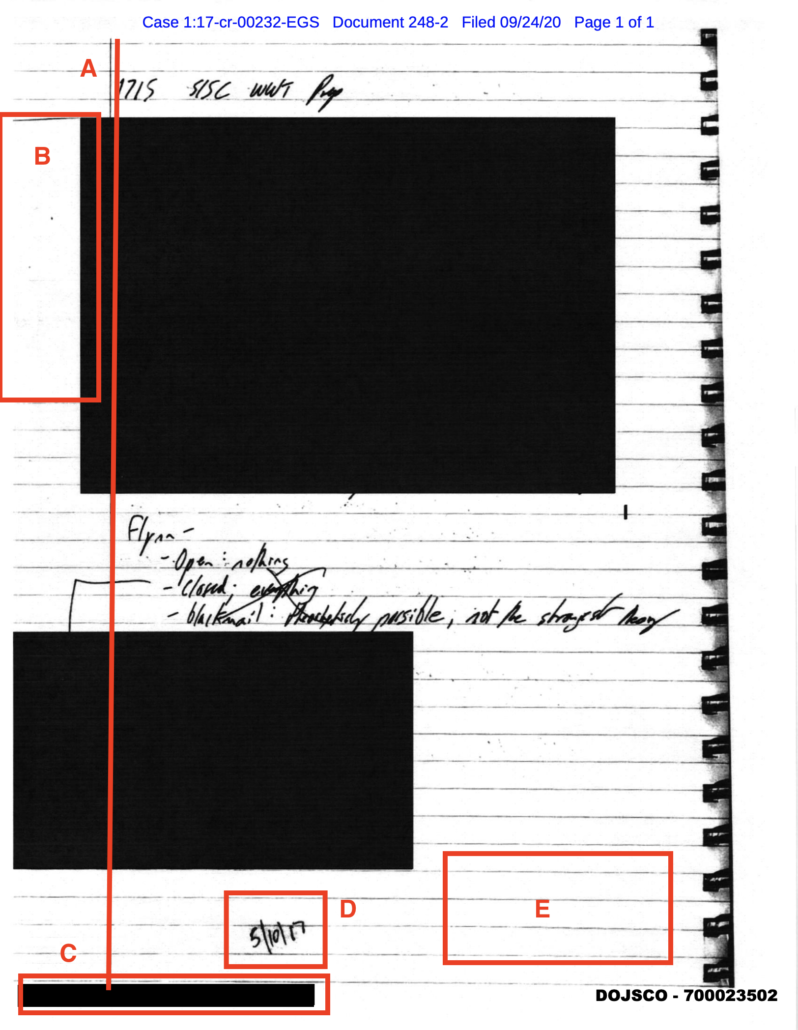 A: Update: a reader has convinced me I’m wrong about this — see below.

B: There’s a non-horizontal line drawn to the margin to the left of where the first big redaction begins. Below it, the horizontal page rules don’t appear for about nine lines.

C: As noted here, the footer reading, “SUBJECT TO PROTECTIVE ORDER,” has been redacted. It would be restored in the re-altered version authenticated on Monday.

D: As DOJ has now admitted, someone — and DOJ has not told Judge Emmet Sullivan what government agent it was — added a date. DOJ claimed this was done with a clear sticky with a blue tab, but there’s no sign of the blue tab. Moreover, when the document was re-altered to remove the date, that was accomplished by digitally whiting it out (not the technical term!), leaving a clean white rectangle with no rules.

This document got released after a dispute between McCabe and the FBI about whether he can access his own notes. After the Senate Judiciary Committee promised Andrew McCabe he could review his notes before testifying before the committee in early September, and after McCabe’s lawyer Michael Bromwich engaged in what he believed to be a good faith discussion about obtaining those documents on September 15, on September 16, FBI told the Committee that the request was “unmanageably voluminous;” the Committee passed that determination onto McCabe’s team. On September 18, McCabe’s lawyers worked with FBI’s OGC to narrow the request. One thing FBI lawyers were balking at, categorically, was providing McCabe’s calendars. In addition, they complained that if McCabe reviewed his own notes, he would have access to material beyond Crossfire Hurricane materials (as this page has). On September 23 — the day this document was provided to Flynn’s lawyers by DOJ, according to discovery correspondence — FBI for the first time raised a categorical objection, stating that, the FBI “has a policy of generally not providing documents to former employees and does not see a basis to make an exception to that policy under these circumstances.”

If McCabe had access to his own notes and calendar, he would be able to tell whether this document has been altered beyond the date addition. On the day DOJ sent it out, they decided that McCabe could not be provided access to any of his own notes or calendars so he could provide accurate testimony to Congress.

Update: I have a request for comment from FBI’s press office regarding the lack of a declassification stamp.

Update: I have asked the Senate Judiciary Committee (which was supposed to have had McCabe testify earlier this month) for their copy of this set of McCabe notes, to see if we can make sense of the document. I am awaiting a response.

Update: A reader with expertise in the area provides these notes anonymously:

A. yes, the tilt with the line (to the left) at top left, normally would be compensated for with less visible binder rings at bottom right. (to which there is more showing) so its backwards.

B. Yes, agree. The line looks like it was hand drawn. And if you zoom in at 400% in the middle of the red box B) you can see an additional line, very faint. Whited out some way.

C. if you zoom in at 400% at the redaction box, it may have been redacted twice. There are two corners at top left, that are not lined up and same issue at lower right. If they were, it would look like one, clean cornered box.

D. the lines on each side of the date are fainter and in the same distance from each other implying that there was some kind of clear sticker put on top with a handwritten date in the center. When scanning light bounces off the sides of any clear plastic tab, mylar etc. and reflects and fades out whatever is next to it.

If you zoom in at 400% in between each of the 3 lines at the lower left (just above the redaction box) there are other faint lines, which make no sense.

At the 3 lines above the handwritten text “possible”, it looks like there was some handwritten text there before, the dot patterns resemble writing that was there once upon a time. Can’t prove it. I don’t have iText redaction software to see if that would show editing (it may be capable or may not), but the scanner would also have to have extra dirt on that area, and doesn’t have the same intensity of dot/dirt scatter as the rest of the white spaces on the rest of the page. Same issue under the 3-6 lines under the text “not the strongest”.

Update: A different reader, who also asks to remain anonymous, sends this screencap of the document pulled into Photoshop and darkened, which (the person explains) can show things that aren’t otherwise readily apparent. The person added a ruler which, I think, shows I’m wrong about the left margin. I’ve crossed out that observation above accordingly. 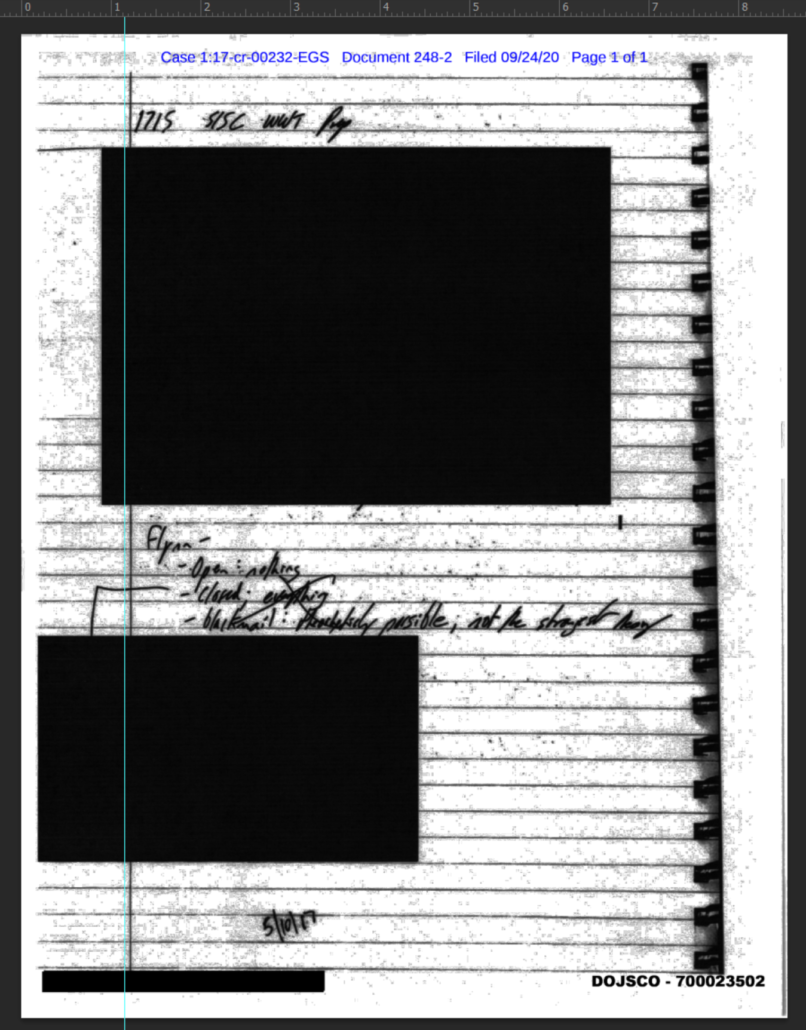