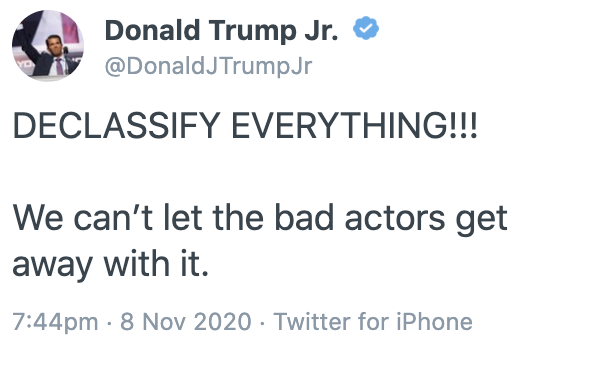 Yesterday, Don Jr tweeted out a demand that someone — Daddy, maybe? — “declassify everything.” 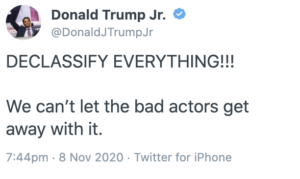 I guess the failson believes there are secret facts that will change the reality that his Daddy just lost an election by the same Electoral College margin Trump beat Hillary by in 2016, with an even bigger popular vote loss than he suffered in 2016.

Given Jr’s belief that releasing classified information can save him, though, it’s worth revisiting testimony that former Sputnik propagandist Cassandra Fairbanks gave at the Julian Assange extradition hearing.

She testified under oath that, a month after President Trump would have learned that the Mueller team was investigating the Roger Stone-led effort to pardon Julian Assange — an effort that seems to have implicated Don Jr, too — Don Jr’s close friend Arthur Schwartz told Fairbanks that there would be no fucking pardon for Assange. Schwartz proceeded to give Fairbanks accurate, secret information about the grand jury investigation into Assange. She also testified vaguely that Schwartz said “other persons … might be affected” including people he referred to as “lifelong friends,” a reference she took to mean Don Jr.

In early 2019, Fairbanks traveled to London to share this secret grand jury information with Assange in person. So Schwartz’ leak played a role in the target of a criminal investigation learning secret details about that investigation.

At the very least, DOJ must be investigating how grand jury information got leaked and how Schwartz got that information to leak.

tweets from our circle
Ed Walker 🍞🌹💉💉@MasaccioEWRT @PicadioAntonio: @espinsegall Two Catholic Bishops have denied Holy Communion to Biden and Pelosi for being pro choice. Does anyone thin…1 hour ago22 May 2022
emptywheel@emptywheelThat Clinton Tweet Could Lead To a Mistrial (or Reversal on Appeal) emptywheel.net/2022/05/22/tha…4 hours ago22 May 2022
emptywheel@emptywheelRT @JonWalkerDC: Should be a bigger deal CPAC went to Hungary to basically teach conservatives how to end democracy in practice4 hours ago22 May 2022
bmaz@bmazNot a Smart foul. Jeez, and now a T on Smart.7 hours ago22 May 2022
bmaz@bmazI thought only LeBron got to blithely travel like that.7 hours ago22 May 2022
emptywheel@emptywheelRT @AlexMartin: DDoSecrets is releasing approximately 128,500 emails allegedly from Hunter Biden's laptop - which they say are "being distr…11 hours ago21 May 2022
emptywheel@emptywheelI missed this bc I was actually covering the case, but I do hope Tesla doesn't go under before Sussmann has a chanc… twitter.com/i/web/status/1…12 hours ago21 May 2022
Ed Walker 🍞🌹💉💉@MasaccioEWRT @cascamike: the progressive agenda was fully embraced by the democratic party for three months at the beginning of 2021. approval rating…12 hours ago21 May 2022
Jim White@JimWhiteGNVWe feast tonight! The butts cooked faster than expected., but will hold safely wrapped in foil and in a cooler unti… twitter.com/i/web/status/1…17 hours ago21 May 2022
Ed Walker 🍞🌹💉💉@MasaccioEWRT @RepKatiePorter: 🥩 4 companies control 85% of the beef market 🫘 4 companies control 80% of the soy market 🍝 3 companies control 78% of t…22 hours ago21 May 2022
Ed Walker 🍞🌹💉💉@MasaccioEWRT @sarahkendzior: A thread from a year ago23 hours ago21 May 2022
RayneToday@raynetodayRT @darth: i know this is completely unrelated but imagine spending nine fuckin hours with that guy1 day ago21 May 2022
Jim White@JimWhiteGNVWho’s ready for baseball at the end of the rainbow? pic.twitter.com/QWJZZK5LpC1 day ago20 May 2022
Jim White@JimWhiteGNVMore than fifty folks from the church are signed up to eat pulled pork in my back yard tomorrow evening. Fortunatel… twitter.com/i/web/status/1…2 days ago20 May 2022
Jim White@JimWhiteGNVSays the man who just disenfranchised many voters of color. Just fuck off with your hypocrisy. twitter.com/GovRonDeSantis…2 days ago20 May 2022
RayneToday@raynetodayRT @wyatt_privilege: Not a mind blowing observation but the game now is to send crazy shit upstairs to scotus and invite them to remold, sc…3 days ago19 May 2022
RayneToday@raynetoday~ding-ding-ding~ Accurate. twitter.com/robinmarty/sta…4 days ago18 May 2022

Trump’s Enablers Are Mistaking an Insurgency for an Off-Ramp Afraid? Who, Us? We’re Not Afraid!