In the last two days, Trump has prepared a coup of sorts. First, he fired Mike Esper and replaced him with Christopher Miller; several of Esper’s top deputies went with him. Then, Trump installed three different Devin Nunes flunkies at several places in the DOD bureaucracy:

To be clear, unlike these others, Christopher Miller, the Acting Secretary of Defense, reportedly does care about US security, even if he’s several ranks too junior for the job and got appointed over a Senate confirmed Deputy.

But the Nunes flunkies are there, serving as gate-keepers for the hoaxes favored by Trump and Nunes, as they have done so successfully throughout Trump’s term.

Spook-whisperer David Ignatius reports that these changes come amidst a sustained debate about what to do with a piece of likely Russian disinformation that — Trump and feeble-minded partisans like Lindsey Graham believe — will prove that Russia didn’t prefer Trump over Hillary.

President Trump’s senior military and intelligence officials have been warning him strongly against declassifying information about Russia that his advisers say would compromise sensitive collection methods and anger key allies.

An intense battle over this issue has raged within the administration in the days before and after the Nov. 3 presidential election. Trump and his allies want the information public because they believe it would rebut claims that Russian President Vladimir Putin supported Trump in 2016. That may sound like ancient history, but for Trump it remains ground zero — the moment when his political problems began.

CIA Director Gina Haspel last month argued strongly at a White House meeting against disclosing the information, because she believed that doing so would violate her pledge to protect sources and methods, a senior congressional source said. This official said a bipartisan group of Republican and Democratic senators has been trying to protect Haspel, though some fear that Trump may yet oust her.

Rumors have been flying this week about Haspel’s tenure, but a source familiar with her standing as CIA director said Tuesday that national security adviser Robert C. O’Brien and White House Chief of Staff Mark Meadows had both “assured her that she’s good,” meaning she wouldn’t be removed. Haspel also met personally with Senate Majority Leader Mitch McConnell (R-Ky.) Tuesday. She sees him regularly as a member of the “Gang of Eight” senior congressional leaders. But Tuesday’s visit was another sign of GOP support.

Haspel’s most unlikely defender has been Attorney General William P. Barr, who opposed a pre-election push to declassify the sensitive material, according to three current and former officials. At a showdown meeting at the White House, Barr pushed back against revealing the secret information.

Gen. Paul Nakasone, who heads U.S. Cyber Command and the National Security Agency, has also argued vehemently against disclosure, according to a senior defense official and the senior congressional source. Like Haspel, Nakasone took the unusual step of directly opposing White House efforts to release the intelligence, because he feared the damage that disclosure would cause.

With the new changes, General Nakasone reports through Cohen-Watnick and Patel and will have to rely on the legal “advice” of Ellis. So not only does this move put more senior votes in favor of declassifying this intelligence, but it puts them in places where Nakasone might be forced to accede to these demands.

Reporting suggests that Trump is seeking to make the full intelligence behind the reports described here available. Fundamentally, the intelligence shows that the US government obtained a Russian intelligence report that stated in late July 2016 — John Ratcliffe says it was July 26 but by handwriting it appears to be July 28 — Hillary approved of a plan to vilify Trump for his dalliance with Russian intelligence. 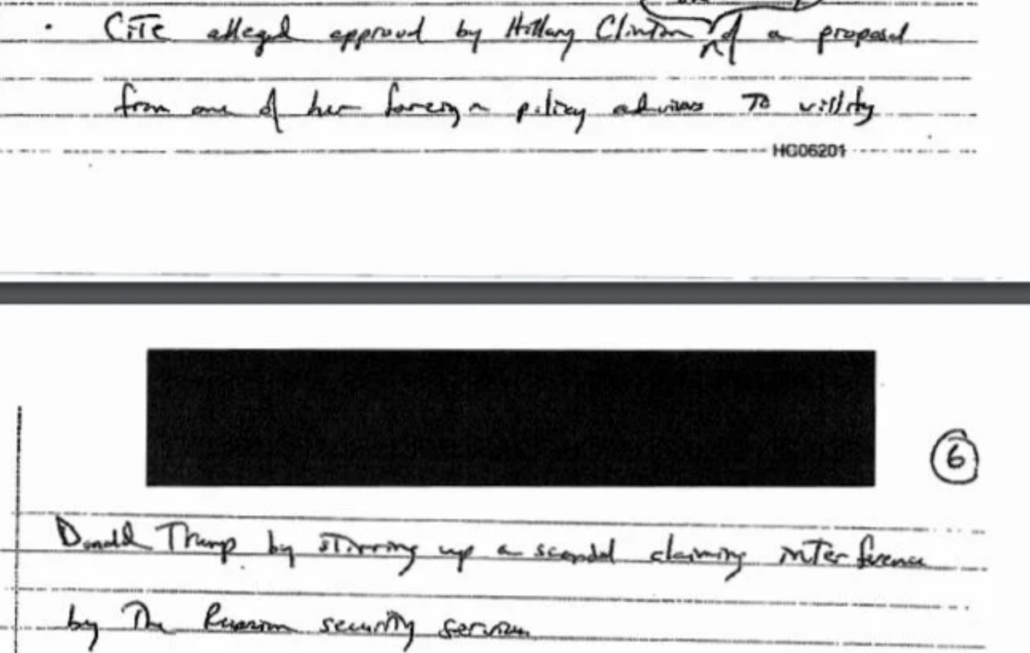 Already, this is a stupid hoax from the Republicans. It is public that, in the wake of the DNC release on July 22 — and particularly after Trump’s “Russia are you listening” comment on July 27 — Hillary started focusing on Trump’s coziness with Russia. In other words, the crack Russian analysts would have to do no more than read the paper to come to this conclusion. Nor would there be anything scandalous about Hillary trying to hold Trump accountable for capitalizing on an attack on her by a hostile foreign country.

I think Republicans are trying to suggest — by altering a date (July 26 instead of July 28) again and breathing heavy — that former government official Hillary Clinton was the reason why the FBI opened an investigation into Trump, rather than the Australians informing the US about Coffee Boy George Papadopoulos bragging about Russia offering help back in May. There’s not a shred of evidence for it, of course, but that has never stopped the frothy right.

The far more interesting part of this intelligence comes in the report that Peter Strzok wrote up, which is dated September 7. It makes it clear that Hillary’s alleged attack pertained to Russian hackers, notably Guccifer 2.0.

So a Russian intelligence report the US stole from Russia in late July 2016 claimed that, on July 26 0r 28, Hillary approved an attack on Trump pertaining to having help from Russian hackers, a report that did not get formally shared with the FBI until September 7. And either the report itself or FBI’s interpretation of it focuses on Guccifer 2.0.

Somehow this is the smoking gun — that over a month after opening up Crossfire Hurricane the FBI started investigating a claim that, starting on July 26 or 28, Hillary thought Trump was cuddling up with Russian hackers, interpreted by someone to be Guccifer 2.0 — the FBI learned that fact.

When I first wrote this up, I hadn’t started my Rashomon Rat-Fucker series, to say nothing of my report to the FBI that an American I knew may have served as an American cut-out for the Guccifer 2.0 operation (I’m jumping ahead of myself, but I’m certain the FBI investigated that claim for at least a year). At the time, I focused on how prescient the frothers were making Hillary look for anticipating that Roger Stone would first start doing propaganda for Guccifer 2.0 on August 5; best case for the frothers in this situation is that Stone somehow learned of the Russian report before the FBI did.

But now that I’ve written those posts, it’s clear that not only did the FBI have strong circumstantial evidence that Stone knew of the Guccifer 2.0 operation even before the first Guccifer 2.0 post, because he was searching for it on June 15 before the WordPress site went public, but that Stone probably had a face-to-face meeting with someone at the RNC from whom he got advance notice of the DNC drop.

In July 2016, this report is only mildly interesting, amounting to showing that the Russians read the newspaper like everyone else.

In 2020, after details from the Mueller investigation have become public, the Russian report makes far more sense as deliberate disinformation, an attempt to turn a direct contact with Stone into a hoax about Hillary.

Which makes Trump’s apparent determination to liberate this document all the more telling. It suggests that he wants to make public something, anything, he can use to counter what will be very damning allegations when this all becomes clear.

And, given how shoddy the actual intelligence itself is (at best showing that Russian intelligence officers read public sources and more credibly showing that Russia was building plausible deniability for contacts with Roger Stone in real time), Trump’s insistence on it, whether intentional or not, would serve to blow highly sensitive collection for a third-rate hoax.

I can see why Trump would prioritize this intelligence on his way out that the door. It comes at a time when he can be easily manipulated to burn the IC in ways that can only serve Russian interests.

In other words, one of Trump’s top priorities for the Lame Duck period is to give Vladimir Putin a consolation prize.

The Last Time Billy Barr Ordered a Politicized Investigation, DOJ Altered Documents... Those Complicit in Trump’s False Story about the Election Are Willingly...