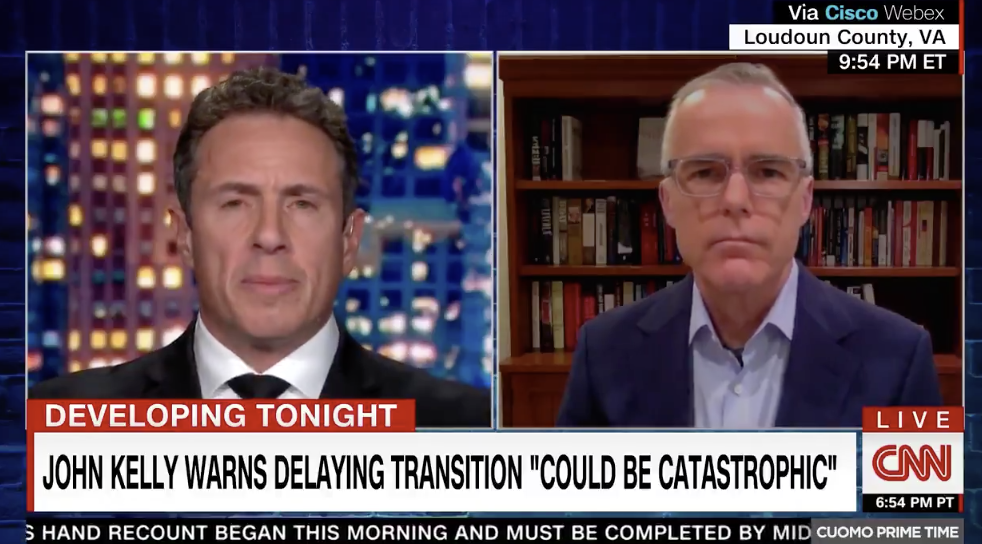 Andrew McCabe was on Chris Cuomo’s show last night, talking about Trump’s reported plan to release more sensitive intelligence about the Russian investigation. A number of people have asked me about it, so I thought I’d talk about what he did and did not say. First, my transcription:

Cuomo: … the next leading theory, other than just payback, is he wants a lot of stuff from the Russia investigation declassified because he’s been told by Nunes and others, “the more comes out the more it would look you were framed.” Uh, what’s the risk there, if a lot of stuff comes out? We’ve talked about sources and methods. But let me reverse the question: from your knowledge, is there anything that could come out that people would look at it and say, “Wow, I can’t believe they ever included the President in this analysis. He and his people clearly did nothing.”

McCabe: There is some very, very serious, very specific undeniable intelligence that has NOT come out that, if it were released, would risk compromising our access to that sort of information in the future. I think it would also risk casting the President in a very negative light. So does it — would he have a motivation to release those things? It’s almost incomprehensible to me that he would want that information out. I don’t see how he spins it to his advantage because, quite frankly, I don’t believe it’s flattering.

Cuomo: You think there’s more bad stuff about him that we don’t know?

McCabe: There is always more intelligence — there was a lot more in the intelligence community assessment than what was ever released for public consumption. I mean, the original version of that report was classified at the absolute highest level I have ever seen. You’re talking about Top Secret, Compartmentalized Code Word stuff, and it would be ver–it would be tragic to American intelligence collection for those sources to be put at risk.

First, note that McCabe at first didn’t answer Cuomo’s question, which was basically whether there was anything that would substantiate Trump’s claims to have been framed. Instead, he first says that there’s stuff that if it were released, would have a permanent impact on US intelligence collection. Only after saying that does McCabe say there’s stuff that McCabe doesn’t believe is “flattering” that would “risk casting the President in a very negative light.” Cuomo picks up on that and asks if there’s more bad stuff about Trump that we don’t know (as if CNN has covered even the public stuff that puts Trump in a very bad light, which they have not). McCabe responds by addressing only the Intelligence Community Assessment completed by early January 2017. He then describes the ICA using terms that describe the most sensitive stuff coming from a variety of different collection sources, without specifically saying that this is about Trump, or if it is, whether it involves something that Trump did rather than something that was said about Trump.

It’s possible this stuff refers to more compromise by women. After all, the SSCI Report (which benefitted more from CIA and NSA information than it did from FBI information) found more examples — three — than were known about Trump’s possible sexual compromise when in Russia, and the section is preceded by two redacted pages.

It may also include details about Trump’s 2013 trip associated with Miss Universe, which the SSCI Report also provides damning new details about.

Another likely topic pertains to Russia’s profiling of Trump as a potential asset. The SSCI Report leaves his usefulness as a money laundering vehicle almost unmentioned and similarly limits mention of Trump’s ties to the mob (though it does include the latter in several places, such as this discussion of his 2013 trip and this discussion of warnings about the Agalarovs). But if the IC had the kind of collection as sensitive as McCabe says, it likely includes discussions of how easy it would be to stoke Trump’s narcissism to get him to work contrary to America’s interests.

There’s one more thing it likely includes. As I observed when it came out, the Mueller Report does not discuss — at all — Trump’s interactions directly with Putin, not even his meeting at the G20 where they discussed adoptions in advance of Trump crafting a June 9 denial for his failson that focused on adoptions. In my never-ending fascination with what gets classified, the Andrew Weissmann book also makes no mention of that meeting, even though he discusses the adoption cover story at length. If that weren’t really sensitive, he should have been able to argue that the meeting was public, not least given that Trump confessed it himself in an NYT interview. Trump and Putin are not known to have met before he became President. Nevertheless, there must be a corpus of intelligence of “about” collections in which Trump’s cultivation by Putin are discussed.

Still, most of that isn’t about what Trump did — aside the same financial corruption and serial sexual philandering he has done in the US. It’s about what Russia thinks of Trump. Which is consistent with it not being “flattering” rather than being described as “damning.”

McCabe doesn’t talk about the damning information that FBI would have found between the time the ICA came out and the time the investigation into his closest associates ramped up. And that stuff is likely more interesting.

tweets from our circle
bmaz@bmazOMG, just saw one of most favorite persons ever, @lizzwinstead on TV! Some of the best internet ever was 50 Questio… twitter.com/i/web/status/1…32 minutes ago03 July 2022
Jim White@JimWhiteGNVRT @JimWhiteGNV: I'm so old I remember when an area substacker used to call for outing anonymous sources who lie. Still waiting for a call…37 minutes ago03 July 2022
bmaz@bmazWhat in the hell is wrong with Sonmez? twitter.com/feliciasonmez/…39 minutes ago03 July 2022
bmaz@bmazRT @kentsomers: Cesar Chavez athletic director fed up with football 'recruiting' in Twitter blast azcentral.com/story/sports/h… via @41 minutes ago03 July 2022
Jim White@JimWhiteGNVRT @Patchman513: In November of 2018, I had my 4th Open Heart Surgery. I got a custom jersey with the number 4 and Patchman on the back and…1 hour ago03 July 2022
bmaz@bmazShe is right: twitter.com/awfulannouncin…2 hours ago03 July 2022
Jim White@JimWhiteGNVRT @AdamSerwer: This left wing political correctness is getting out of control twitter.com/kylegriffin1/s…2 hours ago02 July 2022
emptywheel@emptywheelI think Shadi is, generally, right about winning magnanimously. But it seems if winning ugly were a problem Al Go… twitter.com/i/web/status/1…3 hours ago02 July 2022
RayneToday@raynetodayRT @MaelstromMinded: Alright, we need to have a come to Jesus about conventions. When you say you "need" to go for work, I'm gonna need y'a…4 hours ago02 July 2022
Ed Walker 🍞🌹💉💉@MasaccioEWRT @PaulHRosenberg: With issue dominance like this, how can Dems NOT win the future? Simple answer: Younger voters don't trust them vs corp…4 hours ago02 July 2022
RayneToday@raynetodayJust as we hope every same-sex couple understands how degraded and humiliated uterus-endowed people feel having the… twitter.com/i/web/status/1…3 days ago30 June 2022
RayneToday@raynetodayRT @mike10010100: OHHHH *that's* why people are desperately spreading anti-Biden shit.3 days ago30 June 2022
RayneToday@raynetodayFeels like a tipping point has been reached. twitter.com/Acosta/status/…4 days ago28 June 2022