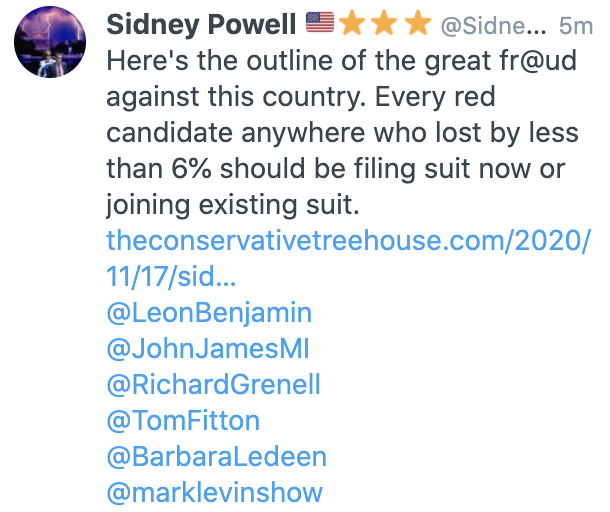 Yesterday, GA’s Republican Secretary of State Brad Raffensperger used various means to push back on the Republicans who were trying to cheat to win. In addition to a genuinely useful thread from Erick Erickson debunking one after another conspiracy theory about GA’s vote, he gave an interview to the WaPo detailing how his Republican colleagues have been pressuring him.

He called Doug Collins (who, remember, campaigned with all the Trump felons) a liar.

The normally mild-mannered Raffensperger saved his harshest language for Rep. Douglas A. Collins (R-Ga.), who is leading the president’s efforts in Georgia and whom Raffensperger called a “liar” and a “charlatan.”

Collins has questioned Raffensperger’s handling of the vote and accused him of capitulating to Democrats by not backing allegations of voter fraud more strongly.

“I’m an engineer. We look at numbers. We look at hard data,” Raffensperger said. “I can’t help it that a failed candidate like Collins is running around lying to everyone. He’s a liar.”

Raffensperger also said he spoke on Friday to Graham, the chairman of the Senate Judiciary Committee, who has echoed Trump’s unfounded claims about voting irregularities.

Raffensperger said he was stunned that Graham appeared to suggest that he find a way to toss legally cast ballots. Absent court intervention, Raffensperger doesn’t have the power to do what Graham suggested because counties administer elections in Georgia.

“It sure looked like he was wanting to go down that road,” Raffensperger said.

As a number of people have pointed out, it’s a crime under GA law to solicit election fraud.

Meanwhile, Sidney Powell continues her effort to drum up support for undermining democracy. In a tweet this morning, she included Lindsey Graham staffer Barbara Ledeen among her co-conspirators. 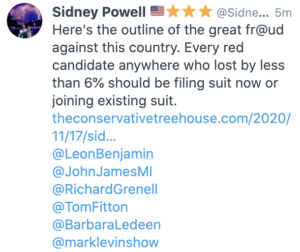 In addition to working with Mike Flynn to try to reach out to hostile foreign governments in hopes they had hacked Hillary’s emails, Ledeen’s spouse, Michael, was the first person Flynn called when he was trying to figure out how to undermine sanctions on Russia.

I honestly believe that Lindsey does all this because his mind has rotted and people like Ledeen have told him so many lies he believes it. But now he’s entering a potentially criminal racket.

Ockham’s Cut: How the Andrew McCabe Notes Were Doctored “Looking Forward” Will Be Harder for President Biden than It Was...