In the wake of the Flynn pardon (the details of which remain uncertain), the frothers are repeating the fictions about the investigation into Flynn that were obviously false in May, when they first started, and have been affirmatively debunked since. Flynn’s son is central to those stories. As a reminder, the claim is that Flynn Sr took a plea deal not because his very credible defense attorneys had counseled him he faced up to 15 years for hiding that he was on Turkey’s payroll during the campaign, but because Mueller threatened his son. Implicit in that claim is that Mike Jr didn’t have any real criminal exposure of his own, but Mueller was nevertheless threatening to trump up an investigation into the failson in November, when his dad took the deal.

Even in General Flynn’s sworn declaration, though, the claim is only that Flynn’s son would be indicted.

But a warrant recently unsealed in the case suggests that from the start of the investigation, Mike Jr was a focus of the investigation. Along with Flynn himself and Flynn’s partner Bijan Kian, Flynn Jr was subpoenaed for the devices he used in his Flynn Intelligence Group work in July 2017. We know this warrant is his because it was sent to Barry Coburn, who represented the son, because it refers to the father as Michael T. Flynn throughout (which is necessary to distinguish Michael G from his father), and describes the target of the warrant as Flynn’s chief of staff, a role the son played.

Like his father and Kian, Flynn Jr had refused to comply with a subpoena for his devices, and had given his phone to his attorney for safe-keeping. Mueller’s team got warrants for all three as a way to force the attorneys to turn over the phones of their clients.

Unlike the others though, Flynn Jr also got subpoenaed for testimony. His attorney responded by proffering that Flynn Jr would invoke the Fifth Amendment. Among the questions Flynn Jr’s lawyer at least said he’d refuse to answer were:

Prosecutors seemed to be pushing Flynn Jr to appear before the grand jury and invoke the Fifth question by question — but it’s unclear what did happen.

One way or another, however, General Flynn’s son’s lawyer was telling Mueller’s prosecutors as early as July that answering questions that would cover his trip to Russia for the RT gala would incriminate him.

That suggests it wasn’t just Flynn’s lawyers at Covington who believed, four months later, that Flynn Jr might be at risk of prosecution.

Update: Mike Flynn Jr has become a Twitter fan of mine. Last night he assured me there was zero chance he’ll ever be indicted. 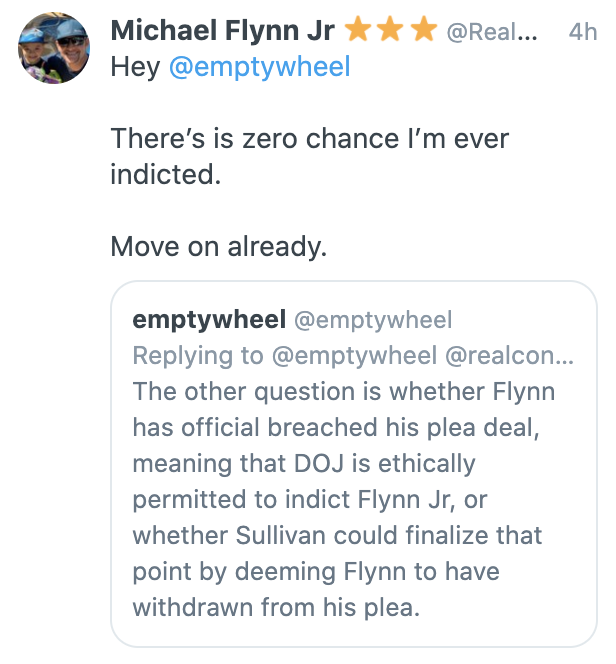 I may be misunderstanding, but this seems to suggest that Daddy’s claims he only pled was to keep Jr out of trouble — as asserted by Flynn in a sworn statement, above — are false. I mean, he may be accusing Pops of perjury, which seems to be an odd way to celebrate a pardon.

White House Statement Suggests Flynn Has Been Pardoned ONLY For the Charge He... Through Turkey Giblets to the Stars