He Slipped The Surly Bonds Of Earth: RIP Chuck Yeager 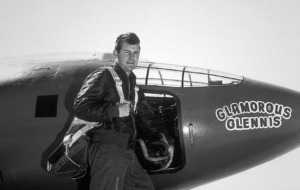 “Oh, I have slipped the surly bonds of earth,
And danced the skies on laughter-silvered wings;
Sunward I’ve climbed and joined the tumbling mirth of sun-split clouds –
and done a hundred things You have not dreamed of –
wheeled and soared and swung high in the sunlit silence.
Hovering there I’ve chased the shouting wind along
and flung my eager craft through footless halls of air.
“Up, up the long delirious burning blue
I’ve topped the wind-swept heights with easy grace,
where never lark, or even eagle, flew;
and, while with silent, lifting mind I’ve trod
the high untrespassed sanctity of space,
put out my hand and touched the face of God.”

That is from the poem “High Flight” by John Gillespie Magee, Jr. It was written in 1941, but it surely envisioned the later life and exploits of Chuck Yeager. Later that year, in December, Magee, a pilot in the RCAF, and his Spitfire collided with another plane over England. Magee, only 19 years old, crashed to his death. He could not have known the reach of his poem over all the years, nor how it might describe another pilot, Chuck Yeager. But it did.

Yesterday, Chuck Yeager passed away at the age of 97. He was a true American hero in every sense. The first human to break the speed of sound. Arguably the finest test pilot in history.

He first stepped into a cockpit during World War II after joining the Army Air Forces directly out of high school. By the end of the war, he was a fighter ace credited with shooting down at least 12 German planes, including five in one day. Making the military his career, he emerged in the late 1940s as one of the newly created Air Force’s most revered test pilots.
….
He later trained men who would go on to join NASA’s Gemini and Apollo programs. Throughout his life, he broke numerous speed and altitude records, including becoming the first person to travel 21/2 times the speed of sound.
….
His greatest breakthrough occurred on Oct. 14, 1947, when a B-29 aircraft released then-Capt. Yeager and his squat, orange Bell X-1 experimental craft at nearly 20,000 feet over California’s Mojave Desert. The Bell X-1 was propelled by a four-chamber rocket engine and a volatile mix of ethyl alcohol, water and liquid oxygen, and Gen. Yeager named it “Glamorous Glennis” after his first wife. Gen. Yeager, traveling at nearly 700 mph, broke the sound barrier.
….
Not that Gen. Yeager’s career lacked its frightening moments. While he was able to pull out of at least one situation in 1953, when his plane spun out of control for 50,000 feet, he wasn’t so lucky in 1963 when, after reaching near space, he ejected from an NF-104 and suffered burns that required several surgeries.

After the last incident in that WaPo quote, Yeager got back in and kept flying. Because that is who and what he was.

Go read the entire WaPo obituary, it is, and this is an understatement, the stuff of legend. Yeager was also the glue that held together the famed book “The Right Stuff” by Tom Wolfe. Forget the movie, read the book. I cannot find my copy right now, but the stories in it are wonderful, and the best ones were arguably about Yeager, who trained the early astronauts but never became one. He did not want to be a proverbial monkey in a cage, so he kept on as a test pilot and fighter pilot.

As Wolfe would paint in his book:

“He was going faster than any man in history, and it was almost silent up here, since he had exhausted his rocket fuel, and he was so high in such a vast space that there was no sensation of motion. He was master of the sky.”

“The most righteous of all the possessors of the right stuff: Chuck Yeager.”

Yes. Quite a man.

The Intercept’s Silence about Edward Snowden’s Inclusion in Julian... Judge Sullivan Uses Mike Flynn Dismissal to Emphasize His Own Authority