A Most Ordinary Passing of A Most Extraordinary Writer 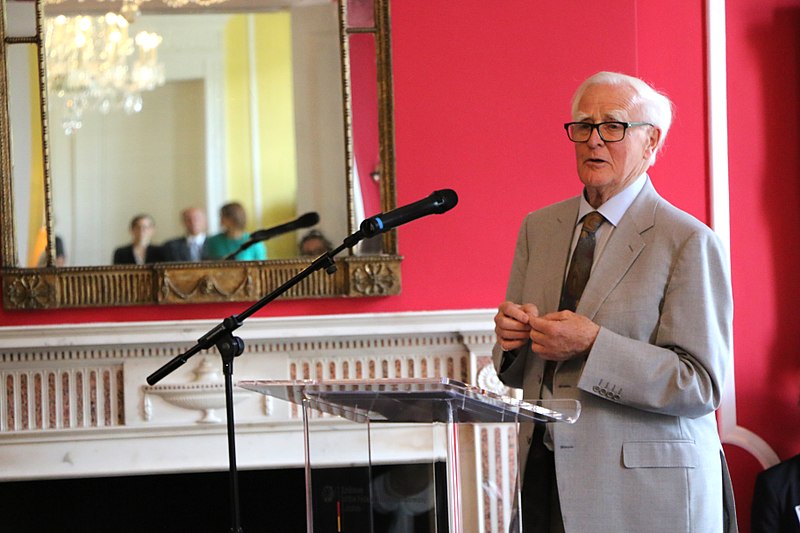 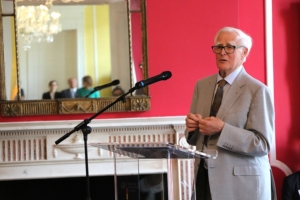 I don’t remember when I first read John Le Carré – sometime in the late 70s or early 80s, probably after watching the BBC miniseries of his novel Tinker, Tailor, Soldier, Spy when it was shown on PBS. The genre was ostensibly a spy thriller, but it was not like other spy thrillers then in circulation.

Consider the central character of George Smiley, whom Le Carré introduces like this:

Mr. George Smiley was not naturally equipped for hurrying in the rain, least of all at dead of night. . . Small, podgy and at best middle-aged, he was by appearance one of London’s meek who do not inherit the earth. His legs were short, his gait anything but agile, his dress costly, ill-fitting and extremely wet. His overcoat, which had a hint of widowhood about it, was of that black, loose weave which is designed to retain moisture. Either the sleeves were too long or his arms too short for, . . . when he wore his mackintosh, the cuffs all but concealed the fingers. For reasons of vanity he wore no hat, believing rightly that hats made him ridiculous. “Like an egg cosy,” his beautiful wife had remarked not long before the last occasion on which she left him, and her criticism as so often had endured. Therefore the rain had formed in fat, unbanishable drops on the thick lenses of his spectacles, forcing him alternately to lower or throw back his head as he scuttled along the pavement which skirted the blackened arcades of Victoria Station.

Not to put too fine a point on it, but George Smiley is not James Bond, Jack Ryan, or Jason Bourne.

To my great delight, Le Carré wrote characters who are so delightfully ordinary, grappling with concerns and issues equally ordinary, even while dealing with concerns and issues that were extraordinary in the extreme. Yes, he wrote of the secret world of spies and the not-so-secret world in which they do their spying, but there were shades of gray all over the place, making his writing much more engaging than folks like Fleming or Clancy. Le Carré’s novels, set in the cold war and post-cold war world, explored loyalty and betrayal, failure and success, enemies and allies (and associates who are neither), and human frailty and strength, and I loved the way he made me explore those very same things.

John Le Carré passed away last night from pneumonia at age 89 – a most ordinary passing of a most extraordinary writer.

One of the things that grabbed me initially in his writing is the utter absence of over-the-top James Bond-ish spy gadgets that appear at just the right moment to rescue the hero or the mission. Similarly, his novels are not filled with physically strong and athletic heroes like Jason Bourne, but ordinary folks with bad backs, heart problems, and old injuries that slow them down. Most of all, the stories explore notions of empire (lost ones, struggling ones, and ones looking to emerge) and individuals, unafraid to ask difficult questions about one’s own nation or self, and face the flaws that emerge with the answers.

Another thing that drew me in was the manner in which he described the world of government. I had just finished serving as an intern at the State Department, and the world of Tinker, Tailor rang true. Yes, the government of which he wrote was English, not American, and most of the people in the stories were in the secret services, not the diplomatic service, but nevertheless, the way he described them fit my limited but at that time very fresh experiences in DC. Here were government employees who had to worry about their budgets, who had to negotiate (or fight) bureaucratic battles with other departments, who had to wrestle with how much (or how little) to tell their bosses or their allies, and who had to deal with the Ordinary Stuff of life while also dealing with Very Important Stuff at work.

But most of all, Le Carré was a great storyteller. One indication, from his obituary at The Guardian: “The world of “ferrets” and “lamplighters”, “wranglers” and “pavement artists” was so convincingly drawn that his former colleagues at MI5 and MI6 began to adopt Le Carré’s invented jargon as their own.” When the spies themselves are so drawn in to the story you are telling about spies, you’re doing it right.

Le Carré is also indirectly responsible for drawing me to Emptywheel, many years ago.

In Tinker, Tailor, Le Carré spins a tale of the unmasking of a Russian mole embedded in the higher reaches of the British secret service known as “The Circus.” The Honourable Schoolboy is the sequel, in which Smiley and his colleagues have to deal with the aftermath of all the security breaches exposed in the earlier book. Near the opening, Smiley gathers the remains of the Circus leadership, and after displaying in excruciating detail the extent of the damage done to the Circus, Smiley points to the way forward:

The premise, said Smiley, when they had resettled, was that Haydon [the mole] had done nothing against the Circus that was not directed, and that direction came from one man personally: Karla [head of the Russian secret service].

The premise was that in briefing Haydon, Karla was exposing gaps in Moscow Centre’s knowledge; that in ordering Haydon to suppress certain intelligence that came the Circus’ way, in ordering him to downgrade or distort it, to deride it, or even to deny it circulation altogether, Karla was indicating which secrets he did not want revealed.

“So we can take back-bearings, can’t we, darling?” murmured Connie Sachs [the ancient head of the Russian desk at the Circus], whose speed of uptake put her, as usual, a good length ahead of the field.

“That’s right, Con. That’s exactly what we can do,” said Smiley gravely. “We can take the back-bearings.” He resumed his lecture, leaving Guillam [another senior spook], for one, more mystified than before.

By minutely charting Haydon’s path of destruction (his pug marks, as Smiley called them); by exhaustively recording his selection of files; by reassembling — after aching weeks of research, if necessary — the intelligence culled in good faith by Circus outstations, and balancing it, in every detail, against the intelligence distributed by Haydon to the Circus’s customers in the Whitehall market-place, it would be possible to take back-bearings (as Connie so rightly called them), and establish Haydon’s, and therefore Karla’s, point of departure. Said Smiley.

Once a correct back-bearing had been taken, surprising doors of opportunity would open, and the Circus, against all likelihood, would be in a position to go over to the initiative — or, as Smiley put it, “to act, and not merely to react.”

Call me crazy, but isn’t that a perfect description of what Marcy does here at Emptywheel, supported by other frontpagers and the EW commentariat? Read the documents, read between the lines of the documents, compare these documents with those documents, look at what is said and what is not said, build the timelines, and pretty soon you’ll see what someone doesn’t want you to see.

After years of being enthralled by Le Carré, how could I not get drawn in to this place?

To a most extraordinary writer, at his most ordinary passing.