“Dems in Disarray” as the GOP Fractures over Trump

When I wrote this post, laying out what I perceived to be the urgent need to cure the GOP of the spell Trump has them under, I intended to premise the solution — the means by which Dems and others could encourage such a break — on the political calculus of those Republicans who’ve enabled him for four years. A sufficient number of Republicans need to want to break that spell.

Given how events of the last few days are beginning to fracture GOP unity (the “Dems in disarray” in the title is a sarcastic reference to how commentators always portray things in the worst light for democrats), I thought I’d lay out that premise in a stand-alone post.

Yesterday, even before the Georgia results were in, WaPo chronicled how Trump’s push for an unconstitutional challenge to the election today has splintered GOP unity.

President Trump is effectively sabotaging the Republican Party on his way out of office, obsessed with overturning his election loss and nursing pangs of betrayal from allies whom he had expected to bend the instruments of democracy to his will.

Trump has created a divide in his party as fundamental and impassioned as any during his four years as president, with lawmakers forced to choose between certifying the results of an election decided by their constituents or appeasing the president in an all-but-certain-to-fail crusade to keep him in power by subverting the vote.

Trump’s intensifying drive to overturn the election results has deepened a GOP divide on Capitol Hill. McConnell last month urged Republican senators not to object to the electoral college vote certification in Wednesday’s joint session. But now that 13 have said they would, the leader has stepped back from any significant effort to tamp down the brewing rebellion. He is not whipping votes and has not spoken to Trump in weeks.

In conversations with other Senate Republicans, McConnell has stressed that their decision now will be a matter of conscience and that each senator should vote the way he or she has to vote, according to two senior GOP officials who spoke on the condition of anonymity to relay the majority leader’s private posture.

Some Republican senators have expressed concerns that voting to certify — and against Trump — would open them up to a primary challenge from the right, while others worry that voting to object would make them vulnerable in a general election, a person familiar with the deliberations said.

“I think it is revealing that there is not a single senator who is arguing that the election was stolen from President Trump,” said Josh Holmes, an outside adviser to McConnell. “The divide in the party is whether it’s appropriate to pull the pin on an electoral college grenade, hoping that there are enough responsible people standing around who can shove it back in before they detonate American democracy.”

Then, at a time when a huge proportion of House Republicans and a shameful number of Senators were on the record supporting Trump’s arson attempt, Democrats appear to have pulled out both Senate seats in Georgia. While the corruption of and racist attacks from both Republicans hurt their own chances — especially a Kelly Loeffler attack on Raphael Warnock’s sermons, a direct attack on Black faith — there’s good reason to blame Trump.

With some exceptions for David Perdue, Democrats improved their performance county by county based on lower relative turnout from Republicans. Trump might like to claim that turnout fall-off is due to him not being on the ballot, but it’ll be easy for Republicans to argue, with reason, that it’s just as likely that Trump’s efforts to delegitimize the vote led people to stay home. All the more so given that the county where he held a rally the other night, underperformed turnout in the rest of the state. 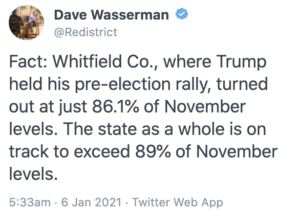 So even if it weren’t true, it’d be in the self-interest of career Republicans to blame all this on Trump, which is beginning even before the race is formally called for Jon Ossoff.

“Trump is the cause of this, lock, stock and barrel,” said one Republican strategist. “But when you’re relying on someone to win you a Senate race that also lost statewide eight weeks prior, you’re not in a position of strength.”

The immediate recrimination is emblematic of the complicated GOP dynamics that have emerged after Trump’s loss in the November election. Fissures are forming as Republicans decide whether it’s useful to cling to Trump — even as he tries to subvert an election — or to distance themselves. And if the Georgia races are any indication, it appears Republicans are willing to turn on Trump if he can’t reliably turn out the vote for candidates in the months and years ahead.

Importantly, there were already a number of Republicans who would have liked to turn on Trump if he didn’t have the power to make them regret that (and I expect we’ll hear stories of the means by which Trump commanded such unthinking loyalty in the days ahead). With Republicans out of power in DC, that’s all the more true. Republicans will undoubtedly try to limit the number of victories Biden enjoys, but they will have fewer means to do so going forward.

And Trump’s attempted coup is only going to exacerbate that. Since most Republicans committed to a position before the Georgia results — a decision Trump forced on a number of people, including Loeffler and Perdue, to their potential disadvantage — it will solidify pre-existing fracture lines. Yes, Republicans will blame Trump. But Republicans in Congress will also blame each other, particularly in the Senate.

All that creates a very different landscape in DC, if Biden and Democrats in Congress can exploit it. Some fraction of Republicans in Congress will have an incentive to burn Trump to the ground.

Update: This profile of what a dog-shit choice Trump has given Republicans today focuses on something I’ve been thinking a lot about: Michael Cohen’s warning to Republicans in his OGR testimony about how badly things were going to work out for them.

Michael Cohen, Trump’s former attorney and fixer, whose fealty landed him in prison, feels like he’s watching a reprise of his own demise.

“I warned Mark Meadows at my oversight hearing. I warned the Jim Jordans,” he said, referring to his congressional testimony from less than two years ago as well as Trump’s current chief of staff and other notably pro-Trump GOP House members. His message: “I know what you’re doing. I know the Trump game plan, because I wrote it, and it didn’t work out for me. And it’s not going to work out for you.”

“Donald Trump,” he said, “will push people to the brink, and unless they want to end up disbarred and imprisoned and financially ruined, like what Trump did to me, they better open their eyes.”

“Each of the Republicans that have signed on to Trump’s chaos are not doing it out of loyalty to Trump,” Cohen said. “They’re not doing it because they even believe in what Trump is doing. They’re doing it because they fear his Twitter wrath and believe that the supporters, the base of Trump supporters, will vote against them in any upcoming election for not siding with Trump. This is more about their survival than anything else. And that’s sad and pathetic.”

Not only will Cohen’s warnings of the downsides of coddling Trump be prescient in some foreseeable cases, but as Trump loses the power of the Presidency, the upside for making his loyalty oaths will have diminishing value. If something tarnishes Trump’s brand significantly (in my first post, I suggested financial setbacks and state prosecutions could do that), the value of allegiance to Trump could go south precipitously.

And that would have the effect of making these public oaths of loyalty backfire.