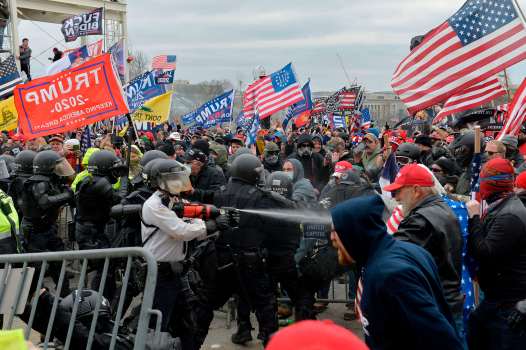 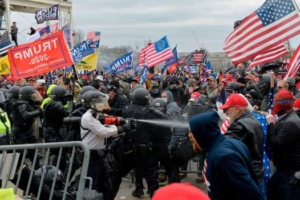 TOPSHOT – Trump supporters clash with police and security forces as they try to storm the US Capitol in Washington, DC on January 6, 2021. – Demonstrators breeched security and entered the Capitol as Congress debated the a 2020 presidential election Electoral Vote Certification. (Photo by Joseph Prezioso / AFP) (Photo by JOSEPH PREZIOSO/AFP via Getty Images)

[Hi, bmaz here, I am posting this from our beloved Roving Reporter Rosalind. She knows a bit about highly charged security issues, give it a read please.]

I spent my 20s and 30s working in large-scale concert production working for rock promoter Bill Graham Presents, dealing with crowds from 20,000 to 60,000 people packed into one defined area. In preparation for each show production staff would go through a procedure called “advancing the show”. As most tours were routed east to west, our production manager would call the band’s production manager after the tour had been underway and go through the production rider – the contract detailing the staging requirements – to confirm details and cover any surprises that had cropped up. Added equipment that made the truck pack go slower triggering overtime, feuding band members who needed their dressing rooms separated, a health issue requiring a local doctor to be on call backstage.

The most critical staff member for advancing the show was our Head of Security. She would call her counterpart at a venue where the band had already played to get their after-show report. At the end of each show the Security Head writes up the report detailing any arrests, what charges, how drunk, how many security staff were assigned, what time alcohol sales were cut off, what time the gates opened, what procedures were used to screen the crowd, notes on anything that should be done differently the next time. Each show required a different security set-up, based on the audience profile.

As most acts toured every summer, a level of institutional knowledge built up about what to expect but you never took anything for granted. When you have 20,000 people in the audience and 200 security staff keeping watch, the art of crowd psychology becomes critical to ensuring a safe event. Add in gravity, with the audience angled up, if anything triggered an unexpected mass movement down there would be no way of stopping it.

To keep things in control, you start at the gates, doing a thorough search to catch contraband items, especially anything that can be used as a weapon. Alcohol sales are monitored and cut off early if people are over-indulging. You start the show on time, end it on time. Security watches the crowd, not the show, ready to step in quickly should anything pop up. The key is to catch a situation before it has a chance to spread. At the end of a show the audience may see those in front suddenly move into the aisles and head down to the stage to dance and sing and exult in their proximity to their idols. While this may look like a moment of spontaneity, 95% of the time this is a pre-planned maneuver called “releasing the aisles”. It is done in coordination with band security, allowing the audience a release while keeping everyone safe. The other 5% of the time is when a performer, often an overnight sensation who has never before played to a huge venue, gazes up at her 20,000 adoring fans and invites them to “come on down!!” (looking at you, Madonna). Security has to spring into emergency action to keep the audience within their sections and prevent an out of control stampede.

Watching the horror unfold on January 6th in Washington, D.C. at our People’s House has prompted my memories of how to conduct proper security, and how not to. As soon as I saw the barricade set-up I got a pit in my stomach, correctly predicting someone would get crushed and suffocated or trampled to death. I immediately flashed back to my worst concert experience from a crowd safety standpoint: a Neil Young & Pearl Jam show at The Gorge Amphitheatre in Washington State.

The show was put on by a different promoter, and my friend and I were there to see the show and hang with our friends on the band production staff. When it was close to showtime we made our way to the area in front of the stage and looked at each other in alarm. Before us was a standing room area, then a steep cliff, then a large section of bleacher seats perched at the top overlooking. The lower standing room area was bisected by temporary fencing to carve out a VIP section at the very front. The people behind were literally forced to look through a fucking fence to see the stage. You now have a pissed off section of audience wanting to be up there in first class and not stuck back here in steerage. Worse, the temporary fencing was poorly installed and in one look we knew it would never hold. A man on the other side of the fence agreed, and we watched as he walked along the perimeter, methodically punching it every few feet, the security guard oblivious. It was obvious he was testing for the weakest link, and the moment the show started he would make his move. Meanwhile way up top a man began to climb down the cliff face, holding onto bits of shrubbery, until gravity took hold and he plummeted down landing at the back of steerage. The crowd roared. Another man immediately stepped up to take the plunge.

My friend and I ran backstage and explained the situation to our band production buds, begging them to get the promoter to take down the temporary fencing, but for whatever reasons they did not share our concern. We went back out front and watched and waited. The moment the band hit the stage the recon guy threw his full body weight into the fence, toppling it over onto people on the other side, trapping them underneath where they got trampled as people poured through the hole. At the same time body after body came plunging down the cliff, landing in a heap. My friend and I pushed to the front of the stage, waving our arms wildly, screaming at the band, trying to get their attention, the crew’s attention. Finally they stopped the show and tried to calm the crowd while personnel went to the aid of the people crushed under the fence. Injured people carried out, remaining fence taken down, steerage merged in with first class, the show restarted.

That the promoter made it out of that show with only broken bones and no deaths is nothing short of a miracle. In the aftermath, the Gorge was completely re-done, the cliff dug out to turn it into a more conventional amphitheatre configuration. I hear it’s beautiful. I haven’t been back.

As the country grapples with the ongoing repercussions of the Trump insurrectionists, the pressure for a knee jerk reaction to the security failure is gonna be huge. To encase the Capitol in a barricade bubble with armed security on every corner. This will be a tragic mistake. There will be much more to come out in the weeks ahead to fill in the who, what and why. But what’s already known shows that the Trumpists have been “testing the fences” for months and years now, zeroing in on the weak links in full view. Preparing for the start of show, and the moment their Glorious Leader invites them all to storm the stage.

We do not need a massive increase in the number of police personnel. We do need a massive increase in thinking outside the conventional box. To be pro-active, and stop trouble in its tracks before it can spread. Unfortunately, tragically, almost all levers of power in our Country have worked together to soften and excuse the growing crisis of Americans taking up arms to promote their white supremacist beliefs and QAnon conspiracies, standing by as the groups target our fellow citizens for violence. That any politician or law enforcement official can profess shock at the Capitol Siege is to confess their sin of complicity before the world. They watched the toxic clouds erupt all across our nation, streaming towards D.C., but told themselves soothing fairytales to sleep at night. They’ve now awoken to our collective nightmare where democracy destroying extremists are embedded at every level of our society, from law enforcement to the top tiers of government. And we will be forced to work furiously to counteract this poison for years to come.

Back at Bill Graham Presents, we did not prepare security plans for a particular concert based on the color of the audience’s skin, or their political beliefs, or social standing. We based it on verifiable facts, a proven track record and shared information to keep our decisions rooted in current events. There are hundreds of trained concert security personnel sitting at home, waiting for the touring industry to re-start. I say we bring a brigade of these folk to D.C. to consult with Congress and the District of Columbia leadership on ways to re-think crowd control and security. To make them better understand the intricacies of crowd psychology and mob psychology. To illustrate how the current protest preparations are flipped, with the “audience” that has a proven track record of being peaceful is deemed violent and gassed & smashed before they’ve made it through the front gate, while the “audience” storming State Capitols is given a light pat down and friendly smile.

The first area I’d welcome rock’n’roll security is on either side of the new metal detector inside Congress. I guarantee you not one single shitheel Republican will be able to arrogantly push their way past or sneak a loaded gun into the Chamber. Our crew don’t let any unauthorized motherfuckers backstage.