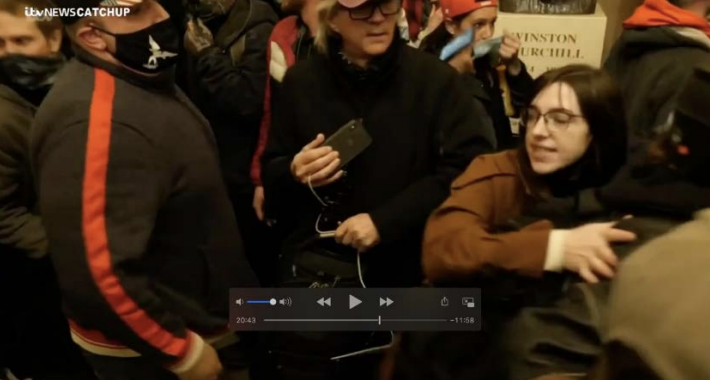 A number of outlets (Politico may have been the first) are reporting on the story of Riley June Williams, who was charged (but not arrested) yesterday in crimes related to the January 6 insurrection. The paragraph of her arrest affidavit that has gotten the most attention describes how a witness (Witness 1) told the FBI that he or she had seen a video depicting Williams stealing a laptop or hard drive from Pelosi’s office with the intent of selling it, via a third person, to Russian intelligence.

I wanted to look at the background to that story.

First, the investigation into Williams may have started when Witness 1 called into FBI tip lines “in the days following” the insurrection.

In the days following the January 6, 2021, events, a witness (“W1”) made several phone calls into the FBI’s telephone tip line related to the U.S. Capitol attacks.

In them, the caller stated that he/she was the former romantic partner of RILEY JUNE WILLIAMS (“WILLIAMS”), that he/she saw WILLIAMS depicted in video footage taken on January 6, 2021, from inside the U.S. Capitol Building

The affidavit doesn’t say, but it is possible that Witness 1 first saw Williams in videos posted of that day, and then started calling Williams’ friends, which led to the discovery of the Pelosi laptop story. There’s no mention in the affidavit of a more extensive interview with Witness 1– just multiple tips pointing to online videos and the claim that “friends” of Williams showed Witness 1 a video. The laptop video does not appear in the affidavit (nor is there any indication it has been posted publicly). Its existence, then, is all filtered through the credibility — or not — of Witness 1.

I have spoken with local law enforcement agents in Harrisburg about their recent interactions with WILLIAMS’ parents. According to those officers, on January 11, 2021, local law enforcement received a suspicious persons report filed by WILLIAMS’ mother. Officers arrived at the address that WILLIAMS shares with her mother and interviewed her mother. WILLIAMS was not present. According to WILLIAMS’ mother, the suspicious person was assumed to be W1. WILLIAMS’ mother, with officers present, used her cell phone to place a video-enabled phone call to WILLIAMS. Officers observed WILLIAMS on her mother’s cell phone screen and noted that WILLIAMS was wearing a brown-colored jacket, consistent with the screenshots above.

Williams’ mom told reporters — but not, apparently, the FBI — that her daughter had just recently gotten involved in “far right message boards.”

The reporter then interviewed a woman who identified herself as WILLIAMS’ mother and showed her some type of video footage. WILLIAMS’ mother then stated that she recognized her daughter inside the U.S. Capitol Building and that her daughter had taken a sudden interest in President Trump’s politics and “far right message boards.” She claimed that WILLIAMS “took off,” “is gone,” and is waiting for law enforcement to come to WILLIAMS and ask her about her activities in the Capitol .

Even though this affidavit suggests Williams’ mom called the FBI about former partner Witness 1, it seems that on some date not described in the affidavit, Williams skipped town and took precautionary measures.

It appears that WILLIAMS has fled. According to local law enforcement officers in Harrisburg, WILLIAMS’ mother stated that that WILLIAMS packed a bag and left her home and told her mother she would be gone for a couple of weeks. WILLIAMS did not provide her mother any information about her intended destination. Sometime after January 6, 2021, WILLIAMS changed her telephone number and deleted what I believe were her social media accounts on Facebook, Instagram, Twitter, Reddit, Telegram, and Parler.

Williams’ dad, who doesn’t live with her mom (though he does live in the Harrisburg area), drove to and from the rally with her, but was not with her during the day.

According to the Harrisburg officers, on or about January 16, 2021, officers called WILLIAMS’ father who resides in Camp Hill, PA. He stated that he drove to Washington, D.C., with WILLIAMS for the protests on January 6, 2021. He stated that his daughter and he did not stay together throughout the day and that WILLIAMS was meeting up with other individuals she knew at the protests. WILLIAMS later met up with her father outside of the U.S. Capitol Building, and they returned home to Harrisburg together.

I raise all this to suggest that there are at least two narrators here — the mom, who called the FBI about the former partner and not the far right friends, knew where her daughter was but now says she’s gone, and the former partner, who claims to have known what friends Williams was with but who also might have been recently dumped — who should not be trusted unquestioningly. And the dad appears to have his own ties to this world.

All that’s particularly important background for what is likely the more important detail in the affidavit: Williams was directing traffic inside the Capitol, and directing mobs up a staircase to Pelosi’s office.

She has brown shoulder length hair and wears eyeglasses. She is wearing a black face mask below her chin, around her neck. She can be heard in the video repeatedly yelling, “Upstairs, upstairs, upstairs,” and can be seen physically directing other intruders to proceed up a staircase.

I have also reviewed maps of the interior areas of the U.S. Capitol and confirmed the subject appears to have been in an area near “the crypt,” sometimes referred to as the “Small House Rotunda.” In the audio of the ITV News video, the reporter states that the recording took place near the U.S. Capitol Building area called “the crypt.” In the background of the top screenshot above, a bust of Winston Churchill is visible behind the subject, which is also consistent with the location in the “Small House Rotunda.” The maps confirm that there is a nearby staircase, which leads to the office of the Speaker of the United States House of Representatives, Nancy Pelosi.

The stolen laptop may or may not exist (though, as Peterr notes below, Pelosi told Lesly Stahl one was stolen). It may or may not be headed to Russian intelligence (though it did make me think of reports on a Russian tie to far right activists in Lancaster, PA leading up to the election).

But a far better documented part of this story is that this woman, whose mother claims is new to this scene, was already in a position to be briefed on and directing traffic the day of the attack.

Updated with the clip to replace the video.

Update: This video appears to show a Pelosi laptop being taken. And this tweet shows “Riley” claiming to have Pelosi’s hard drives.

The Press Continues to Help Billy Barr Whitewash His Complicity in January ... But His Emails! Kushner’s Unique Exposure under the Presidential Records...